The People’s Progressive Party (PPP) is alleging that 85 of the 212 Region Four ballot boxes which have been recounted thus far, show distinct variations from the numbers presented by Region Four Returning Officer, Clairmont Mingo, during that district’s tabulation. 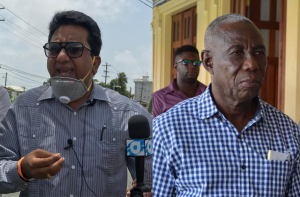 PPP Executive, Anil Nandlall met with reporters yesterday at the National Recount Media Centre, to talk about what he termed “Mingo’s fraud”. Nandlall said that for those 85 boxes, Mingo has reduced the PPP’s votes by 686, and has increased APNU+AFC’s votes by 4,415.
Nandlall also said “The boxes, as they are being completed, continue to confirm the accuracy of the statements of poll published by the People’s Progressive Party (PPP) in every material way.”
It is evident, as Nandlall said, that the statements of recount continue to vindicate the statements of poll published by the PPP, save and except for slight variations attributed to previously rejected votes being considered as valid, and vice versa.
However, Kaieteur News is yet to verify the accuracy of all of the figures the party claims Mingo presented, as it has not supplied audio/video evidence.
Asked about the PPP’s method of recording Mingo’s figures, Nandlall said that the party made notes, and that it is also in possession of audio and video clippings. Nandlall said that the party will release those recordings for verification purposes. He also challenged GECOM to release Mingo’s spreadsheets.
So far, Kaieteur News has tabulated information for 21 ballot boxes. Four of these were taken from a preliminary report on Guyana’s General and Regional Elections by Head of the Electoral Observer Mission of the Organisation of American States (OAS), Bruce Golding. Seventeen were taken from audio evidence published by one of The Citizenship Initiative’s Executive Members, Shaz Ally.
Kaieteur News’ analysis shows that Mingo’s tabulation, for those 21 boxes, subtracted 331 votes from PPP/C, and added 978 votes to APNU+AFC. This amounts to a total variance of 1,309 votes from the corresponding statements of poll, for those boxes. This cluster of boxes all came from villages on the East Bank of Demerara.

PPP: That's right. If you talk the talk, you should walk the walk. Why is the PNC not refuting any of the PPP accusations against Dingo Mingo attempted fraud?

Can someone post Anil interview with the media yesterday, the last part was hilarious, and goes something like this:

Anil:   Can you get PNC to post a single SOP for us to see

Reporter:  Ah working on it

Anil:  Ah wish you the best of luck

PPP: That's right. If you talk the talk, you should walk the walk. Why is the PNC not refuting any of the PPP accusations against Dingo Mingo attempted fraud?

Perhaps Mingo is just a pawn. Should the PPP get into power, will they have the capacity and use it to go after the intellectual authors? I doubt it.

Reducing the PPP's tally by 686 is too glaring and increasing the APNU/AFC by 4415 is an insult to all Guyanese.

No wonder Granger said that he would accept the result no matter what.

Totaram, are you taking notes?   Waiting for your response....

Playing right into the hands of GECOM's ultimate declaration.

Playing right into the hands of GECOM's ultimate declaration.

What else is new?

What else is new?

Some of these people will buy maggot vomit if the PNC sold it to them.

Guyana is now a big joke of a country. Every day APNU people are in the media trying to peddle Lies to steal the election. The former President And Mingo are hiding from the public. The Gang of thieves from the government are willing to put their personal bank accounts before the needs of the country.  And Claudette Singh is fully supporting them.

Guyana has gone for channa.

As pointed out by Ramkarran, ANUG's lawyer, four (4) options remain: 1. CCJ does have jurisdiction, but say that the COA was right in...
27 minutes ago

Says the constitutional law expert. Lowenfield IS an important part of the equation by virtue of the Gazetted Order, the PRA and...
38 minutes ago

Salam Chief. I think you mean disease.
40 minutes ago

If I were him I would just stay quiet and move along. He already got the biggest gift by not being prosecuted for murder or murder ...
54 minutes ago

hate is a decease
2 hours ago

History of Caribbean Community
1 hour ago