It was a pity that there could be only one winner, but both Bent Street, who became the first team to ink its name as champions and Sparta Boss beaten finalist, produced a sensational final as the inaugural Magnum ‘Mash Cup’ Competition ended in breathtaking fashion on Sunday at the National Gymnasium. 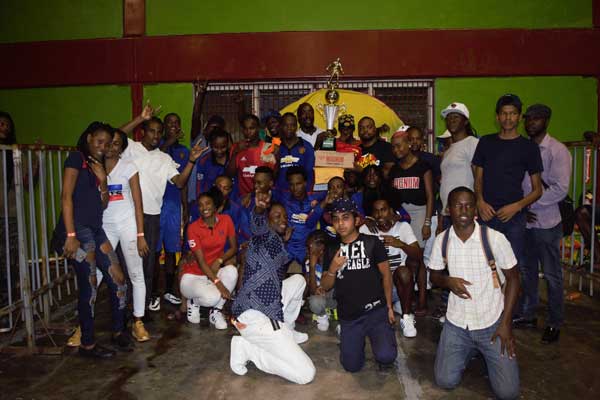 Played before a packed house, the two teams did not disappoint and treated the fans to a thrilling brand of futsal that will undoubtedly be etched in the memories of those who were present for a long time.
In the end, Bent Street kept their recent good run against Sparta Boss by edging them 3-2 in a penalty shootout after regulation and extra times failed to break a dramatic 2-2 deadlock.
Not to be outdone, Leopold Street were pushed to the brink in their clash against Linden’s Silver Bullets, before prevailing 7-6 in another gripping  encounter to take the third place playoff in an affair that set the night on fire.
In the feature game, both teams showed their intent very early with the respective goalkeepers being brought into action almost immediately, having to produce spectacular saves to keep the score sheet untroubled.
First Daniel Wilson’s thunderbolt from about 20 yards out was denied by an alert Akel Clarke between the uprights, while newly-recruited Jermin Junor responded with a rasping right-footer that required a stunning save from the opposition’s shot stopper.
However, the introduction of substitute Ryan Hackett for Bent Street paid immediate dividend as he took full advantage of being left unmarked and hammered a fierce shot past the stranded goalkeeper in the 12th minute.
It came courtesy of a pass delivered from the left flank across the goal by Solomon Austin.
Undaunted by the setback, Sparta Boss continued to push forward in numbers and three minutes later got their reward when the speedy and skilful Junor was setup by Gregory Richardson and he finished with sheer power on the near post.
The half came with the scores remaining deadlock at 1-1 and all to play for in the final period.
After another exciting period where both teams kept their supporters on the edge of their seats, Sparta Boss edged ahead when Junor completed a brace by firing one past the opposing goalkeeper in the 42nd minute to send their devotees into wild celebrations.
Once again the game would invoke more drama when Kelsey Benjamin netted the equalizer to ignite euphoria among their fans.
In the end, no team managed to score another goal and penalty kicks was the next course of action.
That too had its fair share of excitement, before Bent Street prevailed to capture $400,000 and the championship trophy, while Sparta Boss waltzed away with $200,000 and a trophy.
The third place playoff was a duplication of the grand final as both Leopold Street and the young exciting unit named Silver Bullets stood toe to toe and traded goal after goal, before superior experience paid off for the former.
They were led to victory though a hat-trick from Okanie Fraser, who is clearly the most lethal striker in the futsal format right now.
Fraser fired in goals in the 7th, 11th and 23rd minutes to lead the way to victory and the $100,000 prize, while Silver Bullets returned to the bauxite community with $50,000.

In the night’s full results:

Apart from Magnum among the other sponsors of board were Trophy Stall, STP Investment, Oasis Water, Oasis Café and National Sports Commission.

Sign In To Reply
Post
Current Visitors: 30 (5 members, 25 guests)
Welcome to the Original Guyanese Discussion Forums, first established in 1996. Here you can discuss, ask questions or generally debate anything related to politics, movies, music, health or just gyaff away your day/night here. A note of warning, the Political forum is not for the faint of heart.  We do have some rules, so please adhere to them .
Do not post any messages that are obscene, vulgar, sexually-orientated, racist, hateful, threatening, or that otherwise violate any laws. Do not post any messages that harass, insult (name calling), belittle, threaten or mock other members.
Do not use profanity, racial, ethnic, religious, or other slurs and stereotypes, or post sexually-oriented material, masturbatory and excretory references, or any other offensive material.

Join Now
Kapadulla Wood replied:
Police force is BIG part of the troubles...it attracts vagabonds, hustlers and pushers. They are either covering for rigged elections or...
Kapadulla Wood replied:
Likka is always a money waster...but back in de days University at de Corner of Liberty Ave gave out diplomas. Don't know how thriving...
Irfon Ali replied:
give me bais a break. dey have to cover up PPP crimes
Spugum replied:
she "lil currupt" that's all
Spugum replied:
i don't care where you are. you should try to be accurate about what the report says he shot the young lady so stop trying to distract...
Irfon Ali replied:
dem bais wasting dem money and making de rumshop owner rich
Gov’t says ‘actively reviewing’ recommendations made by UN rights commissioner in December last year -had not replied to her letter
16 minutes ago

Three discharged over murder of Tain woman
2 hours ago