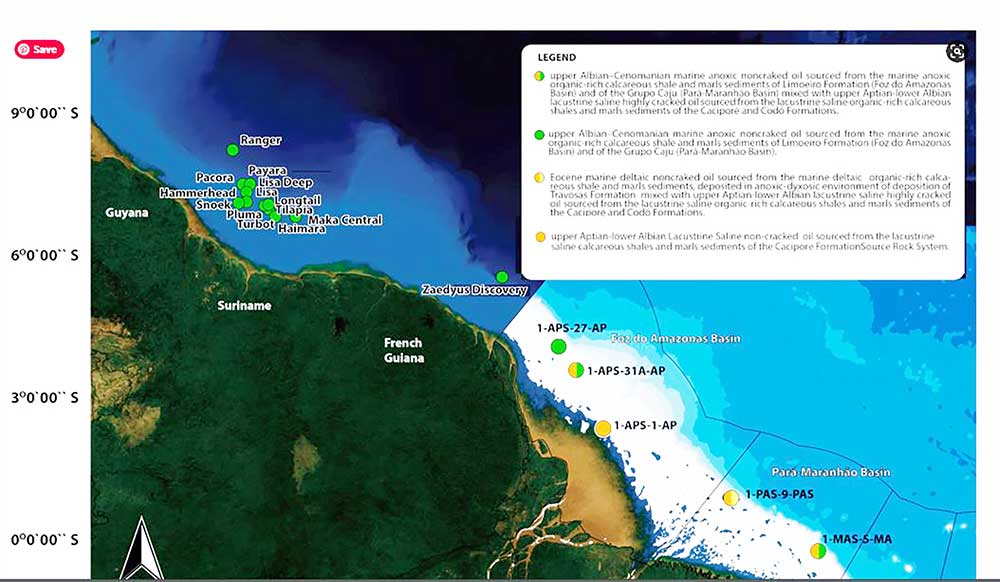 Map showing the location of the petroleum systems identified in shallow-water sub-commercial exploration wells in the Foz do Amazonas and Pará-Maranhão basins. (Source BPS)

Kaieteur News – The massive discoveries offshore Guyana, Suriname, and French Guyana have not only wowed Brazilian study groups but motivated some to conduct deeper assessments of what similar potential may lie in their country’s offshore basin.

One such group that embarked on such a study was the Brazil Petroleum Studies (BPS). This body over the last few years has been offering several regional studies which provide a better understanding of the petroleum systems of offshore Brazilian basins.

According to BPS, it recently completed an integrated petroleum system study of the Brazilian Equatorial Margin and the results clearly show that the plays, associated elements, processes of the petroleum systems identified in Guyana and Suriname are identical to those present in the Foz do Amazonas and Para-Maranhão basins. These two basins are located in ultra-deep waters near the Brazilian Equatorial Margin. (See map attached to article).

The discoveries that are of particular interest to BPS and which motivated the latest assessment include the giant deep-water Liza, Payara, Turbot, Ranger, Liza deep, Snoek, Pacora, Longtail, Hammerhead, Pluma, Tilapia and Haimara fields in Guyana; as well as the Maka and Sapakara fields (discovered by Apache in Suriname) and the Zaedyus field (discovered by Tullow in French Guyana).

BPS went on to note that the study of the Equatorial Margin went far beyond conventional seismic and well-data mapping by applying state-of-the-art basin modeling and Advanced Geochemistry Technology (AGT) to oil samples recovered in the Foz do Amazonas and Para-Maranhão basins.

It explained that these source rock systems overlap each other, which may enhance the efficiency of the hydrocarbon generation pods and migration charges. Furthermore, the fact that these distinct source rocks have different activation energies increases the chances of obtaining multiple charge pulses over a potentially wide time-window, drastically boosting the potential for successful entrapment in the reservoirs, BPS stated.

Taking the foregoing into consideration, along with the new state-of-the-art 2D seismic data acquired by TGS in the Foz do Amazonas and Para-Maranhão basins, BPS said it is left to conclude that “the region could be a sleeping supergiant deep-water hydrocarbon frontier.”

It should be noted that the said data supported the incorporation of the offshore concessions into the list of approved 92 exploration and production blocks that Brazil had put up for sale in its 17th bid round.

They were subsequently removed as environmental groups started to protest against drilling in the region after the discovery of a coral reef in the turbid waters at the mouth of the Amazon River. The groups said drilling could damage the reef and affect marine life in the area.

The claims have gained even more weight during the coronavirus pandemic, which has made companies reevaluate environmental issues amid calls for greater reductions in greenhouse gas emissions to counter climate change.

The removals, however, also underscored that regulators were working more closely together to avoid the types of uncertainties that undermine investors. (See link for more details: https://www.spglobal.com/platt...r-17th-bid-round-anp)

What are you Pi$$ed off about?

He will sell it to the Arabs. He is that good.

He will sell it to the Arabs. He is that good.

Prash thinking of all de chances he missed to get rich!

Join Now
shallyv replied:
Well , CP then? 21 subjects?.Guyana is now either.raising geniuses or those subjects are the old broken up into several parts!
GTAngler replied:
As an older person he should be setting the right example for the younger folks not spew hatred and bigotry.

shallyv replied:
What were PCE and CP and when were your days?
GTAngler replied:
Who or what am I evading? You? You are inferior to me. Not any challenge in any way. Now go play with your poop.

Django replied:
Bhai ,Shally probably in his 80's ,this place is past time for him .

Eight commissioners sworn in to have oversight of Local Govt. Organs
18 minutes ago