It’s been the most closely guarded secret in Ottawa: Who will be in the new Liberal cabinet?

Most people have been mum, but the Globe’s Daniel Leblanc has a few names: Chrystia Freeland and Bill Morneau of Toronto, Catherine McKenna of Ottawa, Jean-Yves Duclos of Quebec City and Marc Garneau and MÉlanie Joly of Montreal are all in, and would be newcomers to cabinet. Other Liberal stalwarts, such as Scott Brison, Ralph Goodale and StÉphane Dion are all expected to be in as well. Some high-profile recruits, such as retired lieutenant-general Andrew Leslie and former Toronto city councillor Adam Vaughan, are said to not be in cabinet.

THE SCHEDULE OF EVENTS TODAY

> 9 a.m. (all times local): Members of the public are invited to the grounds of Rideau Hall.

> 9:45 to 10 a.m.: Justin Trudeau and members of his cabinet arrive by foot. (Jane Taber has more on that for subscribers.)

> 10 a.m.: Mr. Trudeau and Sophie GrÉgoire-Trudeau meet with the Governor-General and Sharon Johnston.

> 10:30 a.m.: The swearing-in ceremony begins. Mr. Trudeau will take the oaths of allegiance, of office and of the members of the privy council, as administered by the Clerk of the Privy Council, Janice Charette.

> 11:30 a.m.: The ceremony ends with the singing of the national anthem.Shortly after, the official photo of the Governor-General and the full cabinet is taken.

> 1:30 p.m.: The new prime minister will participate in a Google Hangout with schoolchildren.

> Tom Mulcair gives his first public address since election night this afternoon at the NDP’s first caucus meeting of the new parliament.

> Canada is one of the highest spenders on pharmaceuticals in the world.

> The head of the residential schools commission is calling on Justin Trudeau to ask the Pope to apologize.

WHAT EVERYONE’S TALKING ABOUT

“For the first time in a decade, the other half of the B.C. Liberal coalition – the federal Liberal contingent – can enjoy a little sunshine. The Premier’s experience working for the ChrÉtien Liberals in Ottawa in the 1990s is a reminder of her dues paid. More recently, her communications chief, Ben Chin, worked on prime-minister-designate Justin Trudeau’s party leadership bid before he came to work for Ms. Clark. Senior envoys from Ms. Clark’s government have met with Mr. Trudeau’s top advisers to suss out the terms of the new relationship.” – Justine Hunter explains (for subscribers) how B.C. Premier Christy Clark will work with Justin Trudeau.

Jeffrey Simpson (Globe and Mail–subscribers): “It is proper to ask whether the former soldiers were given the help they required to deal with their traumas.”

Tim Harper (Toronto Star): “The cabinet unveiled Wednesday will be one of the deepest in talent in modern history.”

Laura Payton (Maclean’s): “Inextricably linked to this season’s cabinet speculation is debate over Trudeau’s pledge to have women fill half the ministerial roles. Here’s the thing: Cabinet is not a meritocracy.”

This newsletter is produced by Chris Hannay and Steve Proceviat. 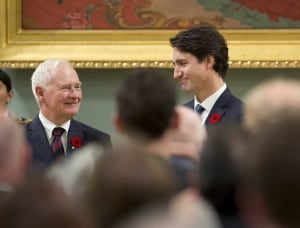 The full list of Prime Minister Justin Trudeau's new 31-member cabinet, in order of precedence, being sworn in today at Rideau Hall in Ottawa (with their province in parenthesis): 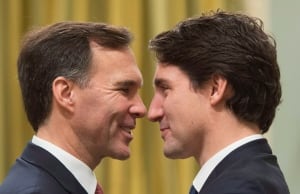 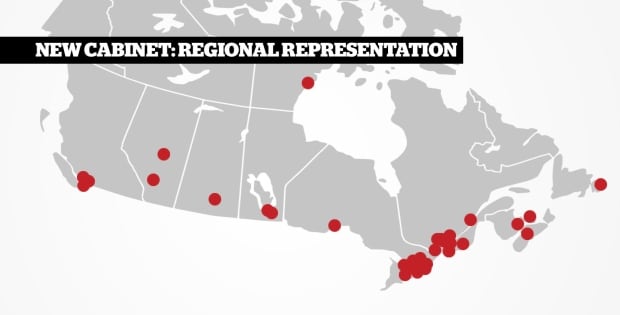 Map shows the regional distribution of ministers in the cabinet of Prime Minister Justin Trudeau. (CBC)

Trudeau sworn in as Canada's prime minister, three from B.C. named to cabinet

Sajjan and especially Wilson-Raybould will also play senior roles in Trudeau’s cabinet committee system, with both being named members of the Trudeau-chaired, 11-person committee on “agenda and results.”

The three British Columbians were sworn in Wednesday morning as they joined a 31-member cabinet that is made up of 15 women and, including Trudeau, 16 men.

In June, Trudeau promised that his cabinet “will have an equal number of men and women.”

Stephen Harper’s most recent 39-member cabinet included five British Columbians in junior and senior roles, or 12.8 per cent of the total membership.

Trudeau, in selected three B.C. newcomers to the federal cabinet, chose to take the route of picking fresh but relatively inexperienced young faces while limiting his B.C. representation to MPs in or close to Vancouver.

That means he could draw the ire of community leaders in municipalities like fast-growing Surrey.

However, Sajjan’s appointment will likely be viewed with some pride in Surrey’s large South Asian community.

Sajjan, a turbaned Sikh and former police detective, is portrayed by Liberals as a war hero after four overseas military deployments as an intelligence officer – including three in Afghanistan.

“I think Trudeau has shown remarkable courage” with those appointments, Rattan Mall, a B.C. Journalist with the Indo-Canadian Voice, told The Vancouver Sun in an email.

“He will be deeply admired by Sikhs and Indians all around the world.”

Wilson-Raybould’s appointment by Trudeau was particularly poignant, since her father Bill Wilson told Trudeau’s father Pierre at a 1983 constitutional conference that his daughter would like to some day be prime minister. (See Wilson's comment here at around the three minute, 30-second mark.)

Trudeau, despite winning 17 of B.C.’s 42 seats, was limited in choice due to the heavy concentration of Liberal MPs in Metro Vancouver.

Only Steve Fuhr, elected in Kelowna-Lake Country, won a seat in the B.C. interior, and the ruling party was shut out on Vancouver Island.

In a statement Trudeau gave a hint on the policy direction in several areas.

Trudeau promised action on climate change, building a “nation-to-nation relationship with Indigenous Peoples,” and the fulfillment of the government’s “sacred obligation” to Canadian veterans and their families.

“We are committed to both the security and safety of Canadians and the protection of their rights and freedoms,” he said.

“We will also reinvest in our cultural and creative industries and create an immigration system grounded in both compassion and economic opportunity.”

The three B.C. appointees will play key roles in the cabinet committee system, where many decisions are often made:

* Wilson-Raybould is vice-chair of the committee “on Canada in the world and public security,” which is chaired by Goodale. Sajjan, decorated for his intelligence-gathering successes during the Afghanistan conflict, is also on this committee. Both Wilson-Raybould and Sajjan are also on the sub-committee on Canada-U.S. Relations.

* Wilson-Raybould is vice-chair of the cabinet committee on intelligence and emergency management, which is chaired by Trudeau. Sajjan is also a member of the eight-MP committee.

* Qualtrough was named vice-chair of the committee on “open and transparent government.” Wilson-Raybould also sits on that committee.

* Qualtrough and Wilson-Raybould, the former B.C. Regional chief for the Assembly of First Nations, sit on the “diversity and inclusion” committee, chaired by McCallum.

Margaret Trudeau and her grandson Hadrien stand oputside Rideau Hall waiting for the swearing-in of her son Prime Minister-designate Justin Trudeau in Ottawa on Wednesday, Nov. 4, 2015.

Prime Minister-designate Justin Trudeau holds son Hadrien while his wife Sophie Gregoire-Trudeau holds daughter Ella-Grace and their oldest son Xavier walks alongside as they arrive at Rideau Hall with Trudeau's future cabinet to take part in a swearing-in ceremony in Ottawa on Tuesday, November 4, 2015.

Harjit Sajjan (Liberal/Vancouver South): The former Vancouver detective is also a decorated veteran in four operational deployments as a reserve army officer specializing in intelligence — three in Afghanistan and one in Bosnia.

Members of the public wait on the grounds of Rideau Hall before the swearing-in ceremony ofor Prime Minister-designate Justin Trudeau in Ottawa on Wednesday, Nov. 4, 2015.

Members of the public wait at the gates of Rideau Hall before the swearing-in ceremony of Prime Minister-designate Justin Trudeau in Ottawa on Wednesday, Nov. 4, 2015.

Jody Wilson-Raybould celebrates after winning the seat of Vancouver Granville.

Liberal candidate and MP-elect for Vancouver South, Harjit Sajjan is greeted by supporters upon arriving at their party headquarters in Vancouver, BC, October, 19, 2015. He is an 11-year veteran of the Vancouver Police Department and former Lieutenant-Colonel in the Canadian Armed Forces.

Indeed and a representative cabinet, Nehru.

Indeed and a representative cabinet, Nehru.

No Black in Trudeau's Cabinet. Not good. Indians are 3.86% of the population while Blacks make up 3%. 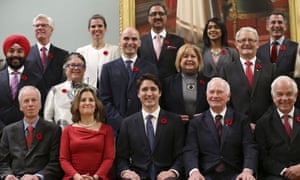 Good time for a one way ticket to Guyana?