The battle lines have been drawn as horseracing fans and turfites ‘chomp at the bit’ as they anticipate the exciting contests arranged for the Jumbo Jet Thoroughbred Committee first Triple Crown horseracing championships which will see over $20million in cash prizes up for grabs in the three-day event. 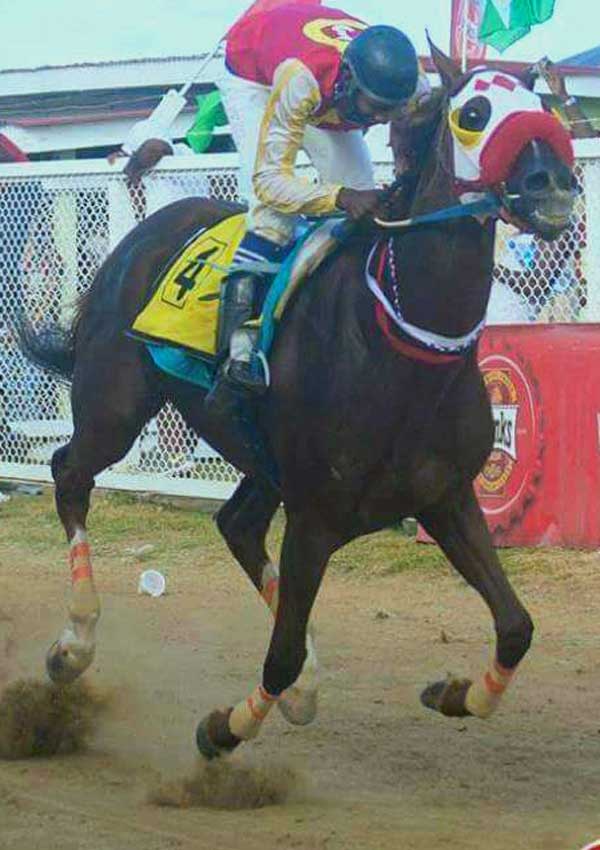 Most if not all of the country’s leading thoroughbreds will be in action and the excitement has been building to a crescendo.
Vera’s Finally a horse who hasn’t lost a race since she arrived in Guyana, being 2 for 2, is on the hunt to add the prestigious local Triple crown.  She is a Kentucky (USA) bred horse, owned by Jumbo Jet Racing Stable, trained by F. Habbibulla and ridden by jockey Colin Ross.
It is being said by some that she would not be able to complete the three wins for the Triple crown, while others are saying the opposite, she will storm to the crown.
Trainer Habbibulla did not say much of his charge, only to mention that Vera will speak for herself when the day comes on the racetrack.  He did also note that he has been in for pleasing surprises every day with improvements shown by the racehorse.
Vera’s Finally will have several challengers, one of them is Just call me boss, a Jamaican bred racehorse owned by Kris Jagdeo Racing Stable and trained by T. Jagdeo. This horse finished second twice to Vera’s Finally, but hopes to turn the tide and steal the triple crown event.
Trainer T. Jagdeo informed that his horse is at a 100% ready for these 3 events and he feels he can snatch the crown.  It is left to be seen.  Many of “Boss” fans are hoping that he will win the 3 events, due to him carrying less jockey weight than Vera’s Finally.  The reason for ‘Boss’ carrying less weight is due to him stepping up to Vera’s class which is a higher class.  The die has been cast and fans would not want to miss any of the three races.
There is the speedy Princess She’s not of the Sheriff Racing Stable, now returning to the track after a long rest.  She’s a Guyana Cup winner in 2016 at Port Mourant Turf Club. Honey Flow from the Karibee Rice Racing stable, who’s known for lots of speed, are two other horses being touted to upset Vera’s Finally and Just Call me Boss.
And the list of exciting contests continues to grow when you add Storm Bird versus It’s my choice.  These are two very fast horses that will take part in the co-feature. These two horses were stars in there two and three year olds races when they had just started racing.  Both are Trinidad bred horses and both are sired by the same father.  It’s been over a year since these two horses have run together and they are expected to light up the track.
Storm bird is owned by I. Bacchus and trained by F. Habbibulla, while It’s my choice is owned by Sham Chattergoon from the Jumbo Jet Racing Stable and trained by Ramroop.
The “Triple Crown” championship which is the first of its kind to grace the shores of Guyana will be competed on three separate race days at two different venues. The first race day is slated for this Sunday, February 18th at the Rising Sun Turf Club followed by the second race day at March 4th at the same Arima Park, West Coast Berbice, racetrack.
The third and final showdown will be on Easter Sunday at the Port Mourant Turf Club in Corentyne Berbice.
Both meets at the Rising Sun Turf Club will have the following 1st place cash prizes in the respective classes: C-Class and Lower – $1 million, F class and Lower/E- Class Non-earners/Last Start – $400,000, 3-year-old Guyana Bred – $350,000, H1 and Lower – $300,000, J/K & Lower – $240,000, K Class Non earner last start -$230,000 and L & Lower – $200,0000.
Meanwhile, the final leg in Corentyne will have the slightly bigger 1st prizes which are as follows: C-Class and Lower – $1.2 million, F class and Lower/E- Class Non-earners/Last Start – $500,000, 3-year-old Guyana Bred – $400,000, H1 and Lower – $350,000, J/K & Lower – $240,000, K Class Non earner last start -$200,000 and L & Lower – $150,0000.
There will be bonuses for any horse that win all three of their races in the Triple Crown event with a maximum bonus payout amounting to $500,000. According to the organisers of the event, horses will not be promoted nor demoted for any events in their classes as to give them the opportunity to win the bonus and to be hailed the “Triple Crown” champion in their class.
The three-leg championship will be competed under the rules of the Jumbo Jet Thoroughbred Racing Committee.
A raffle is also part of the activity with the winner of the main prize driving away with a 2011 Nissan Tida sedan car.  The other prizes on offer are a 125 motor cycle, Samsung 40″ Smart TV, 2-samsaung cell phones, a stove, microwave and a Refrigerator.
Raffle tickets are being sold throughout Guyana and can be purchased from Soesdyke Junction, Eccles at the Jumbo Jet Auto Sales location, 92 Smyth Street Georgetown at the Jumbo Jet location, Croal Street Georgetown at the BM Soat Auto Sales, Chester Fried Chicken in West Berbice and Bush Lot Village West Berbice at the two Jumbo Jet Auto Sales locations, Punai’s Pharamacy at Rose Hall Town, The Arabian Nights Sports Bar, #22 Village Hopetown West Berbice and the Discount Store on Regent Street.
Any information on the event including registration can be sourced by contacting:
Chandu Ramkissoon: 624-9063/608-9063/232-0633; Alan Podmore: 232-9115/ 619-1909 and Nikita Ross: 662-4668.

It is quite evident that there will be massive rigging. PNC will brush aside observers and do anything to stay in power. A third...
32 seconds ago

2020 will be the mother of all rigged elections. No wonder PNC already celebrating.
24 minutes ago

He had no other option because Granger pigheadedly insisted he will do nothing until Jagdeo goes through the motion of nominating the bitch.
27 minutes ago

After Granger insisted on doing nothing until Jagdeo ‘nominates’ that shameless bitch.
30 minutes ago

Fraud cannot be justified by stating that the opposition nominated her. I thought Jagdeo erred when he agreed to have her as GECOM chairman.
31 minutes ago

Eccles residents to vote in cow pasture
32 seconds ago

Reduction in private residences as polling places
27 minutes ago

Put somethings in order
2 hours ago

Trump heads to India, where massive rally and Taj Mahal visit await: What to know
3 hours ago