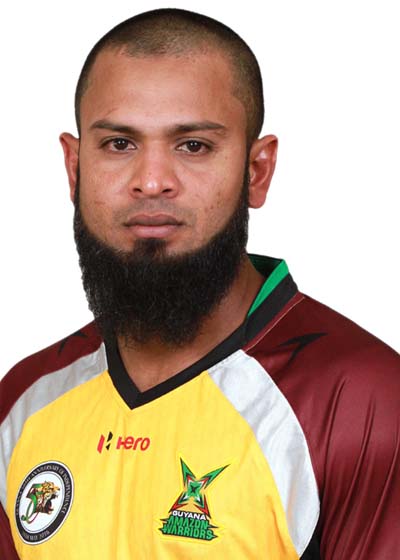 By Sean Devers
Assad Fudadin is focused on playing a meaningful role tonight in getting the Guyana Amazon Warriors one step closer to qualifying for the 2017 Hero CPL T20 Playoffs when they face the Tridents in Barbados.

Fudadin explained that could not accept the Cricket Guyana Inc (CGI) contract because he had signed to represent the Jamaica Franchise in the Reginald four-day First-Class tournament which starts on October 26 and the Regional Super50.
”My main focus right now is helping the Warriors to win our last two games to qualify for the playoffs in Trinidad. If you have a solid technique in Test cricket you don’t have to change that to be successful in the shorter version. What you need to change is your mindset and take a few more risks, find the gaps and face fewer dot balls,” Fudadin opined.
”Yes I have signed a contract to play for Jamaica and I will give a hundred percent effort on and off the field for my new team but I also wish the Jaguars all the best for the coming season” said Fudadin.
Fudadin is set to become the third Guyanese to play for a Jamaican Franchise following fellow Berbician Jonathon Foo and DCC Trevon Griffith who are members of the Jamaica Tallawahs which has already qualified for the CPL semi-finals.
Born in August 1985, Fudadin is one of 18 players from the Ancient County to play at the highest level and the 31 year-old became the only member of the Rose Hall Town Youth & Sports Club to play Test Cricket when he made his debut against England in Birmingham on June 7, 2012.
But after playing the last of his three Tests in August 2012, the solid left-hander has not played another Test match. After a good Regional season Fudadin was picked for the 2014/2015 Test series in South Africa but suffered an injury which ruled him out of that series.
”When I broke my finger while doing fielding drills on the morning of the first Test (Dec 17, 2014) in South Africa, I would have liked to play since I had a chance of doing well against world quality bowlers and secure a permanent place on the West Indies team” Fudadin reflected.
After being selected and not having the opportunity to perform due to injury, Fudadin was unfairly dropped for the next series despite the fact that he never failed in South Africa and that seems to still bother him.
”I would not say I am disappointed because I believe that everything happens for a reason and God is in control of what happens to everyone” Fudadin added. The experienced Fudadin has one Test Fifty and six centuries and 21 half-centuries from 86 First-Class matches since making his First-Class debut for West Indies ‘B’ against Kenya in 2004.
Fudadin was Guyana’s leading scorer in the 2010 Regional First-Class Tournament, which earned him selection on the West Indies A side which toured England in 2010 earning him a developmental contract from the WICB before scoring three consecutive fifties and a ton to help the Guyana Jaguars to their third consecutive First-Class title this year.
However, strangely, Fudadin was not selected for the Four-day matches on the West Indies ‘A’ team tour to Sri Lanka last September. “I aim to have a good season with Jamaica and get back into the West Indies team” informed Fudadin.
A lot has changed in the life of Fudadin since his entertaining 55 helped the West Indies beat Pakistan to win the 2000 Under-15 World Cup. Since then he has matured as an individual and cricketer, is married to Akeema and has an eight-year-old son. But most noticeable, he now sports a flowing beard which he says is for him to be physically identified as a Muslim.
But he was quick to add that while he wants people know he is a Muslim by his looks it is more important to show the character of someone who is very serious about his Islamic faith.
His new focus has not only affected his life in a positive way but also rubbed off on his cricket career. He began growing his beard in July of 2013 after returning from Bangladesh with the West Indies team the year before.

Sign In To Reply
Post
Manage Topic
Welcome to the Original Guyanese Discussion Forums, first established in 1996. Here you can discuss, ask questions or generally debate anything related to politics, movies, music, health or just gyaff away your day/night here. A note of warning, the Political forum is not for the faint of heart.  We do have some rules, so please adhere to them.
Join Now
Trinidad born rap­per Nic­ki Mi­naj makes donation to St Jude’s Home for Girls
Jamaica: Slain former Reggae Boy hailed
Jamaican security guard kills wife in Trinidad
Jamaica: Woman gets heart attack after being told house will be demolished
Jamaica: Vendors using obeah to get sales
Jamaica: 10 year-old boy found after running away from home for 20th time
Jamaican PM carefully weighs minister’s US Visa troubles
Lady Jags humbled by Mexico
Current Visitors: 148 (14 members, 134 guests)
bigger problems in the world
22 seconds ago

he inherited a growing economy....and decided to dismantle everything Obama did...now this
1 minute ago

An unethical, misogynistic, alleged rapist, racist, dim-witted, immoral one.
2 minutes ago
they are not in power...Trump is Obviously he is a poor excuse for a leader as he continues to blame others
3 minutes ago

How India has largely remained immune to coronavirus
22 seconds ago

US needs Obama back in charge as it faces a crisis!
1 minute ago

What's going on in India?
17 minutes ago

First Lady lays out path for reelection of President Granger- Granger turn DOCTOR days before election.
38 minutes ago
Dow down 800 points
42 minutes ago