Jagdeo pulls PPP from oil and gas consultations – Says, “We have already taken our position, we do not need to gaff”

Opposition Leader and leader of the People’s Progressive Party (PPP), Bharrat Jagdeo has indicated that his party will not honour any of the invites extended to it for consultations relating to oil and gas.

This is Jagdeo’s position even after he had been steadily saying that the PPP plans to treat oil and gas as apolitical. 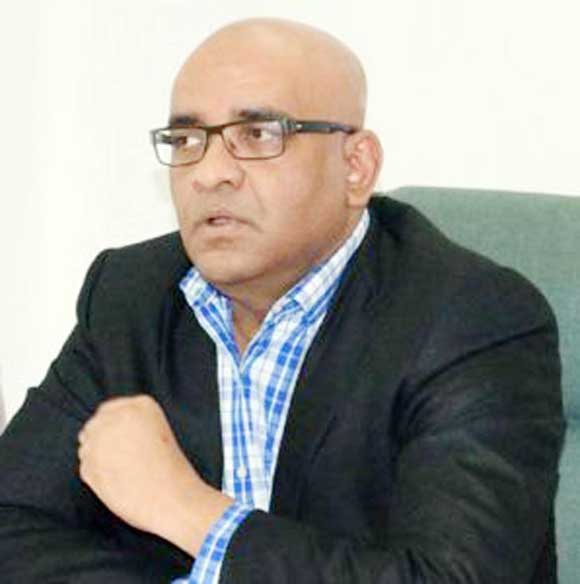 When Kaieteur News reminded of this stance and his commitment to help government make the right decisions to shape Guyana’s future as an oil and gas producing nation, Jagdeo said, “This is very different.”

Jagdeo said that the PPP’s position is known on other similar matters.
“We said remove the Minister’s involvement. We argued for a clear definition between the Energy Department and the petroleum commission. I do not need to go to a seminar to say this. We are trying to create a good institution, not go to another seminar to gaff; we have already taken our position,” said Jagdeo.

He said that the PPP’s position on Sovereign Wealth Fund is also known and documented.

Jagdeo said that such a design, as proposed in the Green Paper on the Fund, which Minister of Finance, Winston Jordan presented to the National Assembly, is recipe for too much political control, which will lead to disaster for Guyana.

“We know there will be too much political involvement so we will like to see a model that keeps this at arm’s length and we have defined what we would like to see and the principle.”

Jagdeo stressed that the powers that be are fully aware of the concerns of the Opposition.

He said that consultations such as the one organized by Conservation International is “just a road show”.

Jagdeo noted that the invitation for the consultation held last week was sent to PPP Members of Parliament by Conservation International. He said that this is “disrespectful”.

Glad you come to your senses and realize this. So when your PNC associates blame the PPP for the evils of the country, please let them know: Granger running things, not Jagdeo.  Thank you for enlightening us with your wisdom this early Thursday morning. How are you doing Prince?

Django said they are fine tuning the court's application.
1 minute ago

When do we expect?
1 minute ago

Rambarran demands over $52M rent for Ocean View...
3 minutes ago