Opposition Leader Bharrat Jagdeo says it’s a requirement that Guyana know the volume of oil and gas in every material discovery made offshore. He made this and other comments during a press conference at his Church Street office yesterday. 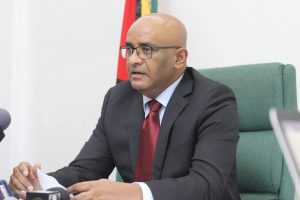 So far, ExxonMobil has made 15 finds on the Stabroek Block, but the public is in the dark about just how much oil and gas is in each discovery. ExxonMobil has said that there are over 6 billion oil-equivalent barrels in totality.
Apart from language that indicates there may be exceptionally significant bouts of natural gas in the Pluma and Haimara wells, Exxon’s public disclosures don’t quantify or disaggregate what’s in each discovery.
Kaieteur News has heard from Minister of Public Infrastructure David Patterson that the Liza phase one field is estimated to contain one trillion cubic feet of natural gas. He also indicates knowledge of the gas content in Liza phase two.
The Government, according to Jagdeo, is not competent or curious enough to demand those answers. That or they’re compromised, Jagdeo believes.
Exxon’s Government and Public Affairs Advisor, Janelle Persaud, told Kaieteur News since late last year that the company is still analyzing its finds. Kaieteur News has been informed that well logs will show that Exxon and its partners already know.
“[Government] wouldn’t even find out about it although it’s a requirement that you know. They’re not competent enough to ask for it and to start planning for the use of that,” said Jagdeo. He said that a People’s Progressive Party (PPP) government would ensure that it gets all the answers. The party is vying for re-election on March 2, after being unseated in the 2015 general election.
The former President explained that knowledge of the gas quantity, especially in Exxon’s discoveries, will furnish Guyana with what it needs to start healthy discourse on a series of matters.
“Is [the quantity] enough to have gas sector development, not just oil? What would be the cost of probably moving it?”
“What are the subsidiary industries? Is there adequate gas to come and build other types of industries? The downstream industries…”
Jagdeo said those are all the conversations that a Government should have already been having with its people.
“They never had it. You listen to the Ministers. They are very uninformed, not curious.”
“We made it clear [that], from the first week [of taking office], we have to start talking about where the pipeline would go. And not led by Exxon, but led by the Government of Guyana.”

Welcome to the Original Guyanese Discussion Forums, first established in 1996. Here you can discuss, ask questions or generally debate anything related to politics, movies, music, health or just gyaff away your day/night here. A note of warning, the Political forum is not for the faint of heart.  We do have some rules, so please adhere to them.
Join Now
Cuban immigrant shot dead on Middle St during robbery
Carter Center says elections preparations on track - -urges GECOM to ensure stakeholders aware of vote tabulation procedures
Former Barbados PM Arthur on Commonwealth observer team
Lawyer for Jamaican artiste Popcaan rejects claims he was found with gun
Trinidad woman awarded $40,000 after wrongful arrest for $100 traffic ticket
Trinidad: Cop shoots girlfriend who is also a cop over text message argument
‘City of Ogle’ mooted - -as sod turned for US$100m hotels project -cardiology centre, housing scheme planned
Economy grew by 4.7% last year – Jordan
Current Visitors: 113 (16 members, 97 guests)

HOMELESS Homeless People Are Without Toilets and Going in the Streets. We Asked the Mayor of LA Why By Joel Grover and Amy Corral •...
11 minutes ago

Sean, India built a Wall for your boy Trump
6 minutes ago

Ralph Ramkarran, A New & United Guyana.. will he make it to the finish line...
10 minutes ago