The Opposition is estimating that at least US$30M has been skimmed off in the Timehri airport project as a result of major modifications to the original designs. 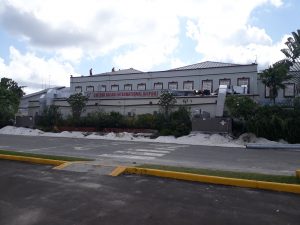 The statement was made yesterday by Opposition Leader, Bharrat Jagdeo, who was asked about the absence of an in-transit area for passengers at the facilities.
The in-transit area would have been critical as the entire justification for the airport expansion hinged on making the Cheddi Jagan International Airport (CJIA) a hub in the region with Africa and Europe flights being targeted.
However, the US$150M Chinese-funded and built project is missing a lot of things although it is nearing handing over time, since construction started in 2013. It was supposed to be finished in late 2015/early 2016.
Currently, in-transit passengers have to exit the planes and join the departure lines like everybody else without the presence of a special area as would have been expected and the norm at other large airports.
At least, according to observers, for US$150M and the fact 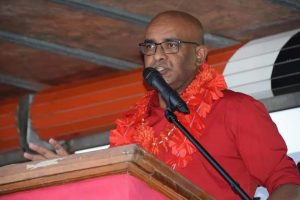 that the airport was supposed to serve as a hub, Guyana was supposed to see an in-transit area.
The modified designs have been a closely guarded secret by the Coalition Government despite pressure for it to be released.
Its release would shed light on a project which is the biggest ongoing infrastructural project in Guyana but which progress and birth have been marred by one scandal after the next.
Throughout it all, the Chinese contractor, China Harbour Engineering Company, and the supervisors, CEMCO and MMM Group, have all largely been silent despite the criticisms.
In fact, yesterday, Jagdeo, during his weekly press conference, made it clear that answers will have to come from the Minister of Public Infrastructure, David Patterson, who has ministerial responsibilities for the project.
The project has been generating troubles for both the Coalition Government and the Opposition since announced in late 2011 with delays, inflated prices and major modifications made with little answers for the hard questions 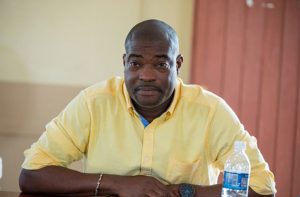 that were triggered as a result.
The project included the extension of the runway and the building of a new terminal building. It did not include a parking lot. It did include the large apron for eight large planes and eight passenger bridges.
According to Jagdeo, the press should be upping the pressure for the modified designs to be released by Patterson.
“Why is there a secret? If there is such corruption, you tell us what you found that was corrupt and how you modified it to fix the corruption?”
Jagdeo was never keen to release any contract during his tenure. He always spoke of confidentiality clause
Instead of a new terminal building, the old one has been gutted and renovated and a small structure built to accommodate the arriving passengers.
The eight bridges have been reduced to four.
According to Jagdeo, in the original plans there was space for offices. There were reports later that the coalition government went to tender for contractors to build the offices.
The Opposition Leader said that a probe into the project is a high priority for his party when it returns to office. Elections are coming up, he said.
“Everything we put in, they reduced.”
He said that it is his belief that the current project is US$30M less than what was charged.
The Coalition Government had said that reduced the scope of the project after finding in 2015, on entering office that almost US$90M in claims and payments to CHEC were on file despite just 15 percent of the work done.
They said that no studies were done by CHEC and that the PPP government under Jagdeo unilaterally awarded the design and build contract without going to tender.
CHEC was forced to abandon works on the north side of the runway after encountering a swampy area.

Skimming on large projects is what corrupt government does. It is why the take these large loans from the Chinese knowing fully well it creates indebtedness with little opportunity to recoup cost. The Chinese knows this as well. It is their way of owning other nations. Look at Africans for example. Some of them are de facto Chinese run. I would never take a lone from the Chinese government for even developing an out house.

The Chinese government is very shrewd in their transactions and has to be scrutinized very carefully. We buy a lot from China and almost everyday, the suppliers either change their names or banking information.

The PNC are ALL THIEVES! And they are barefaced, shameless, in your face thieves!! A rotten BUNCH of incompetent HOOLIGANS!!!

Banna you have to be blind not to see the Banna

The banna is as big as a bus. How come you can't see him?

We ensure all money we borrow is spent properly.  It’s not easy to get everything right but most are working.  We don’t take everything anyone offer. The Chinese offer for a new bridge was not taken.

The guyanese people support the government path to developing the country.  This will show in the election .

We don't borrow money from the Chinese. They give you credit against the project, which has to be done by Chinese workers and companies. The only money the Chinese physically part with is bribes. If Jagdeo says that U$30million was skimmed, then that would have been given to the original team who signed the contract. That would be the PPP.

Where is the Donkey Clive Thomas now, OH is PNC so he not going to call them in!!  Bloody ass kissers and Batty washers!!!

Do your research, it was release.

We don't borrow money from the Chinese. They give you credit against the project, which has to be done by Chinese workers and companies. The only money the Chinese physically part with is bribes. If Jagdeo says that U$30million was skimmed, then that would have been given to the original team who signed the contract. That would be the PPP.

Corruption today has reached heights never imagined in Guyana. The list of blatant corrupt transactions since May 2015 has disappointed, nauseated and shocked people today. One transaction that has people talking and that has come to be synonymous with rampant corruption is Guyana’s largest single infrastructure project – the US$150 million Cheddi Jagan International Airport. Instead of people being joyous and proud over a spanking new modern airport, they are angry and disgusted over the mismanagement and corruption that have scarred the CJIA project. The CJIA project has become one more of the dozens of A Partnership for National Unity/Alliance For Change (APNU/AFC) ugly corruption scars on Guyana’s otherwise beautiful landscape.
The revelation this week that the project included a cost of US$35 million (more than G$7 billion) for sand used in the project, including for the runway, has shocked even the most ardent supporters of APNU/AFC. Independent analysts have estimated the real cost for sand for such a project should not exceed US$5 million. This means the cost was inflated by more than seven times the real cost. As unbelievable as this cost for sand is, there are other worrisome information that now has become part of the knowledge-base for Guyanese. In 2014, the project suffered a dramatic setback when APNU and AFC blocked the project in Parliament because, among other objections, was that the US$150 million budget was too excessive for the project that was designed. That project included an extended runway to accommodate bigger planes and new terminals with eight arrival and departure air bridges.

Ow Dave, leh he feel nice bah the Limey admitted him by error. An dvance Country lik England NOW has a scavenger

T must be smoking some real crazy shit up there in England.

Kascz, 4 years Clive Thomas aint find a Penny BUT collecting millions as Salary. Only in a PNC Guyana.

Do your research, it was release.

You do know the 150M contract PPP signed, your buddies @APNU reduces the size by almost half for the same value... don’t you think something is wrong.

No, he thinks that is the greatest thing ever happened since slice bread

Kascz, 4 years Clive Thomas aint find a Penny BUT collecting millions as Salary. Only in a PNC Guyana.

Thomas is as idiotic as he is ugly.

The fact is that the dirtbag pnc/afc modified the contract and now are totally accountable for all short comings even as they try to dwab their shyte in ppp ass.

Sign In To Reply
Post
Current Visitors: 155 (1 member, 154 guests)
Welcome to the Original Guyanese Discussion Forums, first established in 1996. Here you can discuss, ask questions or generally debate anything related to politics, movies, music, health or just gyaff away your day/night here. A note of warning, the Political forum is not for the faint of heart.  We do have some rules, so please adhere to them .
Do not post any messages that are obscene, vulgar, sexually-orientated, racist, hateful, threatening, or that otherwise violate any laws. Do not post any messages that harass, insult (name calling), belittle, threaten or mock other members.

Ramakant-P replied:
OK!
Athena replied:
Na, you're the starboy. Just do your thing, don't bother with them.
Ramakant-P replied:
Nehrubhai, What is the name of that PPP MP who beat up two afro Police officers?
Ramakant-P replied:
What about its technology? Is it the same machinery but a different name? The price would depend on the cheap steel they used from China.
10 major international investors signal interest in sugar
2 hours ago

What model of tractors GUYSUCO buying for G$33 Million each.
3 hours ago