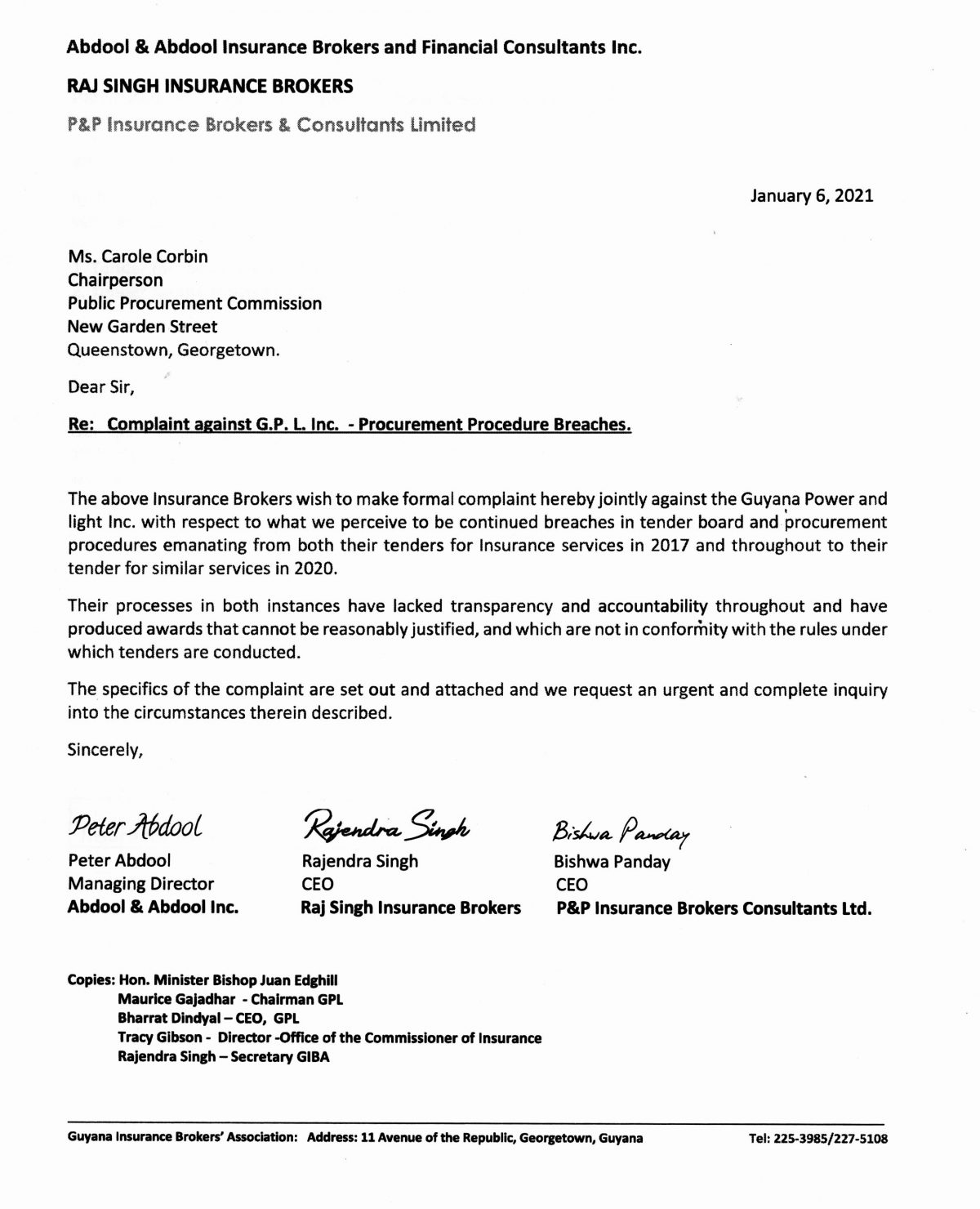 Three local insurance companies are accusing the Guyana Power and Light (GPL) of possibly violating public procurement procedures in relation to its 2021 Tender for the provision of Insurance Service for Generation and Other Equipment (GPL-PD-015-2021).

According to a letter to Minister of Public Works Juan Edghill from the Guyana Insurance Brokers Association (GIBA), its members are deeply concerned and alarmed by the conduct of GPL  which they believe skews the present tender process in favour of the current insurance holder. They also contend that this broker was granted the contract in 2017 despite “provable breaches in the tender requirements and manipulation of the process.”

The letter dated February 16, 2021 which was seen by Sunday Stabroek, follows a January 6, 2021 complaint to the Public Procurement Commission (PPC). The life of the Commission has since expired.

The GIBA have noted that “after numerous manipulations” the 2020 tender process was aborted with a promise that the 2021 tender would commence early enough for all brokers to participate.

Following months of lobbying beginning in November 2020 the tender document was posted on GPL’s website on February 10th 2021 but before all interested brokers could register the tender had been removed from the website and is no longer accessible.

They stressed in the letter that transparency and fair play are sadly lacking in the situation and since the existing coverage expires on March 31, 2021 they are concerned that there will be a repetition of 2020 which means the current broker who appears to be the “preferred broker” will benefit from a renewed contract. GPL is expected to claim that there is “insufficient time for the tender”.

GIBA contents that even if the tender were to be reissued somewhere closer to the expiry date competing brokers would have insufficient time to approach their market and be placed at a disadvantage as the controlled platform will be heavily skewed.

“This Association continues to raise alarms with respect to the perception of corruption and nepotism that seems to surround insurance tenders for public corporations and the perception that the result is an undermining of the tender process to the detriment of those public corporations, particularly, as we are aware that His Excellency, the President has indicated that the insurances for all government entities must be correctly and properly tendered”, the letter to Edghill said.

The letter was copied to President Irfaan Ali, Vice President Bharrat Jagdeo, Minister with responsibility for Finance Dr Ashni Singh and the Chairman of the board of GPL, Maurice Gajadhar.

The original complaint is based on the 2017 tender for the provision of insurance services for Generation and other Equipment.

According to the complaint filed with the PPC by Abdool and Abdool Inc, P&P Insurance Brokers and Raj Singh Insurance Brokers, bids were submitted on February 17 at 14:00 hours and opened at 14:30 hours.

The requirement according to the bid documents was specifically for “all risk” coverage and not “fire and special perils”. Other requirements include that the end costs to GPL be present in full with no hidden costs; that brokers supply qualitative as well as quantitative information and that insurers and or reinsurers involved be rated by AM Best or Standards and Poors at minimum specified level with evaluation points proportionally awarded for these ratings.

Additionally the Insurance Act of 1998 required that a local insurer act as a “Fronting Company” for any foreign insurer not registered in Guyana who wished to do business here. A further requirement was for a specific premium tax to be levied on premium exported by the fronting company as a specific percentage of the premium payable to the Guyana Revenue Authority.

The companies which have a combined total of 90 years’ experience in the insurance industry have contended that the prices offered in the winning bid are not market rate.

In fact they contend that they have been unable to find any market internationally which would’ve accepted and “All Risk” cover placement of US$2.19 per US$1,000 Value.

According to the companies the average “All Risk” insurance coverage for each US$1,000 of property value lies between $5 and $7 dollars.

“Provided that all the requirements of the tender documents are met…the reduced average rate per thousand worldwide is $3.68 while the risk at which the broker proposed to place is $2.19 per thousand…this rate is available nowhere that we are aware of in the world,” they said.

cain replied:
Oi Shally, next time yo other side posting for you, must leh me know, I gonna lay down some wicked cuss pon e rass....an' dot's no joke.

Totaram replied:
They can't even speak with one voice on this matter. What a bunch of jokers. This PPP government is an embarrassment.
Django replied:
Edghill says bodies boat found by Nicaragua likely the same one seen in Guyana’s waters March 4 ,2020 www.stabroeknews.com Minister of...

The First Death Anniversary of a true hero.
27 seconds ago