A number of workers at the Uitvlugt factory yesterday downed their working equipment due to growing frustrations about the factory’s inefficient functioning. This was announced by the Guyana Agricultural and General Workers Union (GAWU) in a press release. The workers, according to the release, are represented by both the GAWU and the National Association for Agricultural Commercial and Industrial Employees (NAACIE). It was revealed that for several weeks the workers have been actively airing their concerns to the estate’s senior management, however, no intervention occurred. 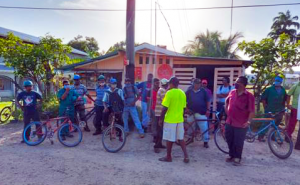 Some of the protesting workers.

GAWU stated that the workers lamented that mud-caked cane was being delivered to the factory which is a major inconvenience for them. In past times, a washing system would have been implemented to remove the significant amount of mud from the cane but even this became ineffective, according to GAWU.
The union also highlighted other issues occurring at the factory which includes several severe defects. The workers, it was noted, would have given a warning earlier this year about no spare parts being procured by the Uitvlugt factory and that worn out components were being lubricated and later reinstalled – all during the mid-year-out-of-crop period. Following this warning, the matter was addressed to several senior managers but again nothing was done.
GAWU further stated, “The lethargic attitude of some managers is very upsetting to the workers. They pointed out that some difficulties experienced last Saturday evening (September 12) were not resolved until the next morning. They shared that though they sought the assistance of a senior factory personnel, that individual, who resides in the estate compound, only showed up the next morning. That individual’s inaction allowed the issue to persist for several hours to the detriment of the estate.”
GAWU claimed too that the Uitvlugt factory has lost 168 hours of work due to breakdown, which is more than a week’s operations. The factory is said to be in its fifth week of operation currently.
GAWU said that it has, for some time now, been highlighting the declining performance of the industry’s factories though there were concerted attempts, in recent times, to boost the Guyana Sugar Corporation’s factory operations department. “It was felt that at least some improvement would have been seen by those who were held out as being most capable, this alas was not the case. And, it is the industry and by extension the workers who continue to suffer,” GAWU added.
Arising from the workers protest yesterday, a meeting is scheduled between representatives from GAWU and NAACIE and the estate’s management to iron out the difficulties which contributed to the protest action. “We are assured that the Corporation has taken the workers concerns seriously and will seek to get to the bottom of the issues. We believe it is through the collaborative efforts of the workers and their organisations and the management that solutions can be found and progress can be had,” GAWU noted.
Recognizing government’s efforts to appoint a new Board and Chief Executive Officer (CEO), GAWU underscored that the Board “which will include a representative from our Union, has its work cut out for it as it seeks to solve many of the problems which plague the industry.”
As it congratulated the recent appointments, GAWU said that it is hopeful that “we can soon engage the new CEO on several matters of concern to the Union and workers.”

That's the problem the new CEO has to face. Gawu's leader is testing the CEO. He just can't wait for Guysuko to implement their plans to revive the sugar industry. During the last 5 years, he kept his mouth shut because he was afraid of the PNC cabals.

Totaram replied:
You are growing chupider by the day.
Brazen supporters !!!!
30 minutes ago