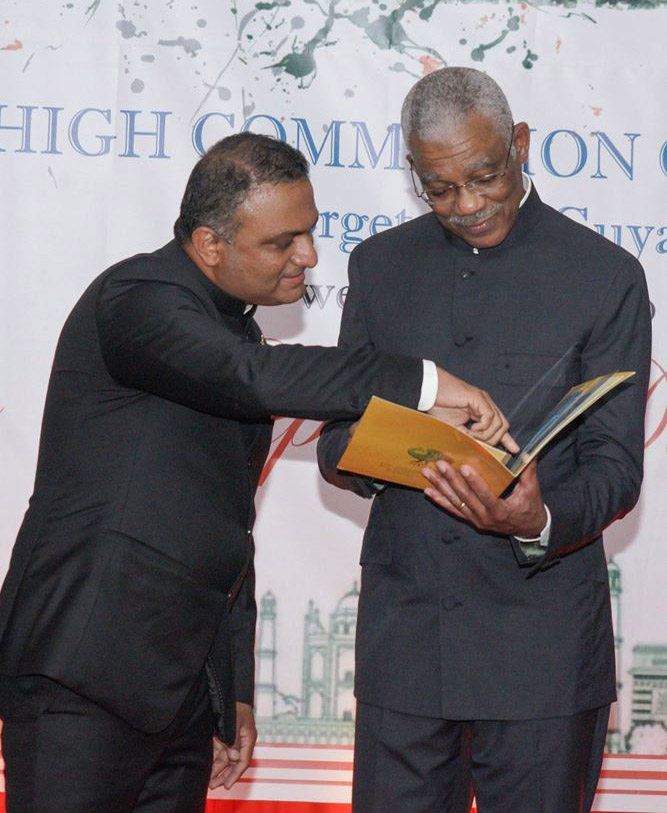 President David Granger (right) and Indian High Commissioner to Guyana Dr. KJ Srinivasa browse commemorative stamps issued by the Government of India on the occasion of the 550th birth anniversary of Guru Nanak Devji. The stamps were presented to President Granger on Sunday evening at the reception. (Ministry of the Presidency photo)

The petroleum sector is one of a number of areas that  India sees huge potential for cooperation with Guyana.

In his remarks, Srinivasa said “Though business and trade is happening to a certain extent, we see huge potential in the economic side and the existing huge gap can be filled with more and more business activities by businessmen from both sides. The High Commission interacts regularly and closely with the Guyanese Government, Private Sector, Businesses, etc. and looks forward to further intensifying the level of these interactions.  Huge potential exists in Guyana in manufacturing, power generation, small and medium enterprises, agriculture, agro/food processing, eco-tourism, renewable energy, and last but not least in the petroleum sector – both upstream and downstream sectors…”

The High Commissioner also set out the nature of the development co-operation that New Delhi was seeking with Guyana and said that any initiative that contributed further to a country’s indebtedness could not be viewed as development diplomacy.

“Any initiative that contributes to further indebtedness cannot be part of `development diplomacy’. And any initiative that seeks to impose conditionalities cannot come under the rubric of `development diplomacy’. Our assistance to a friendly country is with no strings attached.  Our support is based on the traditional belief of an elder brother helping a younger brother to make him strong and self-sufficient, self-reliant. Sustain-ability is the touchstone for development cooperation …”, the High Commissioner added.

China has come under increasing international criticism for a development model which critics say tends to expand the indebtedness of developing countries.

Srinivasa said that India’s Prime Minister Narendra Modi’s vision is for the development partnership to be guided by the partner’s priorities and on terms that will be reasonable and comfortable for the partners. This relationship also envisions building local capacity and creating local opportunities, he said.

Noting that India hopes to have a US$5 trillion economy by 2025, Srinivasa said Guyana’s economic growth has also caught the attention of New Delhi and its entrepreneurs. He said that the public and private sectors have shown active interest in partnering with Guy-ana’s growth story. In addition to petroleum, he cited sugar, coconuts and rice.

The High Commissioner  also laid out key projects that are being worked on here under the Indian Development and Econo-mic Assistance Scheme (IDEAS).  These projects include East Bank Deme-rara East Coast Demerara Link Road project under a Line of Credit of US$50 million; provision of an ocean going ferry with a grant of US$8 million and a Line of Credit (LoC) of US$10 million for use in the North West; upgrading of three regional hospitals at West Demerara, Suddie and Bartica with an LoC of US$17.5 million; supply of fixed and mobile pumps with a US$4 million LoC and supply of a pilot scale rice husk gasifier.

He also adverted to the Centre of Excellence in Information Technology in Georgetown and said that the total value of the on-going projects is US$81.5 million (Line of Credit) and US$9 million (grant funding).

The High Commissioner also pointed out that while meeting CARICOM leaders on 25th September 2019 on the sidelines of the UN General Assembly in New York, Modi had announced grant assistance to the tune of US$14 million for quick impact community development projects in CARICOM countries and a US$150 million Line of Credit (LoC) for CARICOM countries for solar energy and climate change related projects.

0n his remarks at the ceremony, President Granger applauded India’s leadership in promoting solar energy and technology to bring prosperity and energy security to the peoples of solar-rich countries. He cited its role in the establishment of the International Solar Alliance (ISA).

“Guyana is moving towards the establishment of a ‘Green’ State which will place more emphasis on the protection of our environment, the preservation of our biodiversity, the promotion of the use of renewable energy, including through the generation of solar energy and the adoption of practical measures to ensure climate adaptation.

“I am happy to note Guyana’s partnership with and participation in the ISA which will contribute to the advancement of our Green State Development Strategy. This partnership moves Guyana closer to achieving its objective of becoming a ‘Green’ State”, the President said.

India has a lot to offer Guyana. I believe they can be more instrumental than China. The can partner up with locals and make Guyana the food hub of the region.

Granger said he still don’t know why the PPP chose the Chinese over them for the sugar factory. India was a better partner in that venture.

China does not know sugar. India is in the Brazilian sugar export business.

PPP and PNC both love the Chinese blush.

Sign In To Reply
Post
Current Visitors: 112 (13 members, 99 guests)
Welcome to the Original Guyanese Discussion Forums, first established in 1996. Here you can discuss, ask questions or generally debate anything related to politics, movies, music, health or just gyaff away your day/night here. A note of warning, the Political forum is not for the faint of heart.  We do have some rules, so please adhere to them.
Privacy Statement - Rules
Join Now
Yuh really wutliss.
10 minutes ago

jango, u know how Dave is, very passionate and somewhat emotional in what he does. U said his release is coming soon. when is that?
11 minutes ago

If you nah gat onion and garlic, how you mek cocnut choka bhai? Chew and swallow at you own risk of choking.
12 minutes ago

Nothing wrong with coconut choka. had some last nite.
16 minutes ago

World Bank EXCLUDES Guyana again from COVID-19 $$$$
12 minutes ago
All COVID-19 test results go straight to Volda Lawrence from the lab--- WHY! WHY! WHO IS SHE??
34 minutes ago
Burnhamite’ faction has taken control of PNCR and will fight to stay on in power – Jerome Khan
2 hours ago
Not a Sermon only a Thought
2 hours ago