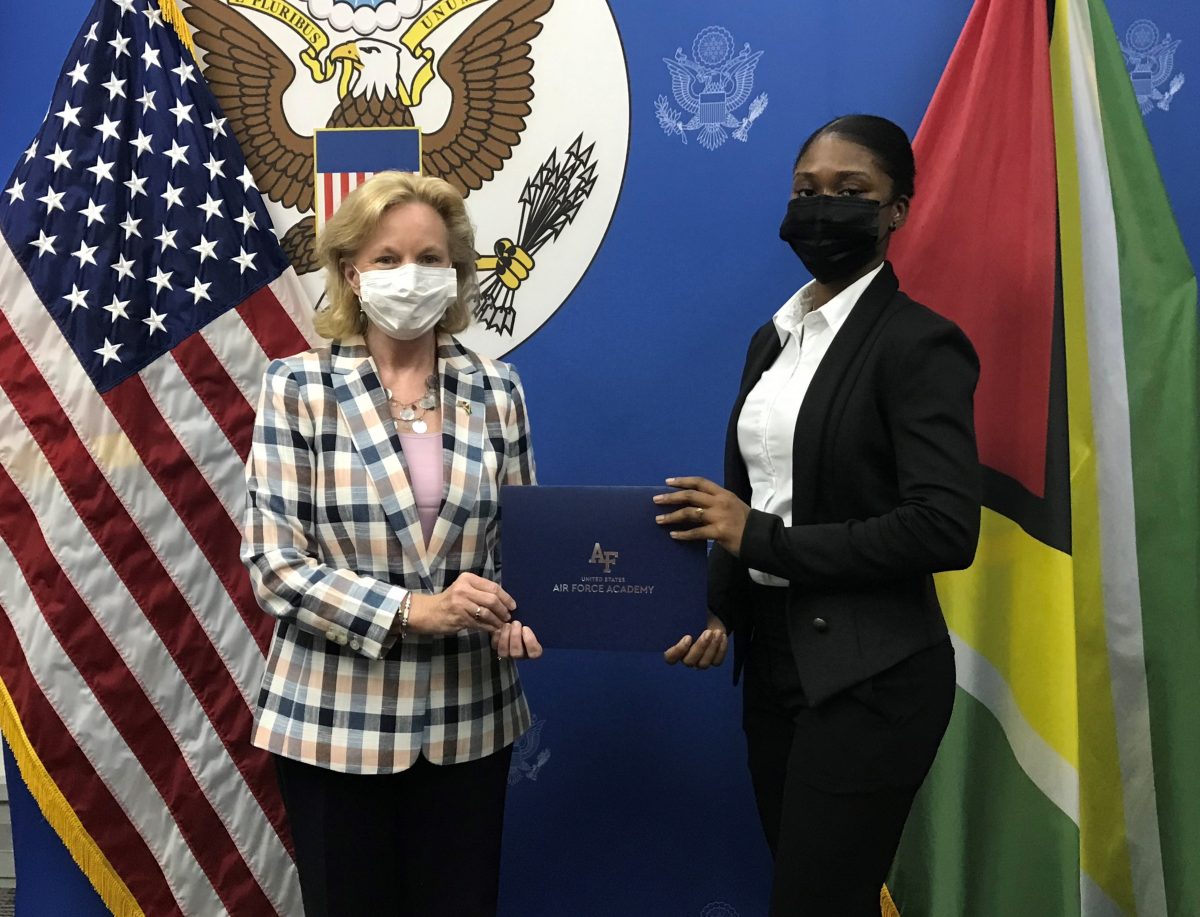 US Ambassador to Guyana Sarah-Ann Lynch has congratulated Emmanuela Desir of Georgetown as the first female from Guyana to attend the US Air Force Academy in Colorado Springs, Colorado.

She attended a pre departure ceremony at the US Embassy, which included representatives from the Military Liaison Office, a release from the US Embassy said today.  Desir will receive a full four-year scholarship to the Academy, sponsored by the U.S. Government. Only 15 international students per year are admitted to the academy from around the world, the release added.

“This scholarship builds on the U.S. commitment to women, peace and security, as we recognize the unique and necessary skills that women bring to the security forces.  The United States knows that when we invest in a woman, she changes not only her own life, but also that of her family and community.  Add that change in a key institution, such as the military, and she will change that institution and her country”, the release said.

Lynch praised  Desir's strong desire to serve her country in the area of science and noted her plans to return to Guyana to work in the field of green energy.

Congratulations to the young lady on her achievement. Hope she is able to bring changes to Guyana.

Yeah! Make us proud! Become an ace pilate and shoot down all of the Venezuela Air Force! With your mouth, if necessary! But congratulations, anyway!

She has a familiar last name.  Congratulations.

Sign In To Reply
Post
Current Visitors: 131 (3 members, 128 guests)
Welcome to the Original Guyanese Discussion Forums, first established in 1996. Here you can discuss, ask questions or generally debate anything related to politics, movies, music, health or just gyaff away your day/night here. A note of warning, the Political forum is not for the faint of heart.  We do have some rules, so please adhere to them .
Do not post any messages that are obscene, vulgar, sexually-orientated, racist, hateful, threatening, or that otherwise violate any laws. Do not post any messages that harass, insult (name calling), belittle, threaten or mock other members.
Do not use profanity, racial, ethnic, religious, or other slurs and stereotypes, or post sexually-oriented material, masturbatory and excretory references, or any other offensive material.

No quorum for crucial GECOM meeting
40 minutes ago

LISTEN! Real Low
3 hours ago
Exposing the PPP's Hypocrisy and Opportunism in relation to Walter Rodney
3 hours ago