Upon the request of the Minister of Finance, Winston Jordan, the International Monetary Fund (IMF) was invited last year to advise on what reforms would be needed for the fiscal regime of the petroleum sector. 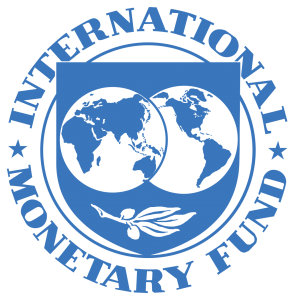 Following this, the IMF visiting team provided a number of recommendations, a key one being that a reasonable, minimum share for the government should be between 15 and 20 percent.
The international organisation which aims to promote global economic growth and financial stability said that Guyana can achieve a 15 to 20 percent take from a combination of royalty and a monthly limit on cost recovery (with excess costs carried forward).
Given the terms of the Guyana-ExxonMobil contract, the cost recovery limit is 75 percent. This means that the contractor is allowed to recover 75 percent of his expenses from annual oil production earnings. The 25 percent that remains is called profit oil. According to the agreement, this shall be shared 50/50.
Guyana therefore receives of 12.5 percent of the total production. When the two percent royalty is added, Government gets 14.5 percent of the production. The Fund has therefore recommended that going forward, Guyana should increase its take.
Energy Department Head, Dr. Mark Bynoe, has said on several occasions that he is desirous of increasing the Government’s take from its oil resources. Not only does he want an increased royalty for future contracts, but more profit oil too.
HIGHER ROYALTY
In the eyes of Fitch Solutions, an industry-leading provider of macro intelligence data, Guyana’s two percent royalty in the ExxonMobil deal for the Stabroek Block is quite low especially when it is compared to other countries in the region like Brazil and Mexico.
The industry analyst noted that for the two nations identified, the minimum base royalty rate for deepwater acreage is 10% and 7.5%.
In fact, the company believes that even a doubling of the current rate will not discourage oil producers, especially after the recent oil discoveries.
At present, Guyana’s arrangement with ExxonMobil sees the country receiving a mere two percent royalty and 50 percent of the profit oil from the Stabroek Block. Importantly, Guyana has agreed to pay Exxon’s taxes out of its share of the profit oil. This simply means that Guyana is accepting way less than 50 percent of the profit oil.
And while there have been numerous calls for Guyana to get a fair deal, ExxonMobil has remained adamant about not returning to the table for the renegotiation of these and other terms.

Oil companies would prefer it if the data they have accumulated on areas they have studied are kept secret, even after those areas ceases being theirs to operate. That’s because the revelation of that data to other oil companies and the general public could lead to billions of dollars in signing bonuses for Guyana, particularly for parts of the Stabroek Block. 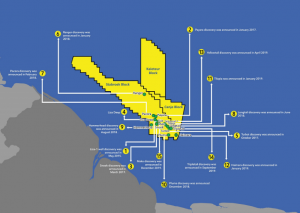 Map showing blocks in which ExxonMobil owns stakes. The company’s 15 material discoveries have so far been concentrated in the southern end of the Block

This was told to Kaieteur News in discussions with several industry experts.
ExxonMobil is slated to relinquish 20 percent of the behemoth 6.6 million-acre Block on October 7, 2020. The Production Sharing Agreement (PSA) it signed with Government in 2016 requires such a relinquishment after the first renewal period, which is four years.
It is typical for data to be kept confidential when a contract covers the concerned area. But after the relinquishment clause of the PSA is fulfilled, 1.3 million acres of the current contract area will no longer be covered by the agreement.
That acreage could form several new blocks. And the data that concerns it will be the sole property of the State.
At this point, many oil companies will fork up attractive offers for the rights to the relinquished areas. The area that is now the Stabroek Block has been proven to contain billions in high quality oil-equivalent barrels.
Government’s opportunity to get more value for the people doesn’t end there.
It is likely that ExxonMobil has already studied the data to determine which Blocks it intends to farm into in the future. Government can do whatever it wants with the data ExxonMobil will relinquish, including publishing it.
If it does that, other oil companies can study it and determine which parts of the relinquished area are more attractive and likely to contain commercial reserves than others.
All that does is give some of ExxonMobil’s competitive advantage to other companies, and makes it easier for Guyana to rake in billions of dollars.
When pressed about the meager US$18M signing bonus it collected for handing over Stabroek Block rights to ExxonMobil, one of Government’s justifications was that it didn’t know just how much value was there.
This time around, Kaieteur News would have already pointed out how other nations were able to collect large sums for acreage that was less valuable.
Stabroek Block acreage isn’t the only acreage that relinquishment concerns. ExxonMobil has already relinquished 20 percent of the Canje Block. Others are to be relinquished in the coming years.
Guyana’s future opportunities are vast.

Going forward they are in a better position. Also, gas will be a big winner!

When pressed about the meager US$18M signing bonus it collected for handing over Stabroek Block rights to ExxonMobil, one of Government’s justifications was that it didn’t know just how much value was there.

This reflects inexperienced and incompetence. They should have built in escalation clauses.  Faced with the unknown, you always leave wiggle room.  This is standard.

They should take Lilmohan advice and seek a good faith solution with Exxon.