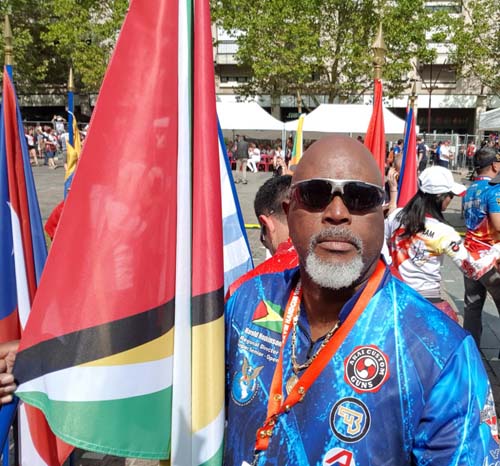 Harold ‘Top Gun’ Hopkinson aka ‘Hoppy’ has become the first Guyana to compete at the International Practical Shooting Confederation (IPSC) World Shoot which is currently underway in France.

Hopkinson, who is the Regional Director of IPSC (Guyana) which falls under the Guyana National Rifle Shooting Association, has been very active this year attending a number of IPSC sanctioned shoots, he recently returned from competing in Grenada where he excelled.

Some 1600 competitors from 140 countries including fellow Caribbean nations, Barbados and Jamaica are competing in France. Hopkinson attended the IPSC General Assembly which was held on Saturday last where members elected a new President, Russian Vitaly Kryuchin who was one of three candidates contesting for the post.

Hopkinson informed that he would be shooting in the Super Senior category in the Open Division, the F1 of practical shooting sports. He noted that his new gun, a Akai Custom Gun, made by Shay Horowitz of Miami, is making a power factor of 176, 16 over the needed 160.

”This custom made pistol can shoot both IPSC and USPSA. Going up against 1600 participants is going to be fun and I will try to enjoy the competition whilst eyeing glory for Guyana. I would like to express gratitude to the Commissioners of Police, Mr. Seelall Persaud as well as Assistant Commissioner Mr. David Ramnarine and Commissioner General of the Guyana Revenue Authority, Mr. Godfrey Statia for their collective assistance.”

Welcome to the Original Guyanese Discussion Forums, first established in 1996. Here you can discuss, ask questions or generally debate anything related to politics, movies, music, health or just gyaff away your day/night here. A note of warning, the Political forum is not for the faint of heart.  We do have some rules, so please adhere to them.
Privacy Statement - Rules
Join Now
They are trying to get their mobs to get out and riot before a declaration is made. You know the history of the PNC and their modus ...
18 seconds ago

What is the intention and or interpretation of this picture on the front page of Guyana National News Paper.
2 minutes ago

Prove it.
2 minutes ago

Thanks KP, see my post on the official thread.
3 minutes ago

I don't want to think that non-whites are incapable of doing what the Reds can do. I've seen so many non-whites in the USA who have...
3 minutes ago

GECOM Chair wrote this letter to the Commissioner of Police.
18 seconds ago