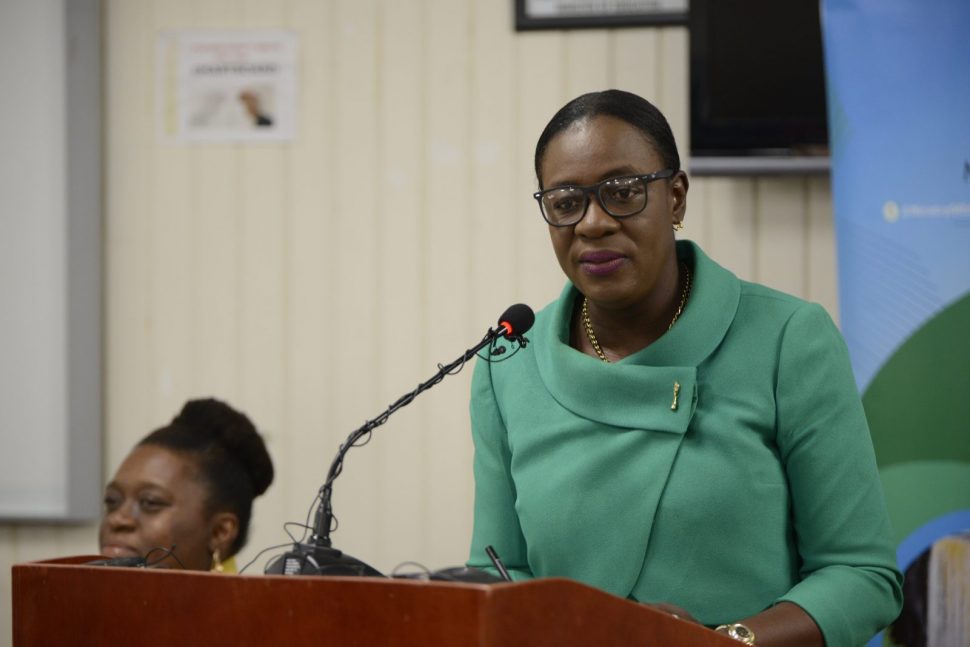 Congratulations to all parents and students who were successful. 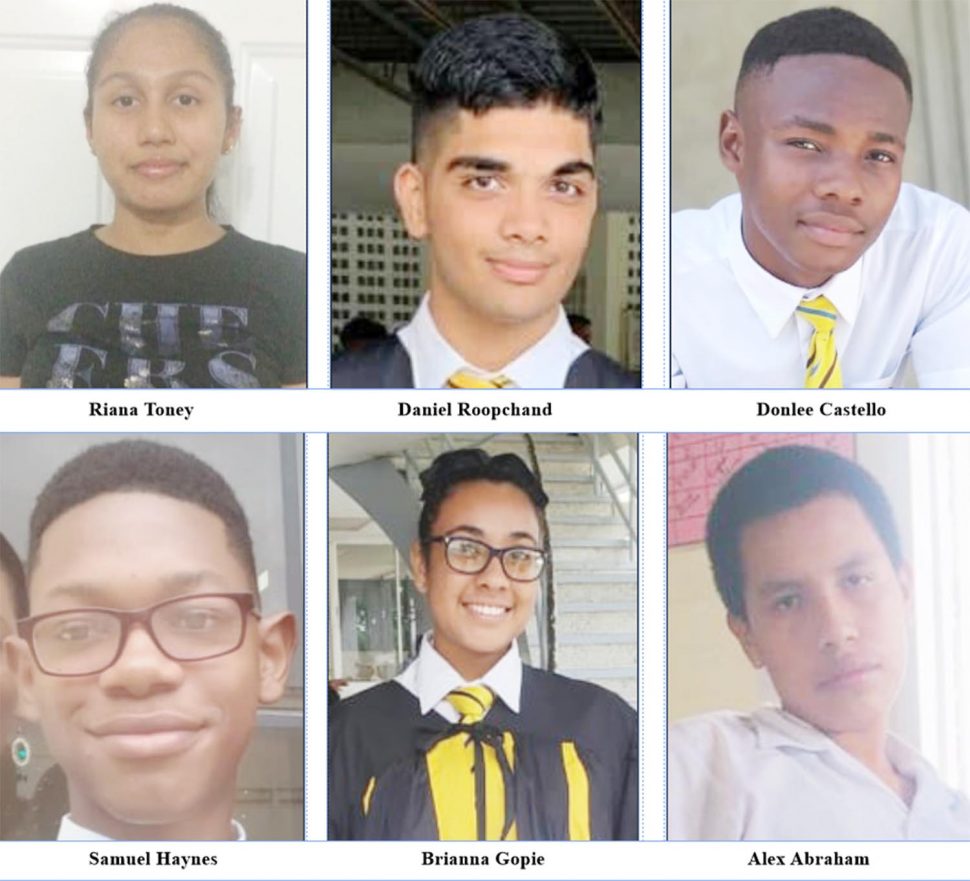 She told Stabroek News that she was shocked and overjoyed.

Toney, who aspires to become a Microbiologist wrote the subjects not only “to challenge” but also because she wants to be “an all-rounder” who knows a little bit of something from different fields. In addition, she said, if she decides to change her current career-path she will have a number of choices from which to select.

Although CSEC requires a lot of study-time and sleepless nights, Toney said, she participated in as much extracurricular as she could have, including being part of her school’s debate Team and participating in a science quiz. Toney who attributes her success to her parents, teachers and God revealed that she is currently undecided on whether she should attend the University of Guyana this year.

According to a report by the Department of Public Information (DPI), Abraham of St Rose’s High is part of the Hinterland Scholarship Programme. Abraham who is reportedly from Santa Rosa, Moruca sub-District, Region One was in that area when Stabroek News attempted to contact him.

Speaking with Stabroek News, the Buxton-born youth said that he is very ecstatic about being among the top performers in the country.

“I always knew I had the potential to do great things, with the help of God,” Haynes happily commented.

For Haynes, preparations began in fourth form with lessons for subjects he knew to be his weak area. Despite all his studying, however, Haynes said he managed to keep up with extracurricular activities. He revealed that he would sleep three to four hours a night to accommodate his studies along with extra-lessons and reduced social interaction as examinations came closer.

“Major thanks to God, my parents as well; both of them were a huge impact in where I am today and teachers like Dianne Henry, Sir Simeon from Bladen Hall Multilateral among countless others,’ he said.

Meanwhile, Donlee Castello also of Queen’s College was a bit disappointed in his results as he was expecting to do “much better.”However, he remains thankful as he “could’ve done much worse.”The 17-year-old of Tuschen Housing Scheme wrote 20 subjects and according to the results revealed by the Ministry of Education, he achieved 17 Grade Is and three Grade IIs. He plans on returning to QC for sixth form in September to pursue studies in Law,

He noted that for him the most challenging part of his journey was the hour-long drive from Tuschen to Georgetown.Castello said, he would arrive home at 9 pm after lessons and sleep two hours before waking up to study.

“Sometimes I would sleep on my way home,” the youth told Stabroek News. His success, however, would not have been possible without his parents who he said sacrificed “a lot” for his education, his siblings who would offer to do his chores when he was studying, his church members who prayed daily for him to pass his examinations and his teachers from his school and extra-lessons.

“Thank you so much to God and I would advise future CSEC students to, first pray, know yourself, trust God ‘cause without God nothing is impossible and I would like them so see my life as an example cause he answered my prayers,” Castello concluded.

On the other hand, 16-year-old Vijay Sharma who attained 16 Grade I and two Grade II revealed that his results came as no surprise to him even as he was skeptical of his position in the top performers since unlike other students he was unable to attend extra lessons.

Regardless, Sharma said that he studied very hard but he always tried to balance his studies and extracurricular activities. The QC student also plans on returning to the school to attend 6th form.

“I was shocked when the Minister called my name when she was revealing the names of the top performers,” a happy Daniel Roopchand said.

Roopchand is also a former student of Queen’s College and while he is currently unsure of what he plans on doing next, he says, it is likely that he will attend sixth form at QC. According to the Ministry of Education he attained 16 Grade Is and one Grade II in CSEC examinations.

Like the others, Roopchand also had countless sleepless nights. “I refused to enter an exam without ensuring that I had grasped every topic,” he added before revealing that he too went to extra lessons. Further, he said, he was sick with the flu for half of the examination period and his accomplishment would not have been possible without the help of his teachers and parents. Roopchand aspires to become a neurosurgeon.

Speaking with Stabroek News, Brianna Gopie, of Queen’s College said that she was more than happy with her results but she wasn’t surprised because she wrote the number of subjects she knew she could have handled.

Gopie, 16, attained Grade I passes in 16 subject and she also plans to attend Sixth form at QC in September.

She revealed that she attended extra-lessons “every single day” and tried the difficult task of balancing her studies and extra-curricular activities.

She also said that she finds it very hard to focus but tried to study especially in her weak subject areas. To the students who will be writing the CSEC examinations, she said, “No matter how difficult things seem to be going, once you put your mind to it and you work and do your best you will always get the results that you want to see.”

She also noted that her success would not have been possible without the sacrifices of her mother along with the teachers from her school and lessons.

Our Math performance still trails Jamaica though.  That island being another CXC laggard.  Jamaicans have never been known to have a good educational system aside from that available to its elites.

They should not be ranking these children this way. They should be celebrating them as great scholars and conscientious performers in academics. This kind of accolade sets them up for terrible failure if they should come to a competitive environment and lag a little.

Sign In To Reply
Post
Current Visitors: 15 (1 member, 14 guests)
Welcome to the Original Guyanese Discussion Forums, first established in 1996. Here you can discuss, ask questions or generally debate anything related to politics, movies, music, health or just gyaff away your day/night here. A note of warning, the Political forum is not for the faint of heart.  We do have some rules, so please adhere to them .
Do not post any messages that are obscene, vulgar, sexually-orientated, racist, hateful, threatening, or that otherwise violate any laws. Do not post any messages that harass, insult (name calling), belittle, threaten or mock other members.
Do not use profanity, racial, ethnic, religious, or other slurs and stereotypes, or post sexually-oriented material, masturbatory and excretory references, or any other offensive material.

Wildflower replied:
No pope’s nose but I’ve heard that a delicacy is bull’s ….aaah never mind 😂 I bought a breadfruit yesterday, will boil n fry that...
Wildflower replied:
Agreed…yummmmmm Wish I could find some of that in my neighbourhood. Problem is my ppl dem don’t eat dis and dat…one don’t eat sheep at...
Wildflower replied:
Siggy, she has a beautiful voice…I fell asleep and must listen again…hope I don’t doze off again😀
What’s on the menu / favourite foods
2 hours ago
PNC Georgetown district passes no confidence motion against Granger
3 hours ago