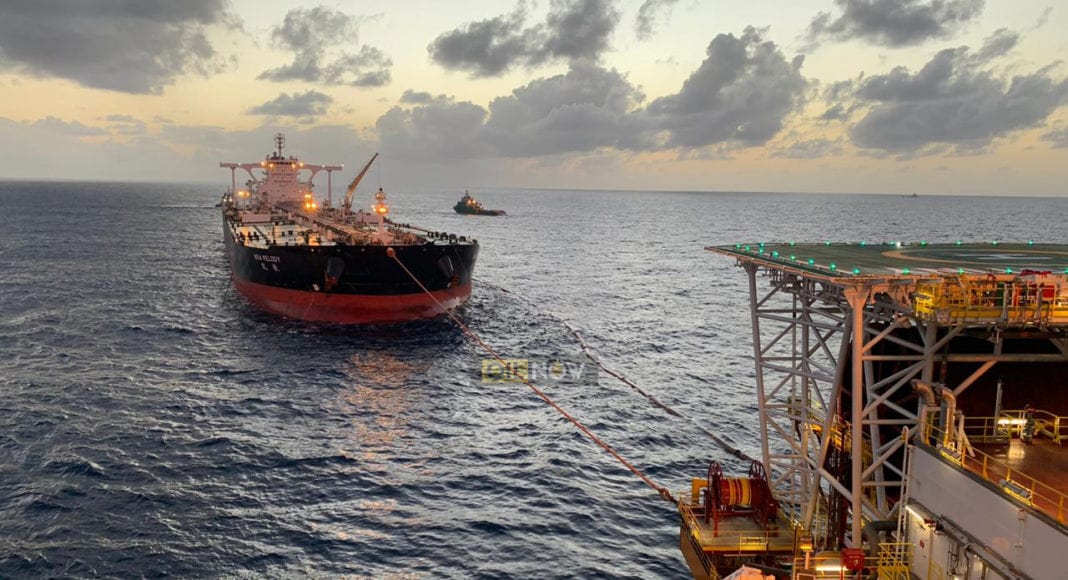 As of October 31, 2021, Guyana’s Natural Resources Fund (NRF) grew to US$534 million. This is according to a monthly oil fund report prepared by the Ministry of Finance (MoF). The last reported figure in the NRF was US$436 million, which means that for the latest oil lift of one million barrels to Saudi Aramco subsidiary Aramco Trading Limited (ATL), Guyana received US$80.4 million.

According to the financial summary, the net balance with royalties and interests stood at US$111,342,541 with no outflows from the fund into the Consolidated Fund. For 2021, one more oil lift is expected, making a total of five lifts for the year.

OilNOW understands this lift is set to take place in just over a week. At the current Brent oil price, the country can potentially receive around US$80 million for this export pushing the total revenues in the NRF to well over US$614 million with royalties by year-end.

The government has been keen not to include any of the oil funds into its budgetary configurations since it believes that the laws governing the NRF are not robust enough to protect it from mismanagement and political interference. To this end, Guyana recently received support from a high-level Ghanian team on how to move forward with the NRF. In an engagement with Attorney General Mohabir Anil Nandlall S.C last week, the team, which was led by Chief Executive Officer (CEO) of Ghana’s National Gas Company (GNGC), Mr. Benjamin Asante, also gave support to Guyana’s local content legislation and the US$900 million gas-to-energy plant.

Guyana’s President, Dr. Mohamed Irfaan Ali is optimistic that the government will lay the NRF legislation in the National Assembly before the end of the year. Earlier this year, the President had shared that his administration was examining the Norwegian and Khazastani NRF models to see what can be incorporated in Guyana.

Norway’s wealth fund was established in 1990, during the European country’s deepest recession in the postwar period. At the time, it was not obvious that the fund would gain much in value. The government ran budget deficits in the following years and the first capital transfer to the fund was made in 1996, reflecting a net fiscal surplus. From then on, the value of the fund started to increase rapidly. Higher oil revenues towards 2000 led to calls for higher spending and a fiscal rule was established in response to this development. The aim was to phase petroleum revenues into the economy gradually.

Meanwhile, Kazakhstan’s fund was established in 2000 as a dual-purpose stabilization and savings mechanism. It requires that deposit rules are detailed and requires deposits of oil and gas revenues into the fund as well as the proceeds from the privatization of state property from the mining, manufacturing, and agricultural sectors. Withdrawal rules are detailed but were changed three times in seven years. While there are some limitations on investment risk, the government enjoys significant discretion in choosing where it invests.

Notably, energy analyst Arthur Deakin of regional consultancy group, Americas Market Intelligence (AMI), has encouraged Guyana to go in the direction of the Norwegian model since it is completely insulated from political manipulation.

Yuh know, poor people still poor just like countries who has been pumping for over 50 years now. Giving handouts will never bring them to a comfort level. Investments will.

Sign In To Reply
Post
Current Visitors: 37 (2 members, 35 guests)
Welcome to the Original Guyanese Discussion Forums, first established in 1996. Here you can discuss, ask questions or generally debate anything related to politics, movies, music, health or just gyaff away your day/night here. A note of warning, the Political forum is not for the faint of heart.  We do have some rules, so please adhere to them .
Do not post any messages that are obscene, vulgar, sexually-orientated, racist, hateful, threatening, or that otherwise violate any laws. Do not post any messages that harass, insult (name calling), belittle, threaten or mock other members.
Do not use profanity, racial, ethnic, religious, or other slurs and stereotypes, or post sexually-oriented material, masturbatory and excretory references, or any other offensive material.

Mitwah replied:
Re: Songs in memory of Dara ( Khaleel Mohamed)