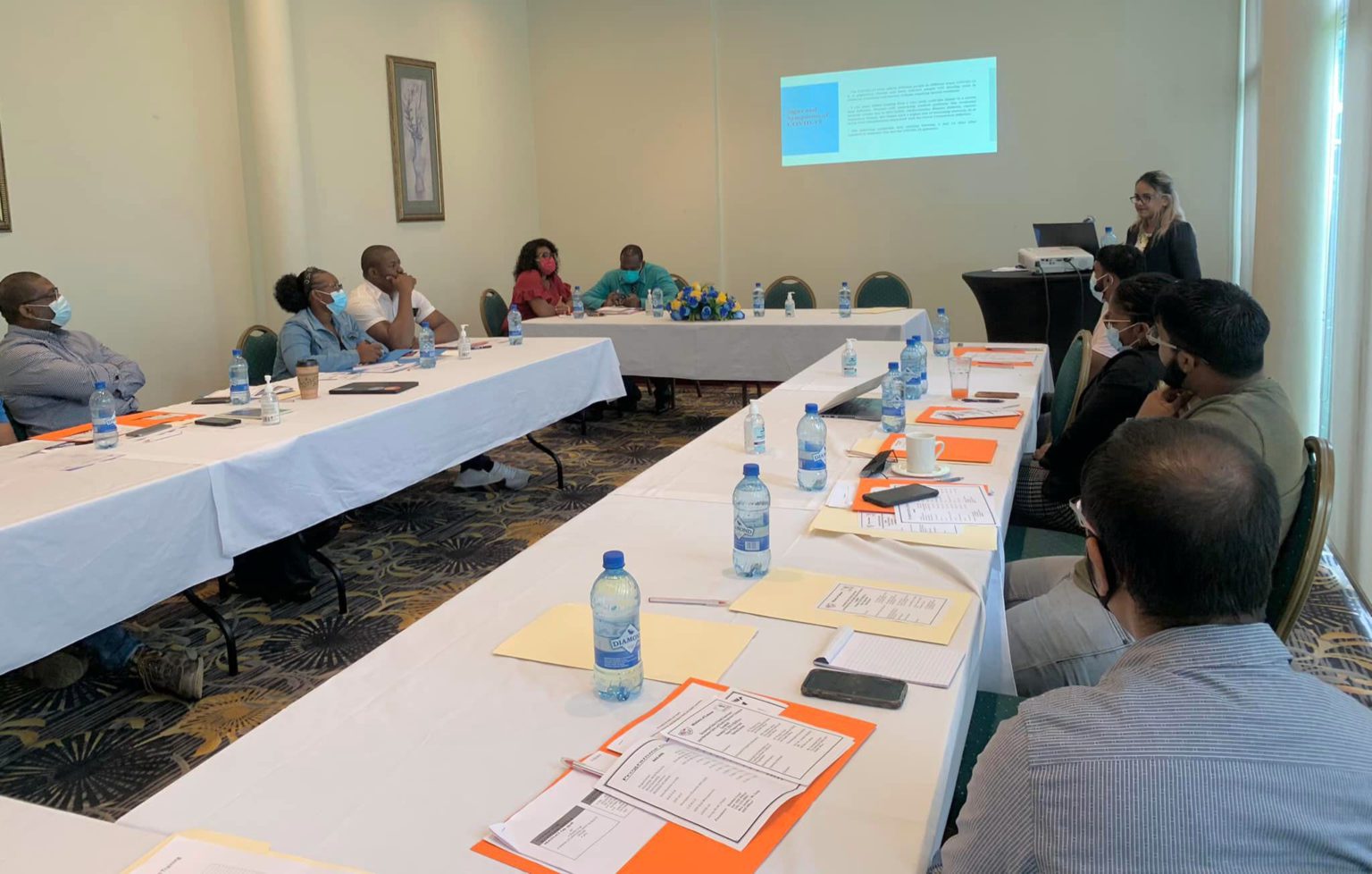 Guyana’s Ministry of Labour said it is forging ahead with establishing strong relationships with oil and gas companies operating in the new oil producing South American country and promoting more health and safety awareness in the sector.

On Monday, the ministry launched a two-day Joint Occupational Safety and Health (OSH) Committee Training Programme for representatives of ExxonMobil.

The programme, which is being conducted at the Pegasus Hotel, was developed to train members of the Joint Workplace Safety and Health Committee established with Exxon and enable them to execute their mandate in the workplace as required by the provisions of the Occupational Safety and Health Act, Chapter 99:10.

The core objective of the programme is to equip the representatives with sufficient knowledge and skills to develop and maintain safe systems and safe methods of work, which will ultimately minimize and/or eliminate workplace accidents. However, the programme also features other learning objectives such as enabling the participants to demonstrate an understanding of the basic tenets of OSH; ensuring they can recognize and evaluate hazards in the workplace and describe measures for their elimination and control; ensuring they can competently conduct accident investigations; and more importantly ensuring they know and understand their roles and responsibilities as representatives of the Joint Workplace Safety and Health Committee.

Moreover, it is expected that following the completion of their training, the participants will also be able to conduct a workplace inspection and prepare a place to control and/ or eliminate hazards in their own workplaces.

Routledge while giving brief remarks stated that adequate safety and health training is important, and the company embraces the opportunity provided by the ministry to ensure it understands the expectations of the OSH Act and the best practices that will be shared throughout the programme. 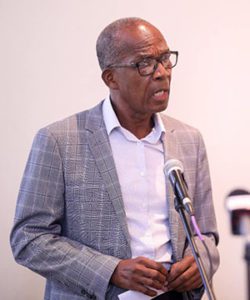 On the other hand, the labour minister during his address highlighted that Exxon would have been the first company that the ministry established a Joint Workplace Safety and Health Committee with through the OSH Department and since then the company has been supportive of the ministry’s regulation of OSH throughout the country.

He outlined that as it relates to enforcement of the OSH Act, the ministry is keen on holding both private and public sector entities to the same standard because “there is no sacred cow”. The minister said that all officers of the ministry conduct their inspections impartially adding that, “My position is…the same way how you go up to GTT or you go down to ExxonMobil, you must go down to GGMC and Ministry of Health or wherever because everywhere must be safe.”

In addition, he called attention to the fact that there have been approximately 50 reported workplace deaths since he assumed office last August, which is a grave concern. 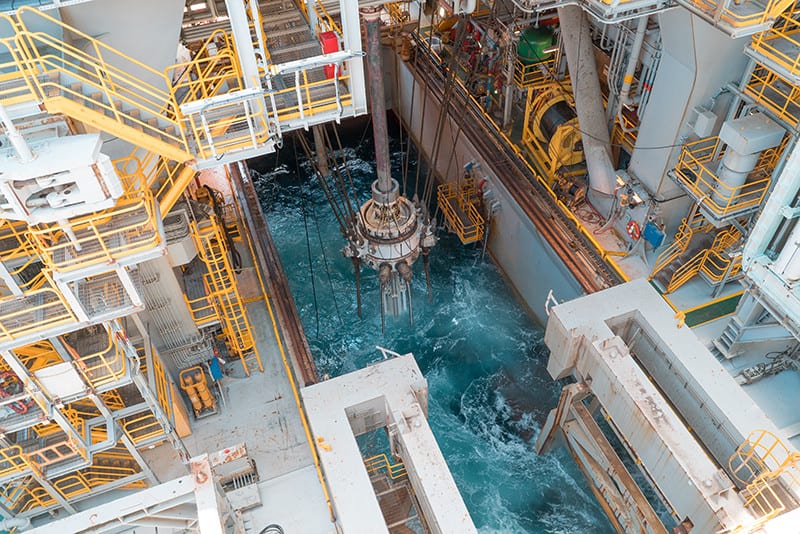 In photo: drilling on-board the Noble Bob Douglas in April 2018 off the Guyana coast at the Sorubim-1 well.

The Guyana-Suriname Basin is currently a big operating arena for deepwater players Maersk Drilling and Noble Corporation, and according to S&P Global Platts, the companies are looking to expand this position as they merge to create a world class offshore drilling firm.

The Guyana-Suriname Basin is an emerging deepwater play off the northern coast of South America. A group led by ExxonMobil has made more than 20 major discoveries amounting to around 10 billion barrels of oil equivalent in Guyana.  The consortium, which also includes Hess Corp. and China’s CNOOC, has one development producing with a second expected online in Q1 2022, and is in the design phase or construction of two to three more. All told, Exxon expects to have around 10 FPSOs operating off the Guyana coast in the coming years.

Moreover, TotalEnergies and APA Corporation have made four big discoveries in Suriname, although their specific development plans are still under study. APA Corporation said last week that it successfully completed flow testing at the Sapakara South appraisal well and drilling results from the Bonboni exploration well in Suriname, on Block 58.

Noble currently has four contracted deepwater drillships active in Guyana. One, the Tom Madden, has a contract that runs until January 2027. In addition, Noble recently inked a deal for a drillship with APA Corp in Suriname for one firm well and two well options.

Maersk currently is running two Suriname deepwater rigs and one in Guyana.

And both companies also work in Norway (Maersk with four jackups, Noble with one), a market the drillers said they see recovering after a 2020 lull.

A recent Norwegian tax incentive package is expected to spur new investments and rig demand in 2023 onward. That shallow-water market is ideal for Noble/Maersk harsh-environment jackup rigs, with “promising” potential based on current field projects’ status, the companies said.

“There’s far too many companies for this to be a viable landscape, and consolidation is inevitable,” Mullen said. “We’re going to see quite a lot more.”

Noble and Maersk shareholders will each hold 50% in the combined entity, which will be named Noble Corp. with headquarters in Houston. Its shares will be listed on both the New York Stock Exchange and Nasdaq Copenhagen.

By 2023 and afterward, the combined driller’s free cash flow yield should be about $375 million, for a percentage yield of 11%, which slightly exceeds that of the S&P E&P index, according to presentation slides. The deal would achieve cost synergies of $125 million/year, realized in the first two years as a combined entity.

Sign In To Reply
Post
Current Visitors: 20 (3 members, 17 guests)
Welcome to the Original Guyanese Discussion Forums, first established in 1996. Here you can discuss, ask questions or generally debate anything related to politics, movies, music, health or just gyaff away your day/night here. A note of warning, the Political forum is not for the faint of heart.  We do have some rules, so please adhere to them .
Do not post any messages that are obscene, vulgar, sexually-orientated, racist, hateful, threatening, or that otherwise violate any laws. Do not post any messages that harass, insult (name calling), belittle, threaten or mock other members.
Do not use profanity, racial, ethnic, religious, or other slurs and stereotypes, or post sexually-oriented material, masturbatory and excretory references, or any other offensive material.