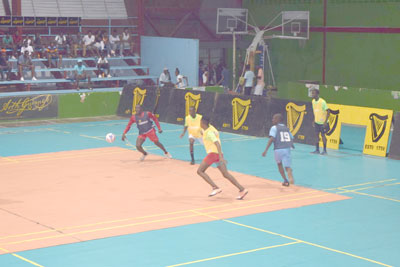 Action on day one of the Guinness Cage Indoor competition.

It was upset galore on opening night of the inaugural Guinness Cage/Three Peat Promotions Indoor Competition which got started on Tuesday night, at the National Gymnasium. Played before a large crowd that included Guinness Brand Manager Lee Baptiste and Banks DIH Communications Manager Troy Peters, the thirty –two teams that were on show treated the fans to an exciting brand of football with quite a few underdogs registering upsets against some well established teams.
Among the early casualties was Sophia who were soundly beaten 3-0 by newcomers MBK All Stars, while Ol Skool Ballers squeezed past Broad Street 2-1 and West Demerara’s Showstoppers edged a strong Tucville unit 1-0.
Teams from the Mining Town of Linden found the going tough with Guinness national champions Dave & Celena All Stars losing in a penalty shootout against Pike Street, Sophia, who were returning to competition after a hiatus, while Silver Bullets exited the competition after going down to Tiger Bay 1-2.
However, some of the other top teams advancing to the Group stage are Sparta Boss, West Front Road ‘Gold is Money’, Tiger Bay, North Ruimveldt, Albouystown ‘A’ and ‘B’, Hustlers, Future Stars, Back Circle, Champion Boys, Mocha and Leopold Street.
Over $800,000 in prize monies and trophies will be up for grabs with the winner set to receive $400,000 and the championship trophy, while second, third and fourth placed finishers will take home $200,000, $100,000 and $50,000 along with trophies respectively.
The other playing dates for the championship are August 31, September 5, 7, 9 with the final set for September 16, at the same venue. Among the other sponsors on board are: Star Party Rentals, Faye Joseph, Claude Geddes Recreational Sports Club, National Sports Commission, Windjammer International Hotel & Cuisine, Woodpecker Trophies & Sport, Y.K Investments & Pawn Shop, Henry Chase, Jai Signs, Trophy Stall of Bourda Market and John Fernandes Ltd.
Once again the Organisers are asking all to work together with them to pull off what is already shaping up to be an exciting and successful tournament. The Group stage commences this evening with eight scheduled games, starting at 19:00hrs.
The fixtures are as follows: Albouystown-B vs North Ruimveldt-19:00hrs, MBK All-Stars vs Leopold Street-19:30hrs, Hustlers vs Tiger Bay-20:00hrs, Albouystown-A vs Showstoppers-20:30hrs, Gold is Money vs Mocha-21:00hrs, Future Stars vs Pike Street Sophia-21:30hrs, Back Circle vs Champion Boys-22:00hrs, Sparta Boss vs Ol Skool Ballers-22:30hrs.

Welcome to the Original Guyanese Discussion Forums, first established in 1996. Here you can discuss, ask questions or generally debate anything related to politics, movies, music, health or just gyaff away your day/night here. A note of warning, the Political forum is not for the faint of heart.  We do have some rules, so please adhere to them.
Join Now
Loading...
Current Visitors: 490 (12 members, 478 guests)

Bai, AFC PNC are acting out of desperation. They know that they are finished. PPP supporters have to remain focused on the bigger prize...
9 minutes ago

Bai, they are finished. Granger and Moses destroyed the PNC for good. If only they had taken advantage of the tremendous amount of...
17 minutes ago

THOSE PEOPLE ARE ANIMALS. THEY CANNOT HELP BEING WHO THEY ARE!! THE ERC IS ONLY THERE AGAINST THE PPP! FRIGGIN RACIST PIGS CALLED PNC!!
18 minutes ago