Guinness Cage / Three Peat Promotions Indoor Competition… Fans to get 16 games for the price of one tonight; riveting action predicted 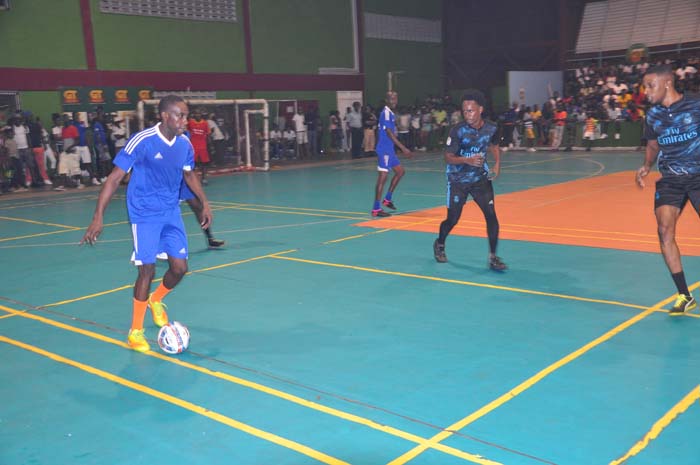 Futsal action at the Gymnasium in a recent tournament.

Guinness Cage / Three Peat Promotions Indoor Competition… Fans to get 16 games for the price of one tonight; riveting action predicted

If there was ever a reason to be at the National Gymnasium, tonight’s opening of the inaugural Guinness Cage / Three Peat Promotions Indoor Competition is the perfect motivation to be there.

Following the forced postponement of the previously scheduled opening last Thursday, the Organisers have decided to give back to the fans for their patience and understanding and have planned sixteen matches for tonight’s round of action which commences at 19:00hrs.
All thirty-two teams will be in action this evening with the winners set to move forward to the round robin stage, while the losers go home. Among the top teams slated to take to the court this evening are the upcoming Future Stars who has become a fan favourite, Guyana’s most successful futsal team Sparta Boss who has a lot to prove following some lacklustre performances, West Front Road ‘Gold is Money, a team that has looked a rejuvenated and in fine form and national Guinness champions Dave & Celena All Stars.
These teams are among the early favourites to win the tournament, but teams such as Albouystown ‘A’, West Demerara’s Showstoppers, Champion Boys from Agricola, Tiger Bay, Broad Street, Silver Bullets from the Mining Town of Linden, Sophia and Back Circe are all teams capable of turning all the early predictions on its head.
These teams are very experienced in this format and ignoring their chances of winning the coveted prize could prove to be disastrous. This is the first time that fans will get to see non-stop action with the ball being deemed dead only behind the goal line.
It is usually breathtaking stuff with end to end action and fitness will be tested to the maximum.
According to the Organisers, teams’ substitutes will have to be at the same skill and fitness levels for them to survive what is predicted to be a grueling competition with the right of being crowned inaugural champions a top priority.
Speaking with Sparta Boss’s Eusi Phillips recently, he disclosed the team has been undergoing rigorous preparations as they seek to reclaim glory and their monarchy.
”We’ve not been doing well recently, having exited the last three tournaments before the championship game, but we know that we are capable of beating all these teams and we aim to get back to winning ways,” he said.
Meanwhile, West Front Road, winners of the last indoor tournament are in good form and word from the team indicates that they intend to continue on the path of success. Future Stars has been around for a short time even though they are stacked with players who’ve played for different teams, but their chemistry and skill level has made them a dangerous unit to go up against and have already beaten some of the top teams in the format.
There is no doubt the tournament will provide exciting action and fans will be in for a treat over the eight scheduled playing days. Over $800,000 in prize monies and trophies will be up for grabs with the winner set to receive $400,000 and the championship trophy, while second, third and fourth placed finishers will take home $200,000, $100,000 and $50,000 along with trophies respectively.
The other playing dates for the championship are August 31, September 2, 5, 7, 9 with the final set for September 16, at the same venue. Among the other sponsors on board are: Star Party Rentals, Faye Joseph, Claude Geddes Recreational Sports Club, National Sports Commission, Windjammer International Hotel & Cuisine, Woodpecker Trophies & Sport, Y.K Investments & Pawn Shop, Henry Chase, Jai Signs, Trophy Stall of Bourda Market and John Fernandes Ltd.
Once again the Organisers are asking all to work together with them to pull off what is expected to be an exciting and successful tournament.
Following are the fixtures: Sophia vs MBK All-Stars-19:00hrs; Broad Street vs Old School Ballers-19:15hrs; Tucville vs Showstoppers-19:30hrs; Dave and Celena vs Pike Street Sophia-19:45hrs; Tiger Bay vs Silver Bullets-20:00hrs; West Back Road vs Albouystown-B-20:15hrs; Leopold Street vs Plaisance-20:30hrs; North Ruimveldt vs Melanie-20:45hrs; Bent Street vs Hustlers-21:00hrs; North East La Penitence vs Mocha-21:15hrs; Champion Boys vs Channel-9 Warriors-21:30hrs; Albouystown-A vs Alexander Village-21:45hrs; Gold is Money vs Campbellville-22:00hrs; Future Stars vs Agricola Gas Team-22:15hrs; Back Circle vs New Market Street-22:30hrs; Sparta Boss vs Vryheid’s Lust-22:45hrs.

Welcome to the Original Guyanese Discussion Forums, first established in 1996. Here you can discuss, ask questions or generally debate anything related to politics, movies, music, health or just gyaff away your day/night here. A note of warning, the Political forum is not for the faint of heart.  We do have some rules, so please adhere to them.
Join Now
Loading...
Current Visitors: 249 (3 members, 246 guests)
Oi Prash he kinda dark, anything we should know, you know what ah talkin about? Dark Arabian roots, etc..Sheik likes dem story
4 hours ago

That is a big crowd and that is Trump heart land.
4 hours ago

Prashad predicts that the Rankster will be elected to Parliament.
4 hours ago

Re: MASSIVE Turnout at PPP-C Meetings .
6 hours ago

Ralph Ramkarran, A New & United Guyana.. will he make it to the finish line...
4 hours ago

Ocasio-Cortez Rips Bloomberg on Stop and Frisk: 'Just a Billionaire Trying to Cover Up Authoritarian and Racist Policy'
4 hours ago