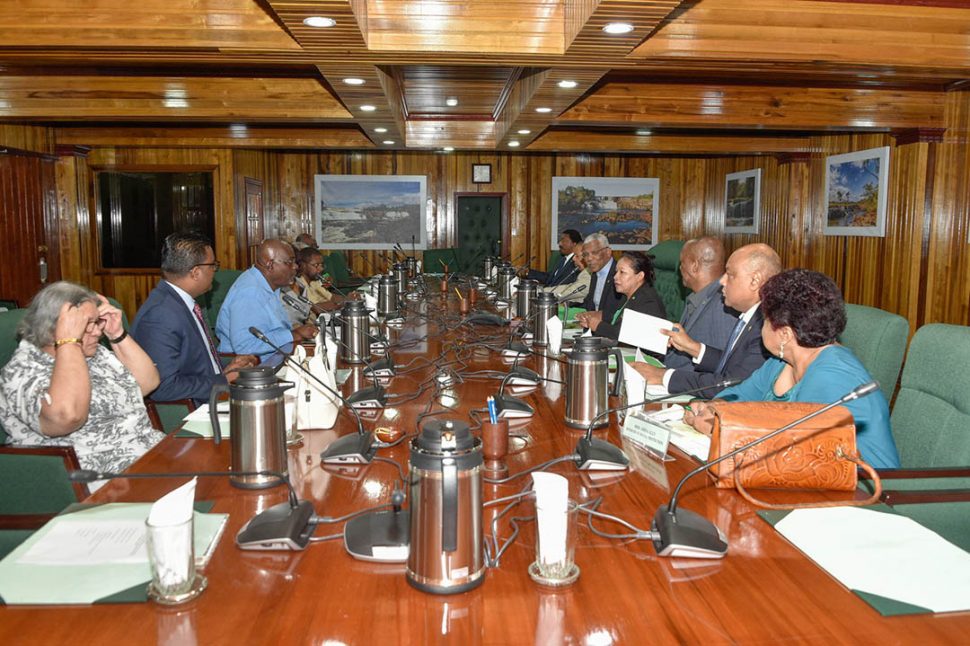 President David Granger and his team (right) meeting with GECOM and the Chief Election Officer, Keith Lowenfield. (Ministry of the Presidency photo)

President David Granger today met with the members of the Guyana Elections Commission (GECOM) and reassured that government will continue to respect its independence and await its advice on the holding of “credible elections,” while appearing to back down from his previous hardline position on the need for house-to-house registration to update current voter database.

“Although it is early in the tenure of the new Chairman, I don’t think it was inappropriate to meet at this time to give her the assurance that the government is going to continue to observe the independence of the Elections Commission; it will not dictate, it will not interfere, it will not intrude in the work of the Commission. It will observe all of the roles and responsibilities of the commission given to it by the Constitution… Right now, the government is very respectful of the role of the Elections Commission and once I receive advice from them or from the Chairman of the Commission, I will act on that advice and we expect that all Guyanese will respect the independent role of the Elections Commission and that we will proceed to general and regional elections in accordance with the work which that commission has to do,” Granger told reporters following the meeting at the Ministry of the Presidency.

He added that during the meeting, , which lasted for less than 30 minutes,  the Chair committed that once the full commission meets on August 15th, she will communicate its position.

Granger, who has repeatedly stated that credible elections can only be conducted with a credible list generated from house-to-house registration, appeared to back down from this position as he declared “it is for commission to say how it will correct the list.”

“We will provide commission with all the resources,” he stressed.

The current registration exercise is the subject of a court challenge and acting Chief Justice Roxane George-Wiltshire is expected to rule on its constitutionality on August 14th.

Asked specifically if the government will appeal an unfavourable ruling, he responded, “I said what I said.”

President Granger further indicated that he and Opposition Leader Bharrat Jagdeo will be meeting tomorrow, during which time they might discuss their different interpretations of the ruling of the Caribbean Court of Justice on the implications of the no-confidence motion that was passed against his government last December.

The opposition has repeatedly stated that in keeping with Article 106 (6), Cabinet, including Granger, should have resigned following the ruling, which deemed the December 21st no-confidence motion to have been properly passed.

Granger, however, has informed Jagdeo in a letter that the court “did not issue orders that I should dissolve the National Assembly, fix a date for General and Regional Elections and that I should resign from the Office of President.”

His government has argued that in keeping with Article 106 (7), it will remain in office until an election is held, although it has not signaled when this could be. Reports that a December date might be favoured were dismissed by Granger, who said he would wait on GECOM.

He also dismissed calls for a three-month deadline, while noting that if ballot papers have not yet been printed he could not tell the Commission to have elections on the 18th of August.

Meanwhile, one of the three opposition-nominated commissioners, described yesterday’s meeting as a “colossal” waste of time.

“It’s a colossal waste of my time this morning and I think it’s a collective waste of the Commission’s time this morning,” attorney Sase Gunraj said of the meeting, while adding that it discussed “nothing that was new.”

“What we were subjected to is the regular nonsense from the Executive about following the Court’s decision…nothing that is new, no new position to be given, no new discussions to on the agenda, so like I said it was just a waste of time this morning. This meeting is premature…because we are awaiting a decision from the court in relation to the conduct of the house-to-house exercise as well as we’re awaiting a full meeting of the Commission, so I reiterate, this is just a waste of time,” he added.

Gunraj’s comments were criticised by Prime Minister Moses Nagamootoo as “rude and disrespectful to the executive” but Gunraj disagreed.

“I stand by it. The meeting could not have been considered any sort of consultation. The Chair gave a brief update that we are waiting for ruling from the Court, that we have not yet met as a commission and that we are commencing training on Saturday for Election Day staff. That was it.  We did not need to be there for that,” he told Stabroek News in an invited response.

I agree with Gunraj. It is a damn waste of time. He met with all of them when the woman was sworn in. He is notorious for not making himself available for anything so this meeting is indeed to accomplish the opposite of his hypocritical statement "that the government is going to continue to observe the independence of the Elections Commission; it will not dictate, it will not interfere, it will not intrude in the work of the Commission. It will observe all of the roles and responsibilities of the commission given to it by the Constitution…"

Plus Nagamootoo is an idiot.

Welcome to the Original Guyanese Discussion Forums, first established in 1996. Here you can discuss, ask questions or generally debate anything related to politics, movies, music, health or just gyaff away your day/night here. A note of warning, the Political forum is not for the faint of heart.  We do have some rules, so please adhere to them.
Join Now
Loading...
Current Visitors: 57 (0 members, 57 guests)
It's not every Tom, Dick, Mary pictures need be on those posters only those running in the election should be there
3 hours ago

This has to be a nightmare for the Chief. He is caught between Anti Muslim Trump and Bernie who does not believe in God.
3 hours ago

He just gotta hit up Bloomberg and if Bloomberg really cares for the country he could fork over a few billion an still lef with more...
4 hours ago

Indeed, indeed, indeed .... Excursion trip - meaning specifically for one's leisure - to India to look-see and have a one-in-a-trillion...
4 hours ago

Mexico will pay for all of it.
5 hours ago
Mash Day today
3 hours ago

Ray Please listen to Brother Anand Speak
4 hours ago
Trump heads to India, where massive rally and Taj Mahal visit await: What to know
4 hours ago

STATEMENT BY COMMISSIONERS SHADICK, GUNRAJ AND BENN ..re: List of polling station ..
5 hours ago

No evidence of Russian 'play' to help Trump, briefer may have 'overstated' intelligence, official says
6 hours ago

Sanders will destroy the Democrat Party
6 hours ago