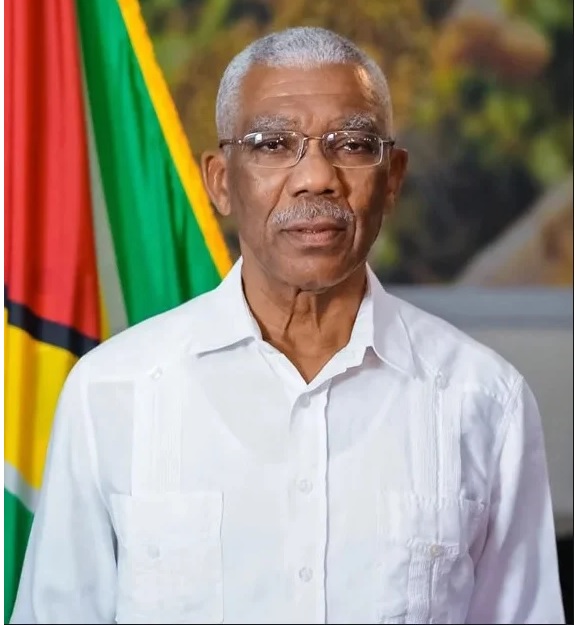 In the face of mounting pressure to accept the results of the recount which show that he lost the March 2nd  general elections, President David Granger yesterday said that he will not prematurely accept either defeat or a win and will await the official declaration of the Guy-ana Elections Commission (GECOM).

“I cannot claim victory, which I have not done and I cannot concede to defeat; which I have not done, unless I am notified formally by the Chairman of the Guyana Elections Commission what the results of the elections …have been,” Granger yesterday told reporters, on the sidelines of the promotion and instrumenting of now Acting Chief of Staff Godfrey Bess.

While Granger has frequently said that he will accept “any” declaration by the GECOM chair, public skepticism of his intent has been fuelled by his sidestepping of a definitive report by CARICOM observers on the recount results which show a win for the PPP/C and his adoption of the report of the Chief Election Officer (CEO), Keith Lowenfield which has obliterated over 115,000 votes.

The caretaker president yesterday explained that his decision to wait on GECOM is grounded in the fact that the executive branch of government does not have role in managing elections as that role is given under the constitution, “exclusively” and “explicitly to the elections commission”.

In recent days, GECOM and the incumbent APNU+AFC government have come under increasing pressure to utilise the results of the 33-day recount of votes as the basis for the declaration of the result. Statements to this effect have come from Canada, CARICOM, the Commonwealth, the Euro-pean Union, Norway, the Organization of American States, the US and the UK.

Former Minister of Business and AFC member Dominic Gaskin has also urged the incumbent to be honest and accept its defeat and move on.

He was swiftly followed by The Justice For All Party (JFP), a member of the incumbent APNU+AFC coalition, which said that it recognised that the PPP/C had won the March 2nd elections and that party’s presidential candidate Irfaan Ali should be allowed to be sworn in without any delay.

Granger was asked about the stance of Gaskin and the JFP. He dismissed reacting to Gaskin as he said he was no longer a part of the government.

“I don’t have any comments on what former ministers say. I have comments on what active members say. In that regard, I have to advise that the partnership… as far as the other four partners in the APNU is concerned, they make statements on their own accounts. I do not dictate what they say, although I expect that what they say and do will be in one accord with the principles of the entire partnership. We meet and the JFP has never been excluded, especially over the last 17 weeks [since the elections] from the APNU,” he said.

“I am not responsible for what they say. But what I do know is that JFP acted on its own accord, and at our meetings we have clearly outlined the policy of the partnership and if is at variance, you must ask the president and secretary of the JFP,” he added.

Asked if the JFP had previously expressed any concerns about the elections during meetings of the coalition, Granger said no.

“I have no record of those concerns. We examine the process being pursued and the line the partnership was taking. There is no secret and all six parties know of the agenda… what was said was a matter for the leadership of the JFP and you must ask the JFP what was the motive,” he said.

On Monday evening, during the interview on Benschop Radio, Granger had said that the incumbent APNU+AFC continues to insist that the elections be decided not just on quantity of votes cast but on the quality of those votes.

“What we have found is that there is need for a deeper investigation into the anomalies and the irregularities that occurred countrywide. This has been done and has been a feature of the report the CEO presented to the Commission,” he maintained, before adding, “It is quite in order for the Chief Election Officer to rule that invalid votes cannot be counted as valid.”

He further declared, “It is unacceptable for the CEO to present a report that doesn’t take into account the fact that these irregularities have occurred and have affected the validity of the votes… this is the reason why the Court of Appeal ruled votes must mean valid votes. If votes are fraudulent or if votes exceed the number of persons on a list they cannot be valid votes.”

Granger, who has repeatedly stated that he will accept the results declared by the Chair of GECOM Claudette Singh, attempted to argue that the Commission was bound to make a declaration based on Lowenfield’s report rather than the certified results of the recount. Singh has said that the recount results will be used and she had instructed Lowenfield to prepare such a report. Lowenfield defied her and eventually presented his own version which triggered consternation from CARICOM Chair Mia Mottley, who with other CARICOM leaders had brokered an accord between Granger and Jagdeo for the recount.

And when the president spoke of the CARICOM observer team’s report on Monday evening, he did not mention that it stated that the recount was credible and reflected the will of the people of Guyana.

He has said that that persons need to read the document in its entirety. Granger was called out by Opposition Leader Bharrat Jagdeo who said that the very report states that it found the recount results credible and a basis for the declaration of the results.

“Mr Granger then goes on to conveniently to ask people to read the entire CARICOM report and I wonder if he read the entire report because the report he agrees with made it very clear in its finding in conclusion finds a credible basis for the declaration of the results,” he said. “He read one section where they spoke about what needs to be done in the future and he ignores the rest… it is not for Lowenfield to invalidate votes,” Jagdeo said on Tuesday.

Asked yesterday by Stabroek News about his selective highlighting of excerpts of the report and not ever referring to the fact that the report states that the recount results reflected the will of the people, the President said that he focussed on the recommendations.

Pressed on other aspects of the report and more specifically that the will of the people was reflected, the President said that observations are for the CEO of GECOM to note and present to the Commission.

“I quoted from the recommendations of the CARICOM Observer team and my words are accurately reflected in those recommendations. I don’t know if you are asking a question outside of that, but as far as I am concerned, the report of the tabulation is only one aspect of the report which the CEO needs to submit to the commission,” he iterated.

“The CEO has a responsibility to make note of the legitimate observations which have been made and present those observations to the commission. But as far as my citation is concerned, I read from the recommendations of the CARICOM team,” Granger added.

Isn’t this the same man who said he will abide by the results of the recount. Then when the results were released he hired Eslyn David to stop it.

Maybe Jango can point us to to any other leader in the civilized world that took 4 months to understand that he lost the elections.

Pompeo on their asses now with his latest statement, the whole PNC cabal running scared now.

Isn’t this the same man who said he will abide by the results of the recount. Then when the results were released he hired Eslyn David to stop it.

That was him alright. He is a liar.

Bond is the next leader of the PNC.
12 minutes ago

Mitwah. I got a friend from Africa who is a Canadian citizen. He is from Uganda and just did his law degree there. Do you know if it...
18 minutes ago

It's not the legal battles it's the interpretation of the articles ,it's been twisted to suit the purpose of of some politicians. It's...
19 minutes ago

Them thief men gon think Charrandas got gold.
22 minutes ago

Putin like he wants the job. He is not satisfied with Guymine.
25 minutes ago

Special probe team will work free of charge
25 minutes ago

Now that PPP has won. Time to take a breather
2 hours ago