Finished reading The French Lieutenant's Woman by John Fowles. I love this novel. The narrator is telling in 1969 a story set in the south of England between 1867 and 1869. That was a time of Victorian puritanism but, as the novel shows, also a time of hypocrisy and double standards. Class differences of the main characters brought out that hypocrisy more.

At the beginning of the novel the main character has the reputation of a prostitute but we discover later that she was actually a virgin. A woman of the lower class, she is not accepted as normal even by her social peers. She thinks differently and acts differently. I like such kinds of women.

Finished reading TO THE RIVER by Olivia Laing.

The author writes about hiking from the source of the River Ouse in Sussex England to its mouth, a distance of 46 miles. The journey lasted one week. She describes in extraordinary detail scenes along the way, and recalls the history associated with some places. She reminisces about the English writer Virginia Woolf who had deliberately drowned herself in the same river in 1941. I'm impressed with Ms Laing's deep knowledge of trees and other plants, birds and insects, so numerous along her path and she names them all.

Finished reading WHAT POETS ARE LIKE: Up and Down with the Writing Life by Gary Soto.

Shame on me, I had never heard about Gary Soto until last week when my library recommended him to me. He is a Mexican-American or Chicano poet, teacher, essayist and filmmaker. His track record is impressive: 14 poetry collections, 21 young adult/children's books, 1 play, 7 memoirs and 2 films. He won many awards.

Fresno City College in California has honoured him with a Gary Soto Literary Museum.

This particular book is a collection of personal essays. They are witty, informative, and inspiring. I'll certainly check out Gary Soto's other books.

Struggling to finish 'The Alchemist'....hoping to wrap it up this weekend, working 12 hours a day recently, just started a new job in February.

The Alchemist. ahhhh yessss, brings back great memories...Ohhhh yeahhh that was a really good book.

Finished reading My Life in Middlemarch by Rebecca Mead.

Middlemarch is an 800+ page novel by the English writer George Eliot whose real name was Mary Ann Evans.

Rebecca Mead, a middle-aged British-born staff writer of the New Yorker magazine, first read Middlemarch in her teens and became so fascinated with the novel that she has re-read it time over time. "I think Middlemarch has disciplined my character," she writes. "I know it has become part of my own experience and my own endurance."

In My Life in Middlemarch Mead explores the life and world of George Eliot, including the English midlands of Warwickshire, the real-life setting of the fictional place, Middlemarch.

Used to read those way back in High School.

i have is collection grow up on his books

Alena06, yes did that in high school too..i uses to fight with my brother whenever he borrowed them to read them first

Warrior, I have some of his books, ever so often will go back and read them.

Alena06, yes did that in high school too..i uses to fight with my brother whenever he borrowed them to read them first

Warrior, I have some of his books, ever so often will go back and read them.

The school library was my source.  I had a few keepsakes though, but left them behind  when I left Guyana.  One of my faves was 'To kill a mockingbird'..  Got it when I came first in my High School class.

Finished reading My Father's House: In Search of a Lost Past by Matthew Carr. The author is the eldest son of Bill Carr, a lecturer at the University of Guyana from 1966 until his death in 1991.

Matthew Carr, along with his mother and three siblings, had followed Bill Carr first to Jamaica where he lectured for 6 years at the UWI Mona Campus, thence to Guyana. They stayed in Guyana only 10 months and were sent packing back to England.

Bill Carr established himself in Guyana as an outstanding lecturer in English Language and English Literature, and as a competent dramatic actor at the Theatre Guild. He was less known as a PPP activist and Mirror newspaper columnist who wrote under the name Little Boy Blue. He however had his demons, principally alcoholism, and there was hardly a rum shop in and out of Georgetown that he hadn't visited.

I knew all these things before reading this book. I was shocked to discover within its pages that Bill Carr was a compulsive wife beater and a violently abusive father.

Matthew Carr retraces his steps back to Guyana five years after his father's death, visiting his grave and meeting Bill's Guyanese wife and friends to search for answers regarding Bill's  actions and motivations. * Arrite! Gabriel Tarde's The Laws of Imitation is next on my list.

A common fallacy is the idea that the majority sets the patterns and trends of social, economic and religious life. But history reveals quite the opposite: the majority copies or imitates the minority and this establishes the long run developments and socio economic evolutions.

Dumbo, leave that nonsense in Political. Only an idiot would send a link showing they are one of the most despicable persons on the board. 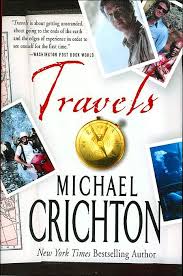 Often I feel I go to some distant region of the world to be reminded of who I really am.

When Michael Crichton -- a Harvard-trained physician, bestselling novelist, and successful movie director -- began to feel isolated in his own life, he decided to widen his horizons. He tracked wild animals in the jungles of Rwanda. He climbed Kilimanjaro and Mayan pyramids. He trekked across a landslide in Pakistan. He swam amid sharks in Tahiti.

Fueled by a powerful curiosity and the need to see, feel, and hear firsthand and close-up, Michael Crichton has experienced adventures as compelling as those he created in his books and films. These adventures -- both physical and spiritual -- are recorded here in Travels, Crichton's most astonishing and personal work

Just finished Sugar Ray Leonard's autobiography The Big Fight. Excellent reading for anyone who follows fight sports, great just to understand what it takes to be at the top. 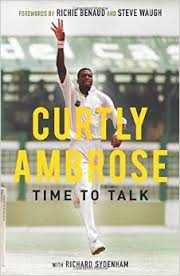 * Curtly Ambrose's "Time To Talk" is next on my list.

* What a great West Indian fast bowler! He is one of my favorites. He has been described as "one of the leading--and most lethal--fast bowlers of all time.

* During his career Curtly was notorious  for his silence---he rarely spoke to the press---his mantra was "Curtly talks to no one."

* This should be a fun read. 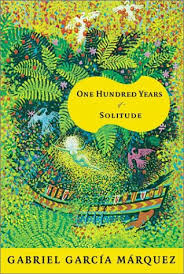 * Arrite! Next on my list is "One hundred years of Solitude" by Nobel Prize winner Gabriel Garcia Marquez.

Solitude is the soul's holiday, an opportunity to stop doing for others and to surprise and delight ourselves instead.

* I am curious to read what Gabriel Marquez has to say in his book that has been described as "one of the 20th century's most enduring works."

* Arrite! Next on my list is "One hundred years of Solitude" by Nobel Prize winner Gabriel Garcia Marquez.

Solitude is the soul's holiday, an opportunity to stop doing for others and to surprise and delight ourselves instead.

* I am curious to read what Gabriel Marquez has to say in his book that has been described as "one of the 20th century's most enduring works."

Excellent choice, Rev. I read it 27 years ago. In fact, Gabriel Garcia Marquez is/was one of my favourite authors.

Finished reading Adam Bede by the 19th century English novelist George Eliot. The story is based on a real life infanticide in 1802. Eliot gives a nice realistic portrayal of life in feudal society. As I mentioned earlier, my reading plan will include more classics this year.

Finished reading HIGH SEAS MISSIONARIES: Caribbean, Guyana & Amazonia 1991 by William Cooper. The author relates his experience with a group called Youth With A Mission as they ferried relief supplies and preached the Gospel in the Caribbean, Guyana and Brazil. I like people who put their lives on hold temporarily to serve a higher cause, whether in politics or religion or the environment or just plain charity. Honor before money. 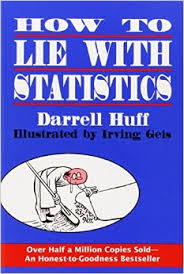 * I saw Bill Gates recommending Darrel Huff's "How To Lie With Statistics" at a TED conference, so I figure I'll take a peek.

* This book was first published in 1954. The Rev hopes to pick up a few useful tips on how to lie using stats.

* I saw Bill Gates recommending Darrel Huff's "How To Lie With Statistics" at a TED conference, so I figure I'll take a peek.

* This book was first published in 1954. The Rev hopes to pick up a few useful tips on how to lie using stats.

I couldda swear you had mastered this book already.

I couldda swear you had mastered this book already.

* The master always needs a refresher to keep sharp my bwoy.

You ought to know that.

PETER HOPKIRK'S 'TRESPASSERS ON THE ROOF OF THE WORLD' 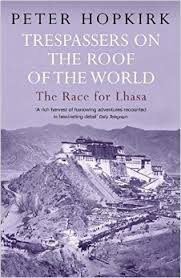 For nineteenth-century adventures, Tibet was the prize destination, and Lhasa, its capital situated nearly three miles above sea level, was the grandest trophy of all.

For hundreds of years men set out to explore the secrets of Tibet, hidden high in the mountains of Asia and long known as “the roof of the world.” In this collection of accounts, Hopkirk examines the various expeditions that set out to explore Tibet’s mysteries and their successes and failures.

* I'm into reading books on adventures these days.

In 1942 a plane carrying three male and two female Americans disappeared into the jungles of British Guiana. The plane was en route to make a sightseeing tour of the famous Kaieteur waterfall. Seventy years later, the great grand-daughter of one the crew decides to investigate what happened to the plane and her great grandpa. She is also determined to find out if the disappearance might be linked to a series of recent mysterious deaths in the vicinity of the falls, leading her into a deadly adventure of her own.

After reading this book, you will never think about Kaieteur Falls as you did previously.

May I suggest the following ... All the books members are recommending to read be listed somewhere in the main page header named "Book Club" or something like that mostly because - the thread is 10 pages long and it's going to get longer; lots to read ...