The “King of the Strip” drag race meet that raced off yesterday at the South Dakota Circuit ran into a speed bump and had be cut short after Vivek Joshi who had already won the 12 seconds class, lost control of his Alteeza and flipped over thrice in the final drag of the 12 seconds category. 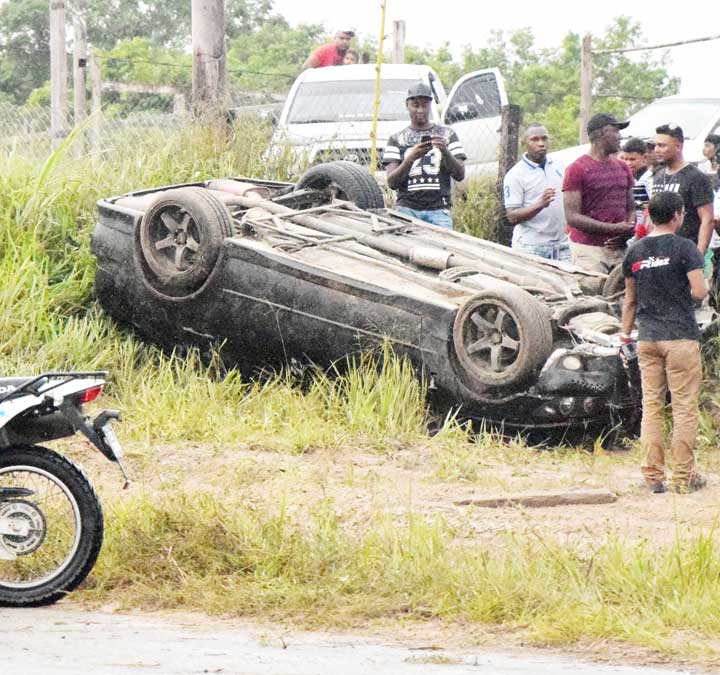 The emergency response was prompt to the scene and Vivek Joshi emerged unscathed from the accident.

Luckily for Joshi who was wearing all his protective gear, he didn’t sustain any injuries after he was repeatedly advised to not enter the final race since he had won the 12 seconds class division already.
Joshi’s crash prompted the organisers (GMRSC) to bring the event which was jabbed frequently by intermittent rainfall to an end. A new date will be announced for the meet’s continuation.
At that time, Pankraj Ramdeo had won the 15-seconds class in 15.386 seconds. Ryan Brijpal reigned supreme in the 14-seconds class with a top time of 14.745 seconds.
Surinamese Nevin Lalbeharie’s time of 13.474 seconds couldn’t be outdone in the 13 seconds class, while Vivek Joshi who won the 12 seconds class had a best time of 12.106 seconds.
Due to the rain which led to the wet surface, the anticipated unlimited class showdown between Team Mohamed’s Nissan GT-R Goliath and Shawn Persaud’s Toyota Caldina didn’t materialize. However, Mohamed’s excited the patrons with a friendly battle between their pair of Nissan GT-R sports cars.
Fans will have to wait for a subsequent meet to see that showdown along with the 11 and 10 seconds class. (Calvin Chapman)

Welcome to the Original Guyanese Discussion Forums, first established in 1996. Here you can discuss, ask questions or generally debate anything related to politics, movies, music, health or just gyaff away your day/night here. A note of warning, the Political forum is not for the faint of heart.  We do have some rules, so please adhere to them.
Join Now
Rowley: Govt doing all to protect against Coronavirus
Harvey Weinstein’s New York rape trial moves on after explosive testimony
‘We have to set this region free’ - -Granger pleads with Berbicians to break PPP/C stranglehold
Steep rise in oil reserve seen as upping pressure for revamping of Exxon deal
India sees great potential for cooperation on oil, other sectors – High Commissioner - -says any initiative that contributes to further indebtedness cannot be part of `development diplomacy’
Youth confesses to murdering No. 63 Beach hotelier, workman – police sources
Troy anticipates restart of full production at Karouni by end of February -CEO
NCN EiC sent on leave after altercation with Head of DPI
Current Visitors: 276 (15 members, 261 guests)

Like this of the Orange Orangutan, Nehru.
5 minutes ago

Re: Winston Jordan, Volda Lawrence, Nagamootoo and Guyana
6 minutes ago