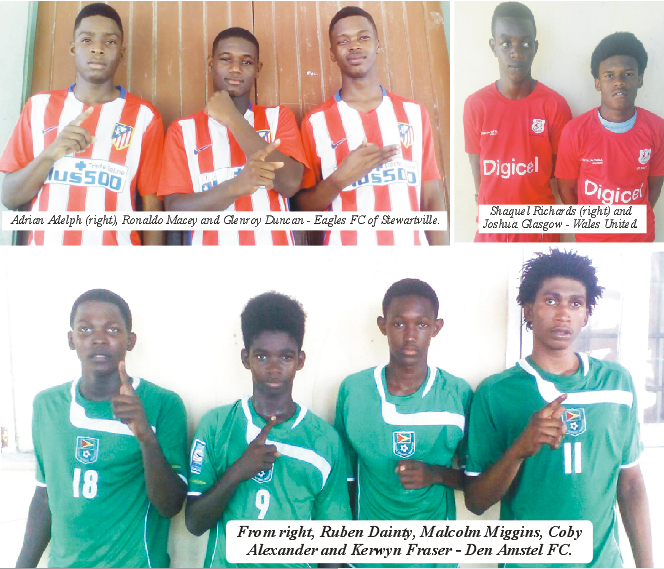 The Den Amstel ground, West Coast Demerara is the venue for two more matches in the GFF/NAMILCO Thunderbolt Flour Power National Under-17 Intra Association League in the West Demerara Football Association leg of the competition.
Wales United, smarting from their upset win over Uitvlugt Warriors will open play tomorrow against Crane Rovers from 09:00hrs with the final match between Pouderoyen and Golden Warriors from 11:00hrs.
In latest play which was contested on Sunday last at the same venue, Den Amstel, Wales United and Eagles FC of Stewartville notched wins against Pouderoyen, Uitvlugt Warriors and Crane Rovers, respectively.
Den Amstel handed Pouderoyen their first loss of the league thumping them 4-1 which now leaves Eagles as the lone team yet to taste defeat. Scoring for the home team which totally dominated proceedings after Pouderoyen took the lead on 18 minutes through Keanu Lawrence were Ruben Dainty in the 39th, Malcolm Miggins (48), Keswyn Fraser (52) and Coby Alexander in the 68th minute.
The upset of the day was the Wales United 2-0 win over Uitvlugt Warriors which have not been playing to their potential since the start of the second round.
The boys from Wales, who seem to be getting better with each game, scored in the third minute through Joshua Glasgow with the sealer coming off the boot of Shaquel Richards in the 38th minute.
Eagles FC continue to soar to higher heights with yet another win to maintain their unblemished record. They drove past Crane Rovers 3-0 on account of goals from Adrian Adelph (21), Ronaldo Macey (37) and Glenroy Duncan, five minutes into the second half.
Eagles never allowed the Rovers to get any way close to their defensive third.
Apart from tomorrow’s double header, two more matches would be played on Sunday at the tournament venue. Eagles will be in action again against Jetty Gunners from 09:00hrs followed by a clash between Den Amstel and Uitvlugt Warriors.

Totaram replied:
Read the article on Jonas' lawsuit and then join the conversation. He is/was arguing that the president doesn't have the authority to...
$34M per month for Giftland to supply electricity to national grid
12 minutes ago