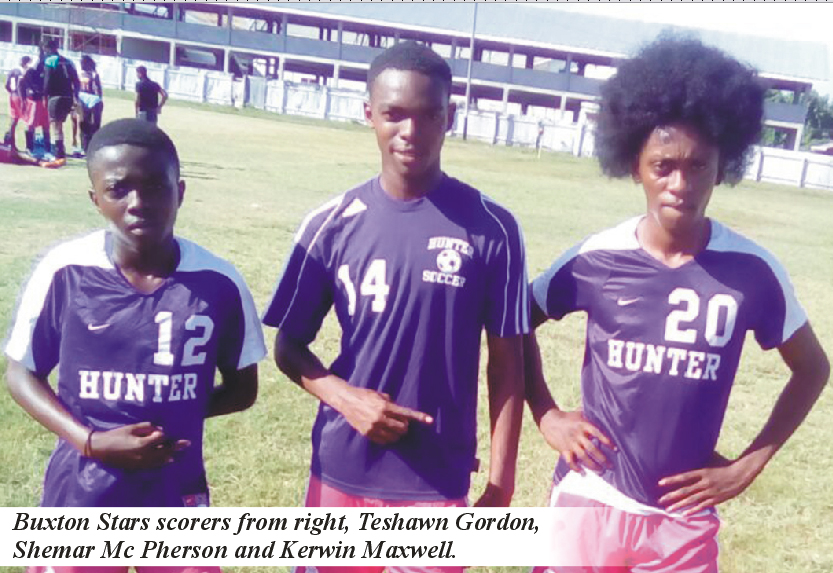 Captain Kobe Durant led from the front as Buxton United decimated Bachelors Adventure Paradise Sports Club 10-0 in one of two matches contested on the weekend in the East Demerara FA leg GFF/NAMILCO Thunderbolt Flour Power National Under-17 Intra Association League at the Golden Grove Community ground.
The other match which featured the stars, Buxton Stars and Golden Stars saw the former shining brighter than the latter in a 3-1 win.
Durant, the leading goal scorer in the league continued to impose his will on opposing teams by blasting another hat-trick of goals as his team continued their impressive undefeated run of form.
He {Durant}sent his team on their way to victory with goals in the 2nd, 25th and 39th minutes and got excellent support from the trio of Colin Henriques (8, 23), Jamar Robertson (10,80) and Isaiah Anderson (17, 34) with a brace each.
Maleki Grannum netted the other goal for the winners in the 70th minute.
A goal each from Teshawn Gordon in the 20th, Kerwin Maxwell in the 60th and Shemar McPherson ten minutes later piloted Buxton Stars to their win over Golden Stars whose consolation strike came off the boot of Joel Marks in the 50th minute.
Matches will continue tomorrow at the same venue with a triple header. Plaisance will take on Ann’s Grove from 11:00hrs with Golden Stars opposing BV Triumph United from 13:00hrs with the feature match pitting Mahaica Determinators and Buxton United from 15:00hrs.