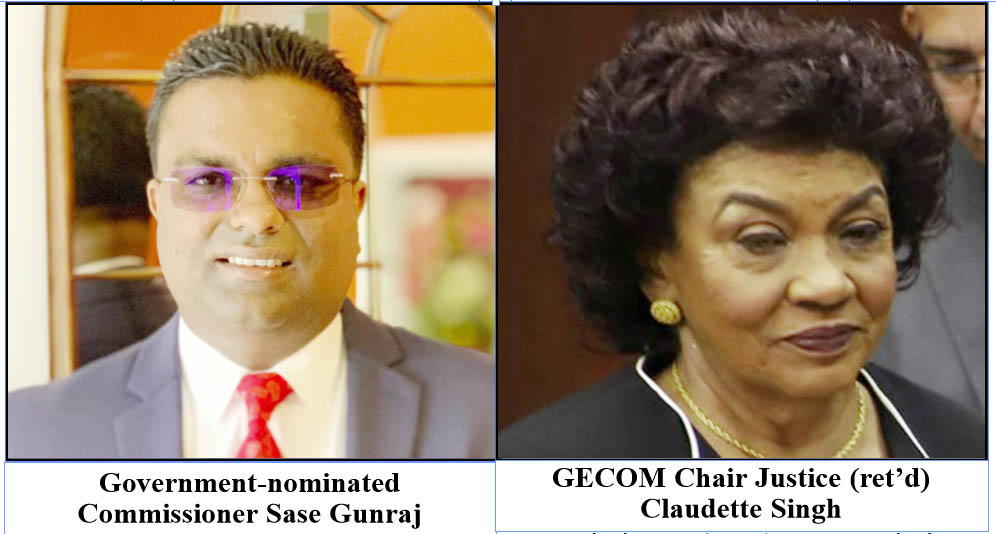 Chairperson of the Guyana Elections Commission (GECOM), retired Justice Claudette Singh SC is expected to present an integrated list of shortlisted candidates for the seven advertised positions, to the Commissioners by tomorrow.

This information was disclosed by both government-nominated and opposition-nominated Commissioners Sase Gunraj and Vincent Alexander respectively. The duo relayed the information following GECOM’s statutory meeting yesterday.

GECOM is currently shortlisting applicants to fill the posts of Chief Election Officer (CEO), Deputy CEO, Assistant CEO, Chief Accountant, Legal Officer, Logistics Manager, Civic and Voter Education Manager. Thus far, both sides have submitted shortlists for the various posts but dominating the discussions are the appointments of the CEO and DCEO.

Following yesterday’s meeting, Alexander told Stabroek News that after the Chair submits the integrated list then they would have to scrutinize it.

“It is now expected that the chairperson will give us an integrated list by next Thursday so by next week we can proceed to finalise the list and start with the question of a schedule for interviews. Now that these shortlists have been submitted we should collectively look at the shortlists against the criteria to determine whether they meet the criteria and to use it as a basis for finalising the final shortlist and we can’t just take people’s submissions at face value,” Alexander explained.

Based on the criteria, the CEO is required to be the holder of a Master’s Degree and have 10 years of experience in electoral matters. The CEO would be responsible for advising the Commission on policy matters and their implementation; the interpretation of relevant legislation, and reports on their applications among a plethora of other responsibilities required for the day-to-day functioning of the Secretariat among other responsibilities.

Speaking to the allegations of stalling the process, Alexander said that he and his fellow Opposition-nominated Commissioners are insistent on weeding out unqualified applicants from the shortlists and proceeding to interview those that stand a chance to be hired.

He accused the government-nominated Commissioners of pushing to have everyone they listed interviewed even when the requirements are not met.

Based on those shortlisted for CEO, Jamaican Harrow and Kittitian Petty hold significant experience in electoral matters. Harrow has held a number of positions within the Electoral Commission of Jamaica (ECJ) and is said to have over 25 years of experience working in the field of administration and governance. Harrow spent over 18 of those years with the ECJ.

Petty is a seasoned electoral observer and former Elections Supervisor in St Kitts. He led the Organization of American States (OAS) observer mission to the 2006 General and Regional Elections in Guyana. Petty also served as Director of the CARIFORUM Directorate.

Texan Dr Kurt Clarke is said to be an attorney but very little has been released about his qualifications.

On the local end, Deodat Persaud has been employed with GECOM for over 16 years and currently serves as an Assistant Registration Officer. He was also a Commissioner on the Ethnic Relations Commission. Meanwhile, Vishnu Persaud became a GECOM employee in 2001 and served as Public Relations Officer (PRO) for almost 13 years. He also served as DCEO.

Giddings on the other hand does not meet the experience criteria since he only became an employee in the elections arena in July 2018. He serves as the Commission’s Information Technology Manager.

During an appearance on Chartered Accountant Christopher Ram’s show “Plain Talk”, Alexander said because of the fractured nature of GECOM, they have been unable to agree to a full process for the appointment of the Officers. He referred to the proposal for an independent panel to screen the shortlisted applicants and make recommendations to the Commission while adding that it was shot down on the grounds of appointments being a constitutional mandate of the Commissioners.

“There are some (Commissioners) who argue that they have a constitutional responsibility that they do not intend to delegate and my argument is they don’t understand delegation because when you delegate you are still responsible and secondly in the process the expert team will make a recommendation and the Commission makes the appointment.

“One wonders what informs people who say that they do not want expert involvement simply because they have a constitutional responsibility that they do not want to give to anyone, which is not a requirement of delegation and therefore it is a bad reflection of their understanding of the law,” the Commissioner posited.

He added that the non-finalisation of a process to conclude the appointments is also one that brings about a lot of unnecessary issues.

“What is happening at GECOM right now is an evolving process. We haven’t started this process (of hiring) determining all that will be done to the end. We are incrementally making a determination as we go ahead,” he said.

Sign In To Reply
Post
Current Visitors: 20 (1 member, 19 guests)
Welcome to the Original Guyanese Discussion Forums, first established in 1996. Here you can discuss, ask questions or generally debate anything related to politics, movies, music, health or just gyaff away your day/night here. A note of warning, the Political forum is not for the faint of heart.  We do have some rules, so please adhere to them .
Do not post any messages that are obscene, vulgar, sexually-orientated, racist, hateful, threatening, or that otherwise violate any laws. Do not post any messages that harass, insult (name calling), belittle, threaten or mock other members.
Do not use profanity, racial, ethnic, religious, or other slurs and stereotypes, or post sexually-oriented material, masturbatory and excretory references, or any other offensive material.

Lawless in the land.
25 minutes ago