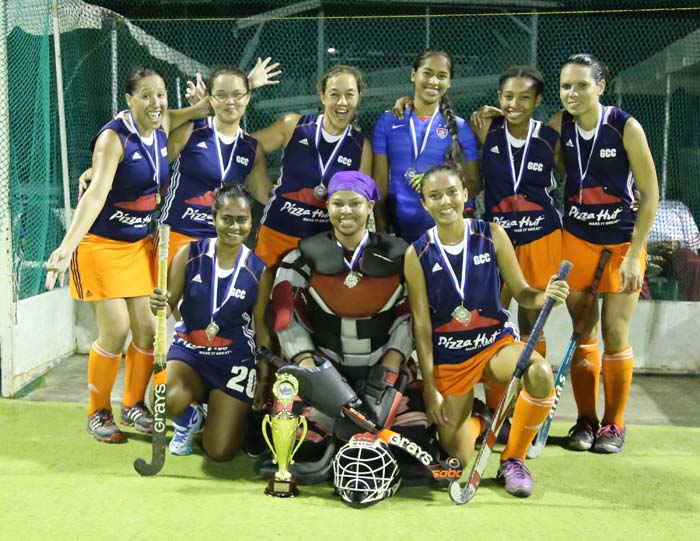 The Old Fort Hockey Club which has been going through a rebuilding process, showed signs of a promising future after copping the Men’s Open and Boys Under-17 titles on Sunday, the final day of the GCC/Igloo Hockey Festival.
The two-day competition which was competed at the Georgetown Cricket Club miniature turf saw Old Fort competing in three male finals, the Under-17, Open and Under-21 division which they lost to GCC.
The host club GCC which has the most extensive youth programme from Under-10 upwards, won 6 of the 9 categories contested, Old Fort won two while Saints HC took one victory. Saints Hockey Club put in their most impressive performance to date as the young club secured the top spot in the Under-14 boys division and made appearances in 3 of the 9 finals.
Old Fort Damn displayed an impressive performance of hockey to win their first Open men’s division title in some time while the Pizza Hut GCC ladies continue to be the dominant team in the women’s division.
Old Fort Damn then dispatched the mighty Pepsi Hikers 6 – 5, spearheaded with three goals from striker John Abrams in their semi-final clash; entered as favourites for the Men’s Open division title against Saints HC. Saints had edged indoor champions Bounty GCC in a penalty shootout in their semifinal match.
Old Fort defeated Saints 6-3 in the Open final. It took Old Fort’s Ascofu Simon 5 minutes to score his first of a hat-trick, supported with two field goals each from Jason DeSantos and Jason Clarke along with a penalty from John Abrams to carry Old Fort to a final tally of six goals. National midfielder Hilton Chester who proved to be one of the best penalty takers on Sunday, made a valiant effort to keep his side in contention with two penalty conversions. Despite the exploits of the diminutive Chester and a field goal by teammate Kwesi Lewis, the young Saints team couldn’t deny Old Fort the 6-3 victory and the men’s Open title match.

The women’s Open final got off to a promising start with just a minute into play when underdogs, Woodpecker Hikers received a penalty against favourites Pizza Hut GCC. GCC’s Goalkeeper Briawna Gordon ensured that her side didn’t concede from the penalty and the eventual champions slowly tightened their grip as the match progressed.
A hat-trick from national midfielder Trisha Woodroffe and a solitary strike from Sandy Roopnarine placed the game beyond the reach of the Hikers in the 4-1 result. Hikers’ midfielder Latacia Chung scored their lone goal through a penalty rebound. GCC Spartans’ Abosaide Cadogan ended as the highest female scorer with 21 goals. 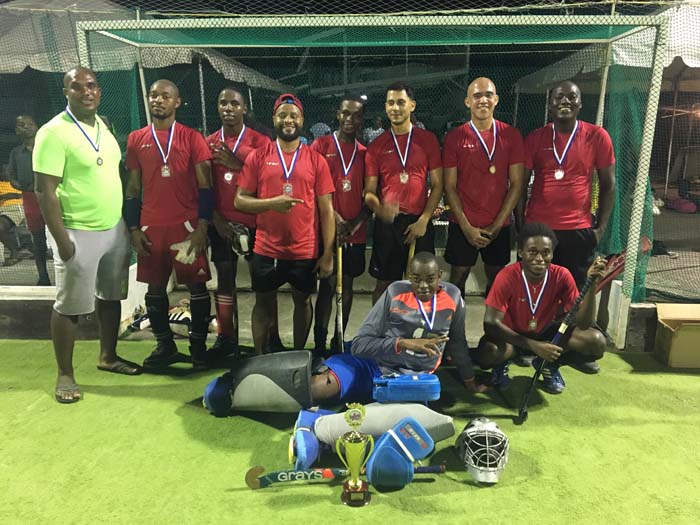 Welcome to the Original Guyanese Discussion Forums, first established in 1996. Here you can discuss, ask questions or generally debate anything related to politics, movies, music, health or just gyaff away your day/night here. A note of warning, the Political forum is not for the faint of heart.  We do have some rules, so please adhere to them.
Join Now
Jamaican Reggae Boyz striker Mattocks faces felony charges in US
Jamaica: Wounded 5-year-old runs to get help after gunmen kill mom
Arson suspected in destruction of Sachi building
Political consensus key to preventing abuse of extractive industries by foreigners - -Moray House Trust event hears
Re-migrant Guyanese dies after De Kinderen accident
Security guard charged with raping 14-year-old ‘girlfriend’
Newspaper vendor attacked, robbed of motorcycle in Meadowbrook
Teen killed in Farm hit-and-run
Current Visitors: 147 (15 members, 132 guests)

Bai DG, this is very distracting as I try to play bookkeeper heah. 😀
1 minute ago

Banna look at the facts , it will be revealed.
6 minutes ago

He said she said, show the evidence.
6 minutes ago
Not only my views ,there are others whom have said the same.
9 minutes ago

Massive reduction of polling places by GECOM-- VOTER SUPPRESSION.
6 minutes ago
Venomous creatures coming ashore at Georgetown seawall--- Cain has something to do with these creatures.
11 minutes ago
Berbice police arrest ‘AK-47’ gang on way to robbery – guns, ammo, masks seized
21 minutes ago
Guyana Times story Ray
23 minutes ago