Despite having to dole out millions of dollars recently to reconstruct his Sports Store and Fitness Gym due to faulty construction, overseas based former national cyclist Wilbert Benjamin is still doing more for others.
The kind hearted Berbician still has the heart to continue to share his benevolence with his fellow countrymen and those in need in a massive way. 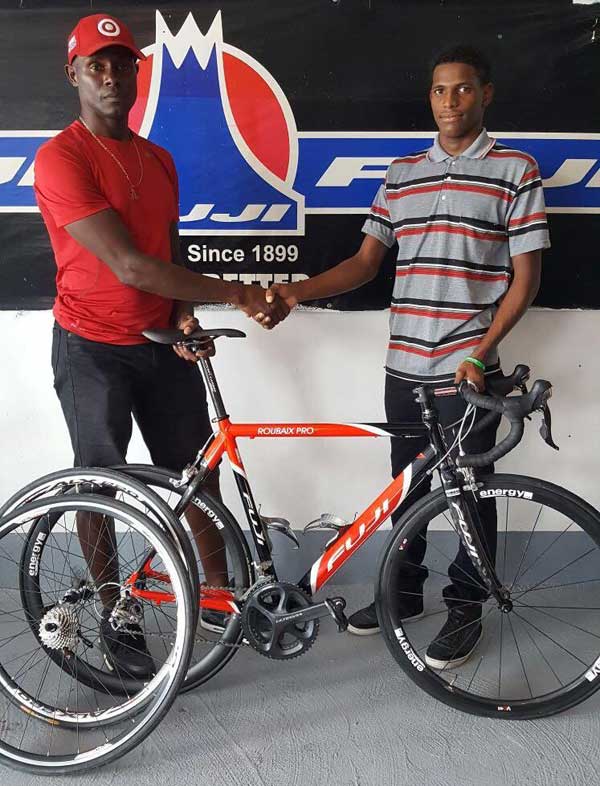 Benjamin, who represented Guyana at both the junior and senior level, on Saturday last presented a brand new Fuji Carbon Fibre Road Bike to up and coming cyclist Curtis ‘Chappy’ Dey.
The presentation was done at the Benjamin Sports Store and Fitness Gym and Car Wash located at Lot 220 Courtland Village Corentyne Berbice. The donation is worth over $600,000.
Along with the bike Benjamin also donated two Carbon Fibre Wheels as extras.
Dey, who hails from the Fyrish Corentyne area, is a former junior champion and has represented Guyana at the junior level.
Since the start of the year he has been in good form and among the top riders around.
In handing over the bicycle along with the wheels Benjamin stated that it is the second bike they are giving to the young cyclist. He said that they had presented Dey his first bike in 2012.
Benjamin, who also hails from the Fyrish area, still rides both at home and overseas. He said that he has seen Dey ride recently and noted his good performance. He also noted that the bike Dey was using was old and not good. It was also not giving the young man justice, since it would give endless mechanical problems and puncture regularly.
Benjamin said he knows where he came from and would do his best to assist those with the potential and are disciplined enough to do well and go forward.  (Samuel Whyte)

Sign In To Reply
Post
Current Visitors: 26 (6 members, 20 guests)
Welcome to the Original Guyanese Discussion Forums, first established in 1996. Here you can discuss, ask questions or generally debate anything related to politics, movies, music, health or just gyaff away your day/night here. A note of warning, the Political forum is not for the faint of heart.  We do have some rules, so please adhere to them .
Do not post any messages that are obscene, vulgar, sexually-orientated, racist, hateful, threatening, or that otherwise violate any laws. Do not post any messages that harass, insult (name calling), belittle, threaten or mock other members.

Gas to shore project and Mr Patterson
10 minutes ago

Black leaders in the PPP/C are serious threat to black rights, black empowerment
21 minutes ago