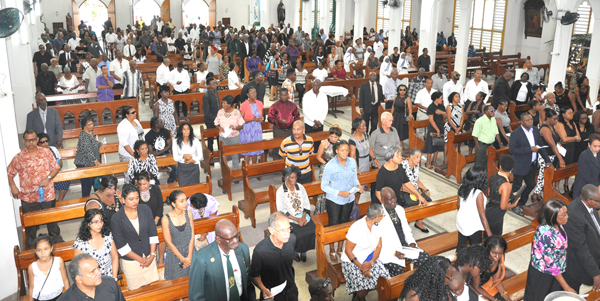 An overhead view of persons that filled the pews of the Brickdam Cathedral yesterday during the Home Going Service for the late Winston ‘George’ Humphrey.

A packed Brickdam Cathedral – Church of the Immaculate Conception which included Ministers of Legal Affairs/Attorney General and Public Health, Basil Williams and Volda Lawrence along with members of the business community bid farewell to the late Winston ‘George’ Humphrey, former Guyana Cycling Federation (GCF) President and Baker by Profession.
Guyanese from all walks of life including numerous professionals turned out to pay their last respects to a son of the soil whose benevolence and love impacted the lives of thousands during the 69 years he walked this earth.
Born on March 1st, 1948, Humphrey rode his final lap in the race of life on December 17th last.
Father Terrence Montrose, who delivered the homily, recalled that he grew up with Humphrey who was a devoted and dedicated Christian. The founder of Roraima Bikers Club (RBC) was eulogized by two of his granddaughters, Abigale and Tiffany Humphrey who recalled their grandfather attended West Ruimveldt Primary school but had to leave school to take care of the bakery following the death of his father.
Despite not being able to obtain a secondary education, the committed Humphrey developed into one of the most respected baker and business entrepreneurs Guyana has produced. This fact was earlier emphasized during the respective tributes of Ministers Williams, Lawrence and National Milling Company of Guyana (NAMILCO) Marketing Consultant, Hafeeze Khan.
The father of eight (8) children and twenty (20) grand-children was saluted as an exceptional individual who possessed an excellent business acumen by Minister Williams who also described him as a community leader and philanthropist while noting that he {Humphrey} has secured his footprints in the sands of Guyana.
Minister Lawrence who stated that to her; Humphrey was a father and brother in Christ, described him as a culturalist and invaluable member of society. Minister Lawrence opined that the baking-industry would have suffered a huge loss with his passing.

She noted that his benevolence transcended all boundaries stating that he epitomized kindness as he exhibited consistently, qualities of kindness, love and unity summing up that he was a baker extraordinaire and exceptional Guyanese.
In his tribute on behalf of NAMILCO, Khan said that Humphrey came into the baking-industry since 1930 and has been a loyal customer of NAMILCO all through the years. He informed that ‘George’ as he fondly refereed to also made a huge impact in the world of sports by assisting numerous sporting bodies consistently.
Khan recalled that apart from the Rotary, the disciplines of football, cycling, boxing and athletics among others all benefitted from the kindness of Humphrey who also assisted numerous orphanages and poor homes and was a tower of help to hundreds of residents of the Charlestown and Albouystown areas over the years.
Prior to the home going service, Tributes were also done at the Humphrey’s Bakery & Farm Products where hundreds paid their final respects and shared touching experiences they had with a man who also provided jobs for many even when his bakery did not necessarily need to employ anyone.
He was more interested in ensuring that persons had the ability to earn and take care of their families. Among those attending the view at the bakery was Minister of Citizenship Ministry of the Presidency, Winston Felix.
The remains of the late Winston ‘George’ Humphrey was interred at the Le Repentir Cemetery yesterday afternoon.

Spiritual Shortsightedness Luke 12:13-21 Myopia, or nearsightedness, is a condition in which the eye cannot focus on distant objects.
8 hours ago

Yes i did attend Sunday school at one time at a very young age. But i have no memory of ever been told that. Reading the Bible, to be...
1 day ago

Did you not mention a while back that you attended Sunday school? I would assume you also read the Bible. Mary, the mother of the Lord...
1 day ago

Salvation Gifts 1 Peter 1:3-5 Gifts are an expression of love, yet sometimes we take them for granted. This is certainly true when it...
1 day ago

I wonder is who Mary blame dem on like how she and the angels blame Jesu on God...Yeh God is the father
2 days ago

Another Mingo playing BINGO with de police wuk
50 minutes ago

WHAT WE SHOULD THANK MR.GRANGER FOR
3 hours ago