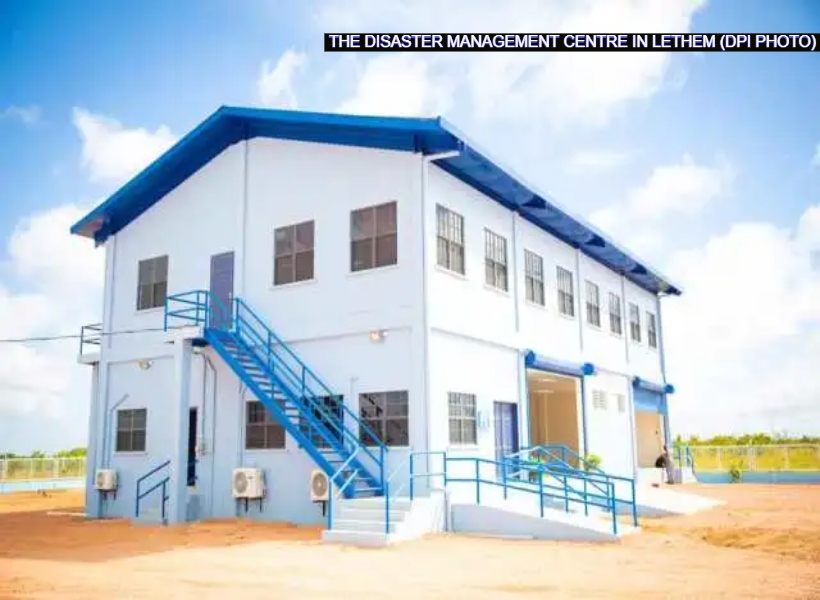 Region Nine is now prepared to handle natural disasters such as droughts and floods, following the commissioning of a Regional Disaster Management Centre. The $96 million centre was commissioned by Prime Minister, Brigadier (Ret’d) Mark Phillips in Lethem on Friday.

Prime Minister Phillips said the establishment of the centre is a significant milestone in the country’s disaster risk reduction, and is the first of its kind in the country. The centre will not only bring relief to the people of the region, but will also enhance its capacity to face and react to the perils that come with disasters.

He said countries worldwide are experiencing the impacts of climate change. According to him, Guyana’s risk landscape is diverse due to its unique geographical location and transborder hazardous threat. Region Nine, he noted, is susceptible to droughts, floods and other disasters, as he made reference to the recent floods and 5.7 and 4.7 earthquakes of the South Rupununi.

“These events must be treated as stronger warnings signals triggered by climate change and we must adopt a more proactive approach and implement mitigative measures to reduce disaster impacts.

In all cases, the onus is on governments, and I am talking about government on all levels, central, regional and municipal level, to intervene during a disaster to bring relief to the people affected,” the Prime Minister stated.

Prime Minister Phillips said once effective measures are in place to deal with disasters, the effects could be reduced or prevented through preparedness, early warnings and early response. He said the centre will ensure that Region Nine can fend against disasters, serve as a shelter, a warehouse for disaster relief foods, and a disaster management conference area.

The Prime Minister said it is critical that municipalities countrywide develop a disaster management plan even as government strengthens the regional disaster management system. He noted that proactive approaches must be enacted to address droughts, floods, and other hazards.

“Currently, the national multi-hazard early warning system is being enhanced. This system will access the risk of localities like Region Nine, like Lethem, and determine the type of hazard, vulnerability, and risks. The early warning mechanism is designed to ensure that disaster management is integrated at the regional level among all stakeholders, inclusive of central government, civil society, private sector and community-based organisations,” he said.

“The region will soon benefit from support by establishing community-based risk management systems in Katoonarib and Sawariwau… We will also be implementing community-based early warning systems in Lethem. Other plans for the regions include the establishment and training of damage assessment and needs analysis team,” the Director-General said.

Sign In To Reply
Post
Current Visitors: 33 (6 members, 27 guests)
Welcome to the Original Guyanese Discussion Forums, first established in 1996. Here you can discuss, ask questions or generally debate anything related to politics, movies, music, health or just gyaff away your day/night here. A note of warning, the Political forum is not for the faint of heart.  We do have some rules, so please adhere to them .
Do not post any messages that are obscene, vulgar, sexually-orientated, racist, hateful, threatening, or that otherwise violate any laws. Do not post any messages that harass, insult (name calling), belittle, threaten or mock other members.
Do not use profanity, racial, ethnic, religious, or other slurs and stereotypes, or post sexually-oriented material, masturbatory and excretory references, or any other offensive material.

Join Now
Wildflower replied:
Hey Siggy, Watched it…3 hrs! I am a bit confused by the end.
cain replied:
If these guys would stop the frigen waste of time suing..countersuing each other over frivolous bullshit maybe..just maybe the...

Mitwah replied:
Re: Songs in memory of Dara ( Khaleel Mohamed)