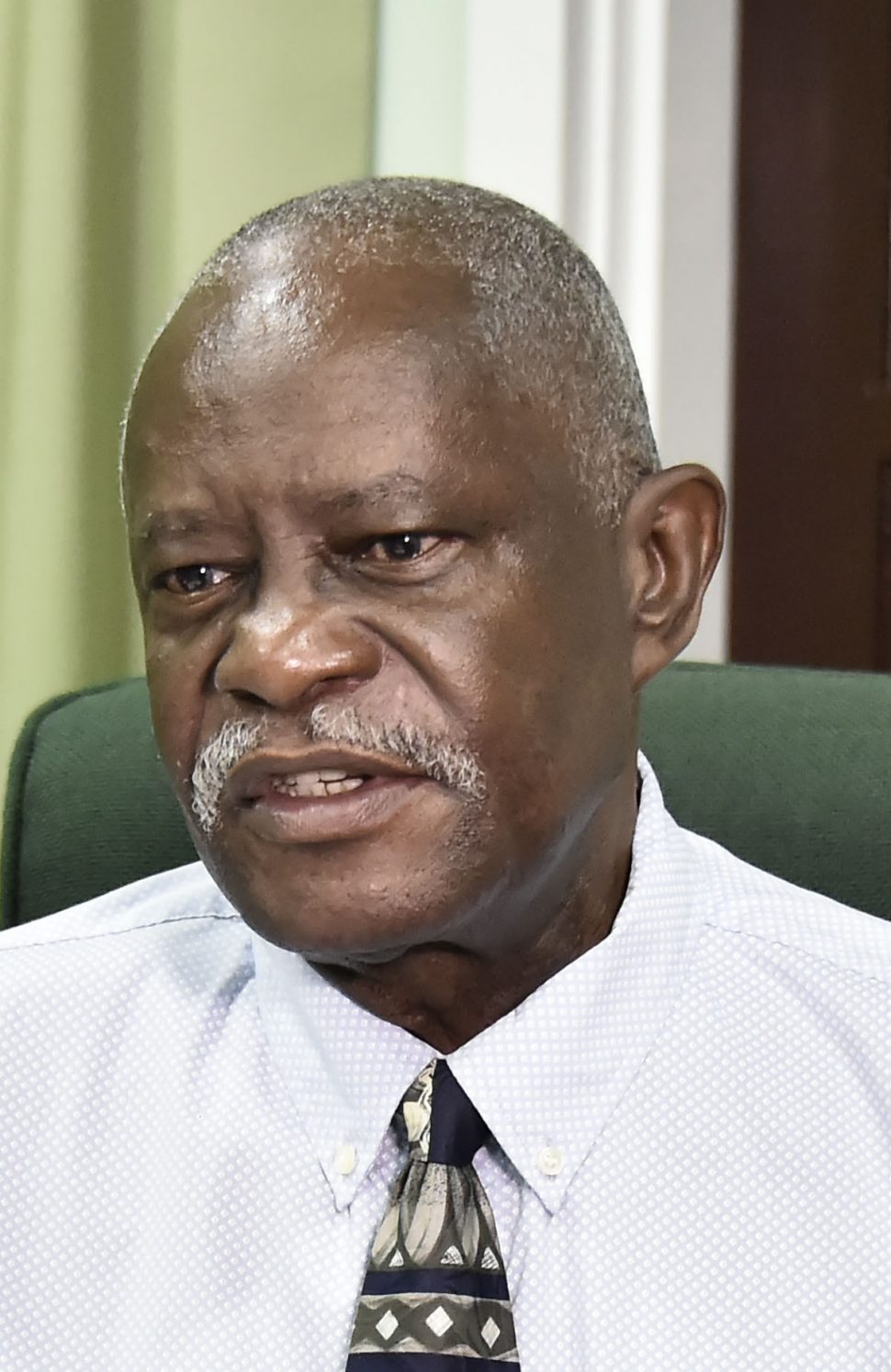 Under pressure over the last year to account for hundreds of Haitians who have arrived in this country but did not leave legally, Minister of Citizenship Winston Felix yesterday said that the police have found no evidence of people smuggling and he called recent reportage on this matter “xenophobic”.

In an interview with the press unit of the Ministry of the Presidency (MoTP) released last night , Felix condemned as inaccurate and deceptive, information published in both the Kaieteur News and Guyana Times on the arrival and departure of Haitian travellers to Guyana.

The articles , he said, have alleged that Haitians are being smuggled, are victims of Trafficking in Persons (TIP) and that there are levels of collusion to have the Haitians registered to vote at the upcoming General and Regional Elections (GRE). “These are xenophobic”, Felix said in the MoTP interview.

Felix said it is clear that there is a “sinister agenda afoot”, aimed at using the arrival of Haitians in Guyana for political mileage through falsified information to sow seeds of discord among Guyanese.

Felix said the numbers which have been published in the media are wholly inaccurate and misleading.

He said that the Kaieteur News reported on August 1, 2019 under the headline, “Out of 8,600 Haitians, only 13 left Guyana legally – Guyana is being used as stepping stone – Minister Felix,” that 8,602 Haitians arrived in Guyana between January 2019 and July 2019 and only 13 have departed. These numbers are false, the Minister said.

Instead, he said, during the same period, 8,476 Haitians arrived in Guyana and 1,170 departed the country. Forty-eight were refused leave to enter on landing, he added.

“No one would deny that Haitians are one of the higher numbers arriving in Guyana from around the Caribbean, but the records produced by  [the two media entities] are grossly incorrect and cannot be trusted to guide the public as to what is really taking place,” Felix said.

Records from the Department, the MoTP interview said,  show that in

In 2019, Felix said in the interview that there was a legislative adjustment to Schedule II of the Immigration Act, Cap. 14:02, to include Haiti as a beneficiary to the Caribbean Single Market Economy (CSME), which facilitates free movement within the Region and automatic entry and stay of six months in CARICOM countries.

Prior to the amendment, the Act had facilitated the six months automatic stay to other CARICOM member states including Antigua and Barbuda, Barbados, The Bahamas, Montserrat, Grenada, Jamaica, Suriname, Trinidad and Tobago with the exception of Haiti, whose nationals had required a visa and were only permitted to stay for up to 90 days or three months.

Since then, Felix in the MoTP interview noted that Haitians no longer need a visa to travel to Guyana and are afforded the same treatment and welcome that other CARICOM nationals have enjoyed.

“Firstly, travel was restricted to only those who were granted a visa. This was the case up to 2017. Since then, we have had the CSME regime adjusted to accommodate Haitians into that scheme. As a consequence, Haitians are treated like any other CARICOM national. The benefits of the CSME are available for every CARICOM national and that includes Haitians. A Haitian arriving in Guyana, just like any other Caribbean country is entitled to be landed for six months and is processed the same way; on a case by case basis,” he said, according to MoTP.

Further,  Felix said that Haitians have capitalised on free movement within the Region to travel to Guyana and other states.  “I know in some instances; the Haitians have walked over mountains to the Dominican Republic to catch flights to Central and South America using whatever airlines are available. This, along with the relaxation of the visa requirement, has allowed for freer movement of Haitians around the Region. Many of the news outlets have been making heavy weather of the Haitians who cannot be accounted for. We have large and unprotected borders on the East with Suriname, on the West with Venezuela and on the South with Brazil. It is very easy to travel from certain parts of the Rupununi to Brazil because of the porous borders. For Suriname, there is the decades old back track, which the Haitians utilise to travel across and then onward to Cayenne,” he said.

Yet, the Minister said that no concerns have been raised about these other nationalities. As such, he said, the media attacks and the rhetoric from the two media houses against the Haitians are nothing short of xenophobic and should be condemned by all Guyanese.

“This position resembles xenophobia and is even practised by certain people in power. I cannot see why a CARICOM state, which has now gotten CSME status can be so vilified for passing through Guyana. They are just passing through and yet they are attracting all the negative thoughts and actions of people who are seeking power.

We have 8,476 Haitians arriving in Guyana but for example, we have 11,119 Trinidadians also arriving for the same period and no one is making a noise about that but everyone is making noise about the Haitians who simply use Guyana as a point of transit to get to their diaspora in Columbia, Cayenne or Panama,” the Minister said.

While the minister said the Haitians are passing through, it has been noted that they are not leaving legally but likely illegally through Suriname headed to French Guiana or to Brazil via Lethem. Any country that enables such movement without attempting to restrain would be seen as abetting the movement and would likely attract the ire of the receiving country. The Sunday Stabroek of June 30, 2019 had reported on what was an elaborate plan to transport Haitians to Brazil. Along, the way, police reportedly collected bribes and it was clear that accommodation and transport had been organized to facilitate the movement of the Haitians. These would all be signs of people smuggling, sources say.

In the MoTP interview, Felix also said that the Guyana Police Force has made checks and to date, has found no evidence to indicate even a single instance of people smuggling or Trafficking in Persons (TIP), relative to the Haitians. He said, the Force, since 2014 has not found a single case of Haitians being victims of either of the alleged crimes.

“In effect, the Department has been working with the Police on each report of trafficking in persons and this has been so since 2015. For 2019, the Police encountered 18 cases of TIP, 13 persons were charged and 7 cases were brought before the Courts. The Police, who have been working on TIP since 2014 has never encountered a Haitian who is victim of TIP and similarly, they have not charged any Haitian with relation to TIP and that is instructive as to the nature of the Haitians presence in Guyana. They are not victims of trafficking nor have we encountered them smuggled into any territory or Guyana,” the Minister noted.

In 2018, Felix and then Minister of Foreign Affairs Carl Greenidge had been summoned to appear before the Parliamentary Committee on Foreign Relations to explain why there was no record of hundreds of Cubans, Haitians and others having left the country.

Yesterday, Felix  encouraged members of the public who have knowledge of smuggling or human trafficking  being committed, to report it to the police.

“People must stop trying to ensnare officials of the Government with irregular acts of planning to register Haitians to vote in this country. I am inviting the public at large to come forward and make reports if you have any information on any Haitian being smuggled or a victim of TIP or anyone perpetrating that offence. Please feel free to report to the Police,” Felix urged.

Felix is a friggin’ bold face Liar!!  They cooking the books!!

Isn't Winston Felix the one who said that the gruesome killings of the Sawh family was just a regular crime?

Felix think that people are stupid to report these occurrences to the Police. The Police may have already been given instructions to forward the names of the snitches to PNC HQ. The people are afraid because they themselves would be targets of the PNC and their thugs.

So Felix said that between January 2019 and July 2019, 8,476 Haitians arrived in Guyana and 1,170 departed the country. He also added that forty-eight were refused leave to enter on landing.

But he does want anyone to be concerned about the whereabouts of the 7.306 that his department seems to have no clue of.

That shouldn't anger you.

What should anger you is that Kaieteur News report on August 1, 2019 under the headline, “Out of 8,600 Haitians, only 13 left Guyana legally – Guyana is being used as stepping stone, that 8,602 Haitians arrived in Guyana between January 2019 and July 2019 and only 13 have departed is false (incorrect).

No wonder people think that the Coalition is the most hapless bunch of people ever assembled.

Tiefma nvevah seh dem tief. Felix is using his mouth for his battie.

Models for a better Guyana are out there but do we want to change?
11 minutes ago