There were some surprising and stunning performances recorded by Karatekas on Sunday last at the YMCA, Thomas Lands when the Association do Shotokan Karate – Guyana (ASK-G) held its 2018 National championships. 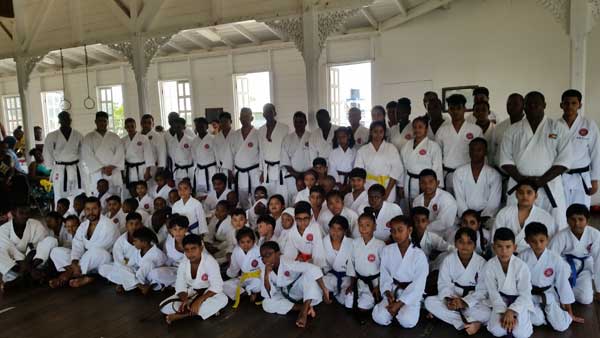 A release form the organization stated that Joel Kellman’s Empi Kata was excellent for a Brown Belt level despite not winning a medal. However, Two superb Kata performances by Roger Peroune stole the show.
Speed, timing and sharpness of technique mesmerised the judges and spectators earning him first place. Kellman, one of the future stars of the sport once again performed creditably in the Kumite, placing 3rd place amongst the Black belts.
However, Peroune eliminated his first opponent in very short time and the final match against seasoned veteran Keith Beaton saw him being victorious acquiring the coveted Kumite first place.
There were 40 categories, 20 in Kata and 20 in Kumite contested which showcased athletes in the 5-6, 7-8, 9-11,12-14 and 15-17 years old categories battling each other for supremacy.
The Female Katas were as strong as their Male counterparts earning Rebecca Wesley first place, while the Kumite saw two disqualifications due to excessive contact; Kristine Ramkissoon emerged victorious.
In the 15-17 males, strong performances from Trevon Miller and Charles Benjamin earned them first and second place respectively in the Kata division. The Kumite saw just as fiery combat as the adults resulting in Trevon Miller and Shemar Parkinson placing first and second.
Over 80 competitors drawn from the East Bank, East Coast, West Bank, West Coast and Georgetown, participated.
The officiating judges were Clinton Moriah, Bhagwandin Persaud, Roger Peroune, Keith Beaton, Mahadeo Ramotar, Malcolm Francis, Laurence Lowe, Patrick Gurahoo, Leonard Leuwassie and Rebecca Wesley.

Totaram replied:
Read the article on Jonas' lawsuit and then join the conversation. He is/was arguing that the president doesn't have the authority to...
$34M per month for Giftland to supply electricity to national grid
13 minutes ago