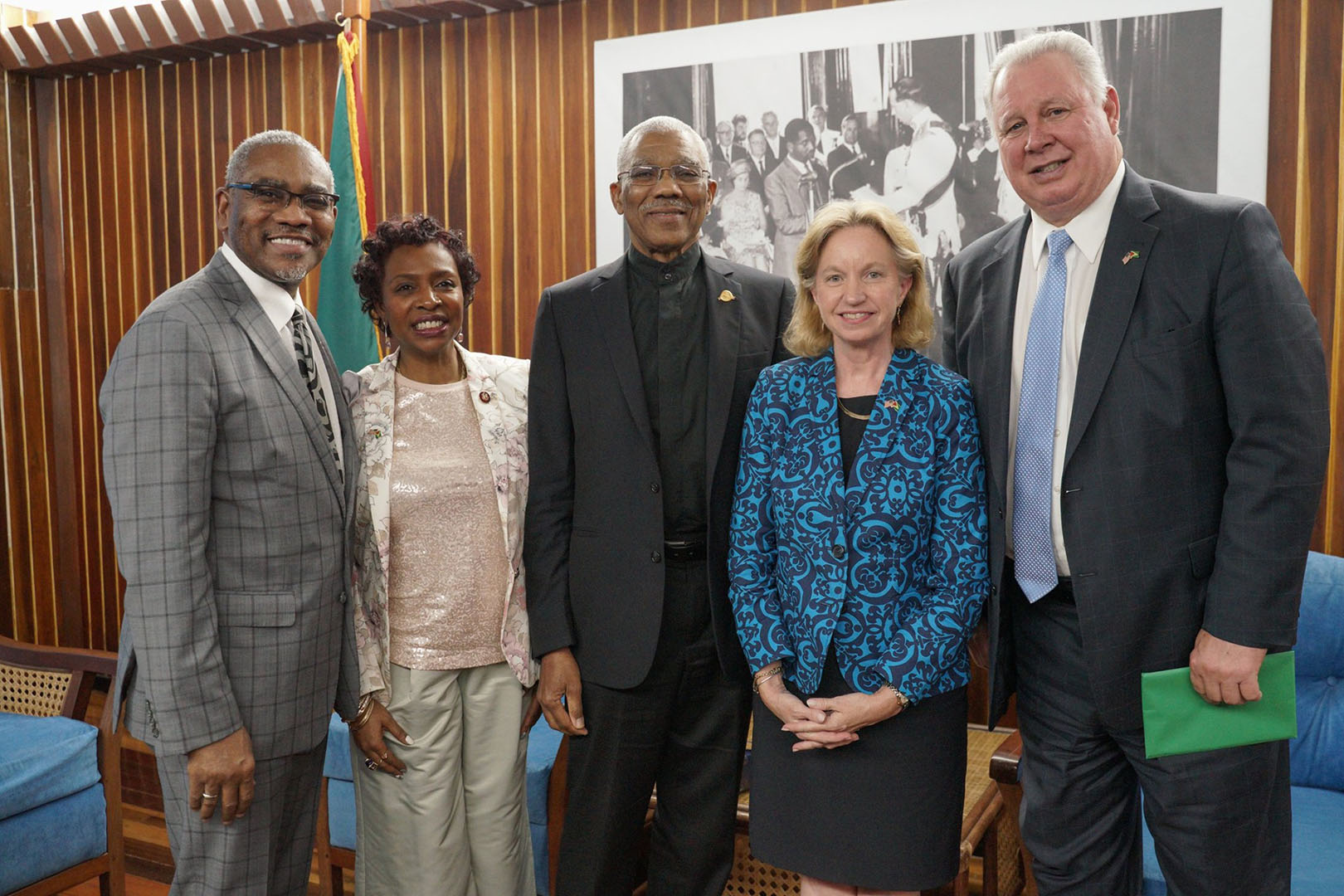 President David Granger yesterday met three members of the United States Congress at the Ministry of the Presidency and assured them that the March 2nd General and Regional elections will be free and fair. 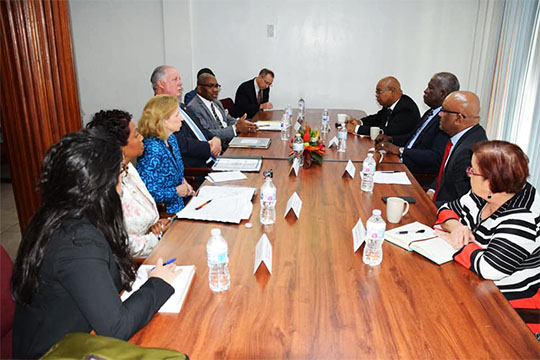 The meeting between the US congressional delegation (left) and the PPP/C which was held yesterday at Office of the Leader of the Opposition.

Analysts have questioned what the President has meant by his frequent reference to “credible” elections and if that couldn’t be a signal that the results of the election could be called into doubt.

“I was able to assure the US Congressional team that all the preparations that need to be made, are being made by the Elections Commission in accordance with the law and that the Executive Branch of Government has been compliant with the Constitution and, that we are working to ensure that the elections are indeed free and fair. We will continue to cooperate with the Elections Commission to do so,” President Granger said, according to the statement.

Granger, who is performing the functions of a caretaker President, said the Congressional team was told that there would be no disorder or lawlessness and that it could look forward to Guyana playing a key role in the Western Hemisphere.

The Congressmen and Congresswoman were accompanied by US Ambassador to Guyana,  Sarah-Ann Lynch.

People’s Progressive Party General Secretary, Bharrat Jagdeo also met the team and was elated, noting that the legislators underscored the need for free and fair polls.

“We are extremely happy that a congressional delegation is visiting this country, just on the eve of one of the biggest elections. Their single message to me, and I understand to other persons and organisations that they have met, is that the United States of America wants free, fair and peaceful elections in Guyana. They also want all parties to abide by the results and outcome of these elections,” Jagdeo told Stabroek News yesterday following the meeting, which was held at his Church Street, Georgetown office.

The New York and New Jersey areas are home to most Guyanese who migrate to the United States and are the key states that local politicians visit to campaign.

Jagdeo last month returned from New York where he was the keynote speaker at a party fundraising dinner held in Queens.

Guyanese living in these states have lobbied their congressional representatives to keep an eye on Guyana to ensure free and fair elections.

The Opposition Leader said that he and supporters are elated that US legislators are not only fact finding ahead of the polls but also because the US will be one of many other countries that will be observing the elections.

“There will also [be] a major international presence here during the elections as there will be observers from not only the US but other international organisations. We are pleased about that because it is assuring, given the past experiences with rigged elections in Guyana. It gives persons some reassurance and assuage those fears and that can go a very far way,” he said.

PPP/C Presidential candidate Irfaan Ali was unable to meet with the delegation as Jagdeo explained that he is currently in “in the regions working”.

The PSC later released a statement saying that the visit focused on fact finding ahead of the polls.

“The visit surrounds primarily the holding of national and regional elections in Guyana on March 2, 2020, to which end, the (legislators)  are on a fact-finding mission to Guyana with the view of ensuring that the elections are free and fair,” the short PSC statement read.

A statement from the Georgetown Chamber of Commerce and Industry also stressed the commitment to ensuring a free and fair elections process.

Yes.  But someone must be held accountable.  He have not made any statement on the matter.

The US and UK Ambassadors already don’t trust Soulja bai. Remember not to long ago they had to call on him to respect the constitution and honor the NCV. They are just doing their job and posing with the illegal squatters.

A stinking LYING Dictator words are worth as much as NYC Raw Sewage!!!

Joseph Harmon, the real and effective president, is calling the shots.

Welcome to the Original Guyanese Discussion Forums, first established in 1996. Here you can discuss, ask questions or generally debate anything related to politics, movies, music, health or just gyaff away your day/night here. A note of warning, the Political forum is not for the faint of heart.  We do have some rules, so please adhere to them.
Join Now
Trinidad racks up 73 murders for year; man gunned down in car
Superyacht Ice docks in Trinidad
Johnson ends drought with career-best hundred as Jaguars chase win
…Montserrat whipped 6-0 by Golden Jaguars - Golden start as..
Boxing extravaganza on today at National Gymnasium
Visit Guyana, a love story
Global Witness report could have been more effective if released after polls - -Chatham House expert
Contrasting wins for ToppXX, Winners Connection - —Mash Cup in Linden
Current Visitors: 116 (8 members, 108 guests)

The only research i do is on my sweet homan. I love to play connect the dots on her body. Sometimes i get my black marker and make more...
28 minutes ago

Naah bhai ,i man gud ,remember nothing goes with you, when the time comes.
43 minutes ago

Facing many hurdles.. nah .. when man wants to married multiple woman and hold on to them property what you expect.. nuff nuff hurdles
1 hour ago

Lewis is a racist jackass.
1 hour ago

After 20-plus years and a sordid record, what good can we expect from Jagdeo?
1 hour ago