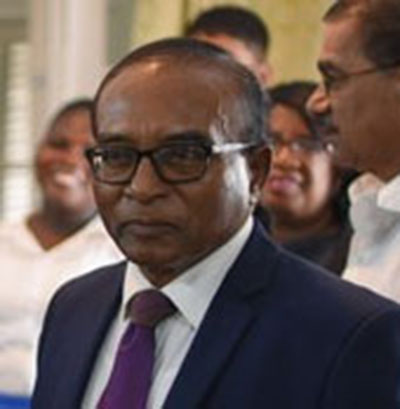 Chairman of the Integrity Commission, Kumar Doraisami on Friday told the Sunday Stabroek that he is prepared to launch an inquiry into allegations leveled against former Minister David Patterson over gifts but his tenure ends today.

He acknowledged receipt of an official complaint against Patterson from Minister of Public Works Juan Edghill.

Doraisami had told this newspaper last week he had forwarded a complaint form to Edghill. Though the Minister balked at the Commission’s request he complied.

Edghill has acknowledged receipt of the form which he said he will complete but he also took aim at the Commission stressing that a formal complaint is not necessary for action.

“I don’t need to fill up a complaint form for the Integrity Commission to investigate a matter which is in the public space” he said, adding that the Commission should have taken action from the first news report on the matter,

“It is in the news the Integrity Commission has investigators… If they had any sense of independence they would’ve pulled up Patterson’s declaration to see if he declared these gifts and call him in to ask about it. If they needed more information as it relates to the price of the gift then they could come to the Ministry for the vouchers which I am willing to provide,” he added.

The matter of gifts received by members of the previous administration including Patterson and his junior Minister Annette Ferguson was first made public through the release of documents from the Demerara Harbour Bridge Company and its Asphalt Plant. The documents show that two days before Patterson’s birthday in 2017, a total of $504,000 was approved for the purchase of a gold hand band and tie pin for him.

Patterson who first denied the allegation later acknowledged that he had received gifts from government agencies under his purview but he rejected any accusation of wrongdoing and said he assumed that the purchases were in compliance with procurement guidelines.

It was later reported that a preliminary review of other agencies covered by Patterson’s then ministry revealed numerous purchases for him and Ferguson.

Critics have claimed that this revelation calls into question the integrity of the former Minister and have lobbied for him to step aside as Chair of the Public Accounts Committee of Parliament which scrutinizes government spending.

They have also called on the Integrity Commission to act against Patterson since the Integrity Commission Act prescribes that a person in public office should not accept gifts given as a motive or reward for doing or forbearing to do anything in the performance of his official functions or causing any other person from doing or forbearing to do anything.

Specifically section 32 of the Act directs that within 30 days of receipt of any gift worth more than $10,000 the Commission shall be informed of the gift and donor.

The recipient is allowed to suggest but it is the Commission which will decide if the gift is a personal gift or a state gift.

If the gift is found to be either trivial or not an incentive, the individual is allowed to retain the gift.

The failure to report the gift is however according to the Act an offence for which the offender shall be liable, on summary conviction, to a fine, which shall not be less than the value of the gift involved in the commission of the offence, and to imprisonment for three months.

According to Doraisami the inquiry would include testimonies from both Patterson and Edghill and a likely request that the former Minister repay the sums spent from the public coffers.

“If he admits to receiving the gifts and failing to declare them we can have him pay the value of the gift to the Ministry of Finance but for now we cease to exist as a Commission [today],” he explained.

The current Commission led by Doraisami and including Commissioners Rabindranauth Persaud and Rosemary Benjamin-Noble was installed by President David Granger on February 21, 2018 for a three- year term.

The Act specifies that the Chairman shall be a person who is or who was, or who is qualified to be, appointed as, a Puisne Judge of the High Court or any other fit and proper person while the other members shall be appointed from among persons appearing to the President to be qualified as having had experience of, and shown capacity in, law, administration of justice, public administration, social service, finance or accountancy or any other discipline.

Both the PPC and the LGC expired in October 2020 and have not been reconstituted since while the JSC has not been re-appointed since its expiration on September 30th, 2017.

In the case of the PPC the members are approved by the National Assembly following nominations from the Public Accounts Committee. While current Chair of the PAC, Patterson had given a public commitment to make the nomination process a priority the Committee has not met in two weeks following an attempt by the government members to remove him as Chair.

Join Now
Totaram replied:
They can't even speak with one voice on this matter. What a bunch of jokers. This PPP government is an embarrassment.
Django replied:
Edghill says bodies boat found by Nicaragua likely the same one seen in Guyana’s waters March 4 ,2020 www.stabroeknews.com Minister of...

shallyv replied:
Only if you 'think' so, moron! What are you going to do about it?.Blow me? Sorry, I only let females do that to get things started!
shallyv replied:
The dots to which you object are not of my doing, guana! They are added by my harassing dimwit to make me stop and remove. I try to...
Boat with bodies found by Nicaragua not the same vessel spotted in Guyana’s waters – Benn
5 minutes ago