In rural Guyana where public sector employment opportunities may be limited, some young persons are getting involved in farming. Apparently, they find determining one’s working hours and income alluring features for choosing the profession. 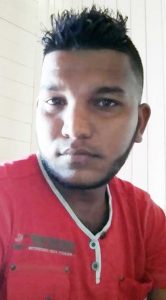 One young man who holds this view is Deochand Gangadin. He is a farmer from Hague Backdam, West Coast Demerara.“I like being a farmer. I find it as being independent, because you can go early in the morning, work a few hours then in the afternoon again. You don’t have to be up all day and study if you don’t work all day you wouldn’t get pay. Plus you are your own boss, you don’t have to answer to anyone,” Gangadin said.Gangadin’s interest in farming began as a child. After school and on weekends, he would assist his father on their farm. The lad was involved in every aspect of farm work- from land preparation to transporting produce to market. By the time he was a teenager, Gangadin had learnt practically every aspect of farming. However, the most important lesson he learnt was being one’s own boss.
At the age of 26, Gangadin manages a 10-acre farm located at Hague Backdam, West Coast Demerara. Utilising years of practical experience, he cultivates crops such as cabbage, peppers, plantains and ground provisions. In instances where he is faced with an unknown pest or disease, he relies on information from the National Agricultural Research and Extension Institute (NAREI) or a simple internet search.The young farmer tries to manage his operations like any other profit making business. He believes selling his own produce allows him to make a greater profit. As such, on Saturdays, Gangadin sells his produce at the Leonora Market.
“I also sell my crops to wholesalers and other farmers because I cannot bring out everything. We don’t have a proper farm to market road, so wholesalers come to the farm and buy. If the road was good I would have been able to bring out the produce at any time. Right now we fix up the road so I get to go in and out with motorbike,” he said.
Gangadin said that he and other farmers would benefit more financially if the farm to market road was in good condition throughout the year.He explained, “Right now the person who buys plenty cassava only paying $15 per pound, and it has other people who buy like two bags and so pay you up to $30 per pound, but to use boat with motor to carry out only two bags cassava for that customer won’t pay off. But if there was a good road those small customers should be able to come straight to the farm. “
He said that even with the minor challenges and sometimes hard labour, farming is a rewarding career. He believes that more young people should get into farming, especially those who want to control their own time and income. 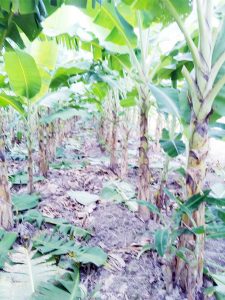 A section of Gangadin’s farm.

Even in winter, I have a greenhouse going in my basement. I do enjoy growing tropical plants in cold weather. It's a challenge.

Gangadin probably doesn’t know that the Dutch was cultivating crops in Hague backdam hundreds of years ago before the British even set foot on the land.  Django, as a successful businessman who knows his family, you should encourage him to grow his business by exporting his produce.  Y’all need a nice organic fruit and vegetables store in the boondocks out there.

Gangadin probably doesn’t know that the Dutch was cultivating crops in Hague backdam hundreds of years ago before the British even set foot on the land.  Django, as a successful businessman who knows his family, you should encourage him to grow his business by exporting his produce.  Y’all need a nice organic fruit and vegetables store in the boondocks out there.

The kid too young to know, about the Dutch and British presence at Hague. Anyway our ancestors was Indentured to the Sugar Plantation at Hague in 1869.Also few generation navel string juk in the village.

The Spanish stores covered the market ,with that sort of produce. We aren't clustered up here like NYC. There are no neighborhood we can claimed as our hood.

Sign In To Reply
Post
Current Visitors: 181 (25 members, 156 guests)
Welcome to the Original Guyanese Discussion Forums, first established in 1996. Here you can discuss, ask questions or generally debate anything related to politics, movies, music, health or just gyaff away your day/night here. A note of warning, the Political forum is not for the faint of heart.  We do have some rules, so please adhere to them.
Privacy Statement - Rules
Join Now
Dave , Do you know although Sase ,resigned from the AFC ,he was still with the party ? Do some research ,info here in the archives.
2 minutes ago

Chief did well if he helped kick out the PPP.
2 minutes ago

@Tola Tola, I knew your friend John Gopaul. I had to house him for a few weeks when I was living in an apartment. I knew him very well.
4 minutes ago

Siggy, you need to keep up to speed on need and news conferences. Jagdeo clearly stated that the PPP will have an incisive...
5 minutes ago
which one?
7 minutes ago
MY POINT OF VIEW ....SASENARINE SINGH
2 minutes ago

What's next in April for the divided Guyana
5 minutes ago

Forget elections...this COVID thing is the real story
7 minutes ago