Several workers from the Diamond Sugar Estate picketed yesterday in front of the field office to press the Guyana Sugar Corporation (GuySuCo) to pay them a severance package, rather than have them redeployed.
GuySuCo has already indicated that the Diamond Estate is to be shut down as part of the corporation’s restructuring programme. The workers are being offered employment at the La Bonne Intention (LBI) Estate. But most of them say that it would be impractical for them to travel such a long distance.
Some of the workers reside at Parika and Soesdyke, and begin travelling from 04:00 hrs to reach the Diamond Estate. They would have to rise even earlier if they are redeployed to LBI. And some who were redeployed have accused GuySuCo officials of misleading them, claiming that there is often no work for them when they arrive on site.
Two representatives of the protesting workers alleged that Minister of Agriculture Robert Persaud has failed to follow through on his promises to meet with the Guyana Agricultural and General Workers’ Union (GAWU) to resolve the issue.
The workers intend to resume their protest action today.
“They got money fuh tief, leh they find we money,” one female worker said.
“Look at what they paying the managers. Let them cut (redeploy) from the top,” another worker said. “It look like slavery come back.”
According to Workers’ representative Lucien Pierre, the employees were entitled to a severance package, similar to what GuySuCo has given others in the past.
“When the Diamond factory and workshop were closed, the workers got their severance pay and now the plantation is closing, we want our severance pay.”
Pierre said that Minister of Agriculture Robert Persaud had promised to visit the estate on March 5. “But March 5 gone and he did not meet with us. He went to Blairmont and now I hear that he is in Israel.”
Highlighting some of the problems with the LBI plan, employee Michael Thomas said that members of the Diamond Estate shovel gang who were transferred to the LBI Estate found that there was no work for them there for seven weeks. According to him, much of the work that the shovel gang did at Diamond Estate is being done by machine at LBI. 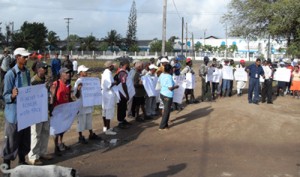 Some of the protesting workers

Highlighting other problems, some of the women who work in the weeding gang also complained that their NIS contributions were incorrect.
Another woman also alleged that she suffered from facial burns after being sent to work in fields that had been sprayed with insecticide.
In a release issued yesterday, GAWU stated that almost all of the workers (just over 400) attached to Diamond Estate participated in the picketing exercise.
“The Diamond cultivation which comprises some 6,000 acres is slated for closure. The Corporation’s Blueprint for Success, also described as the Turnaround Plan, released last April confirmed the cultivation’s closure.” Since last year all categories of workers but the cane harvesters were instructed to take up work at the LBI and Enmore locations – miles away from their homes and their regular workplace.
According to the release, GAWU has contended that the decision to close the Diamond cultivation is injudicious. “The Union pointed out that in keeping with the Corporation’s goal of ultimately producing 80,000 tonnes of packaged sugar at Enmore Estate, the maintenance of the Diamond cultivation would ensure an adequate cane supply and would save the Corporation millions of dollars, having to develop new lands on the East Coast of Demerara which certainly would not be as high yielding as the Diamond cultivation.”
“The Corporation, ignoring the Union, is advancing the closure process as it is merely reaping the existing canes and not doing an iota to facilitate new cane growth. The Union, in the circumstances, fully supports the workers in their bid to be paid their severance pay in keeping with the extant Collective Labour Agreement.”
“The deployment of the workers to the East Coast Demerara Estates will rob the workers of their payoff benefits noting that many of them will either immediately or gradually opt out of the employ of the Corporation once they are permanently deployed to the East Coast Estates. The Union aware that the struggle of the Diamond workers will require the solidarity of fellow workers across the industry as well as others will do everything to support the workers so that the insensitive Corporation does not deny them their rightful Severance Pay.”

Some of the striking workers yesterday

More than 500 workers from the Diamond Sugar plantation yesterday began a strike to force GuySuCo officials to give them a definite answer about their fate with the corporation.
They say that their action comes in the wake of reports that the estate is to be shut down.
The Diamond Sugar plantation has been earmarked as one of the estates that will be closed as part of GuySuCo’s restructuring programme.
The workers are to be re-deployed to the La Bonne Intention Sugar Estate. Some have already been sent there to work.
But Lucien Pierre, a GAWU representative, said that GuySuCo had not officially informed the workers of their fate.
According to Pierre, a written request for a meeting was sent to the officials last week, but to date, there has been no response.
And the cane cutters and other workers told reporters that they will demand a severance package from GuySuCo rather then be re-deployed to LBI.
“We are striking to let GuySuCo know that we want our severance package and no deployment,” Pierre said.
In a statement issued yesterday, GuySuCo officials alleged that a meeting was already “in train” when the strike action was taken.
“Following reports that a group of sugar workers had staged a strike action outside of its Diamond Office on the East Bank of Demerara, the Corporation would like to make it clear that a meeting between the Management of the Sugar Industry and the Guyana Agricultural and General Workers’ Union (GAWU) was already in train, where GuySuCo will address the concerns of the Union and workers,” the statement said.
“It is the hope of GuySuCo that such a meeting will materialize shortly, as the Corporation maintains its commitment to engage all stakeholders in the effort to revitalize Guyana’s Sugar Industry.”
Nevertheless, GAWU representative Lucien Pierre said that the sugar workers will continue their protest action today as planned.
He warned that the strike could continue if the workers’ grievances are not addressed.
Stating their reluctance to be transferred to LBI, some of the workers explained that they will be further inconvenienced by the long distance they would have to travel.
Some of the employees, including women, reside as far as Zeelugt, West Coast Demerara and Tuschen, East Bank Essequibo.
Pierre and other cane-cutters questioned the logic in closing the Diamond Sugar estate, which they claimed has the richest land for cultivating sugar cane.
Airing other grievances, Pierre blamed poor management at the Diamond estate for causing the workers to fail to make their target of harvesting 1,014 tons of sugar cane per week.
He said that they have failed to make the target in the past five weeks.
He explained that management brought in eight mechanical loaders for the LBI and Diamond Estates in the wake of a shortage of workers. However, only three of the harvesters are operational.
The workers complained that they have not been receiving their Weekly Production Incentive, (which amounts to a day’s pay) because they have been unable to make their weekly target within the past five weeks.
They said that so far, workers at other estates have received 36 days’ pay for reaching or exceeding their weekly targets.
Pierre and the striking workers also expressed concern about their National Insurance Scheme contributions.
Some workers who checked at the NIS offices were often informed that most of their contributions were not documented, even though they have been employed with GuySuCo for several years.
Another worker complained that management has indicated that the estate dispensary will be closed. He said that this means that workers will have to seek medical treatment at the Diamond Diagnostic Centre.

Labba, very  good question. I will have a more in-depth discussion with my dad on this Sugar estate thing and share it. He was a union rep for decades.

Bai Labba, the business must be really slow today. Wah happen you cane juice got sour overnite and peeple nah want fuh buy? You rass ah go back to 2010 fuh keep busy? Try go back to 1910 and see if you can find me jackass in you search

Join Now
cain replied:
Shelly you DIPSHIT why don't you go trip yourself up outside and fall on your mouth a few times? I'm sure your neighbours would stand...

shallyv replied:
You ignore the fact that I've already called you fisherman! Why? Mental retardation? Slow to understand? What? Angler is just a...
Django replied:
Looks like concrete .

Kapadulla Wood replied:
Agriculture has to be part of a big coordinated package. It cannot work in a bubble.
shallyv replied:
Looks sturdy! What kind of foundation? Any load limitations?
Bet on agriculture to beat resource curse — Prof. Terrence Blackman
56 seconds ago