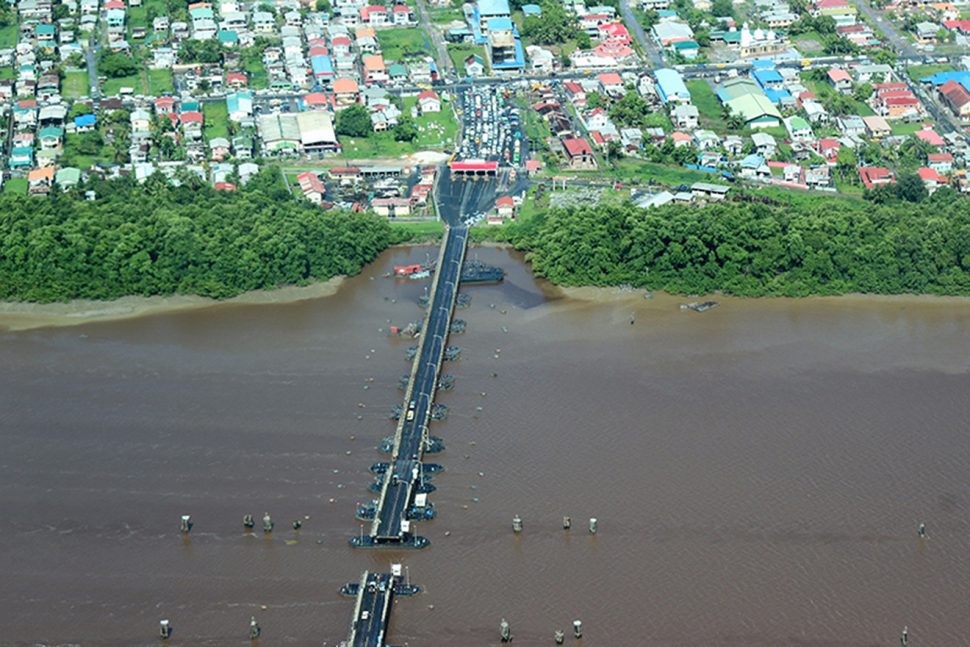 A view of the Demerara Harbour Bridge

Courtney Benn Contracting Services Limited (CBCSL) received hundreds of millions of dollars in advance payments dating back to 2008 from the Demerara Harbour Bridge Corporation (DHBC) and up to last year had not provided the requisite services, the 2014 audited Financial Statements of the DHBC stated.

CBCSL was contacted yesterday by Stabroek News for comment on this report which was laid last week in Parliament but up to press time there was no response.

“Several advanced payments were made to suppliers for services and inventory totalling $498,813,241 at December 2014. Included in this balance is $424,690,611 advanced to Courtney Benn Contracting Serviced Limited,” the Audited financial statements for the corporation, which were laid in the National Assembly on Monday stated.

“We have also noted that some payments were made since 2008 for which services/inventory have not been received up to the time of completing our audit in 2017,” the report on the bridge, audited on behalf of the Auditor General  by the auditing company HLB, R. Seebarran & Co,  added.

The report noted that as at end of last year August, the outstanding figure was reduced to $210,681,838 and the company had laid out a plan for how the remaining works would be done but that the issue of the providing of performance guarantee bonds was not addressed.

Adams yesterday explained that the DHBC continues to work with the company to ensure all works advanced for were completed.

However, he lamented that the company was refusing to give the corporation the necessary guarantee bonds.

“The contractor is refusing to issue us the bond,” Adams added.

As it pertains to CBCSL, this newspaper was referred to the company’s Chief Accountant, Mr. Sankar (only name given). The Chief Accountant took excerpts of the report and what was relayed by Adams and promised to get back to Stabroek News by the end of the work day.

When calls were made to his office yesterday afternoon, an employee who gave her name as Malini said that Sankar was not available.

Up to press time no other word was received from Sankar or the company.

Highlighting that similar irregularities which had over the years been pointed out but nonetheless continued during the 2014 year, the report made reference to performance guarantee bonds for prepayments which had expired and had not been renewed. “As noted in Appendix I attached, the performance and advance bonds for outstanding works of $262,184,220 at December 31, 2014 expired at various dates in 2013, 2014 and 2015. These bonds have not been renewed to date,” the report said.

HLB, R. Seebarran & Co states that at the time of their field audit, in October of 2016, and when the matters were discussed with General Manager Rawlston Adams and his Accountant, letters were also dispatched to the suppliers to refund advances for the years 2008-2012. A request was also made for the suppliers to have the remaining bonds renewed.

However, no refunds were received nor were the bonds renewed.

The failure by the DHBC to ensure that it has up-to-date bonds exposes it to credit risk and shoddy works, the report notes. “The failure to renew performance and advance guarantee bonds when due for renewal could result in the corporation having no security and no work or poor quality work executed by the contractors,” the report stated.

As such, the Auditor General made recommendations that DHBC management assess the recoverability of advance payments made to Courtney Benn Contracting Services Limited and ensure that securities are renewed on an ongoing basis, taken into consideration that services were not fully received up to the ending of December 2014 for  payments made since 2008.

Management were also urged to consider making payments when the services and inventory are required to avoid having significant cash outlay years in advance such as when pontoons are available to the contractor.

The auditors asked the DHBC management to state when and how the amounts outstanding would be repaid or recovered and to also give a confirmation of the balance outstanding.

On the 21st June 2017 CBCSL was written to and the DHBC informed the Auditor General that it would no longer be receiving subvention funding for works which require such advanced payments. As such, there would be no need for such advances.

CBCSL also laid out a detailed schedule of works for the remaining sums for which the DHBC said it did not have a problem with and which Adams yesterday followed up on saying that both parties were working to resolve.

While the DHBC submitted to the AG requested documents and statements concerning the outstanding amounts and works, the Auditor General was quick to remind the corporation that monies left over from a fiscal year should be returned to the state treasury, unless otherwise approved by the Ministry of Finance.

“While we noted that the balances owed by Courtney Benn Contracting Services Limited have been reduced to $210,681,838 as at August 31, 2017, we cannot conclude that the corporation’s risk of recoverability is not a concern, given the fact that performance bonds have not been renewed and that they are unfulfilled contracts from 2008,” the Auditor General wrote to the DHBC management.

“The recoverability of this amount will be reported in the audit report. In any case, unused government funds should have been returned to the treasury at the end of the year, unless approval was received from the Ministry of Finance,” it added.

Some of the works done on the floating bridge in 2014 included the installation of cluster piles and retractor span, installation of pivots, installation of gunwales on distribution beams and new A-frames, fabrication of buoys and installation of navigation lights along with the commissioning of a wireless data transmission link. Cummings Electrical has also installed new retractor power cables.

A tower has been installed, Adams had said, adding that it was a breakthrough in linking departments. The tower covers a range of ten miles and can monitor operations within that domain. Once staff members sign in that information is automatically fed to the Demerara Harbour Bridge.

The 40-year-old bridge is a major transportation link for Regions 3 and 4 and other outlying regions.  Sitting across the Demerara River, approximately 6km from the river’s mouth, spanning from Peter’s Hall to Meer Zorgen, the Demerara Harbour Bridge is 2.0km long and has 61 spans.

From the date commissioned to present, the Demerara Harbour Bridge provides access for approximately 18,000 vehicles to transit between the east and west end daily, with a maximum vehicle tonnage of 22.4 tons.

Plans are currently on stream to build a new and more modern bridge with government recently looking at proposals from companies to have a four lane non retractable bridge instead.

[not so?] strange how SN neglects in their headline to 'locate' this skontracta fraud in the JAGDEO glory days

where is the subhead?

The crude, agenda-driven editorial cabal at SN getting less opaque by the day

Sign In To Reply
Post
Current Visitors: 54 (8 members, 46 guests)
Welcome to the Original Guyanese Discussion Forums, first established in 1996. Here you can discuss, ask questions or generally debate anything related to politics, movies, music, health or just gyaff away your day/night here. A note of warning, the Political forum is not for the faint of heart.  We do have some rules, so please adhere to them .
Do not post any messages that are obscene, vulgar, sexually-orientated, racist, hateful, threatening, or that otherwise violate any laws. Do not post any messages that harass, insult (name calling), belittle, threaten or mock other members.

Join Now
seignet replied:
Ole ppl duz become chilish after 70. I wonder wah Biden goan be. Nancy took up the challenge for Ronny when he lost his faculties. I...
Prashad replied:
You got it right.

GTAngler replied:
I am not at all surprised you would think that. I would have had a heart attack if you thought otherwise.

Prashad replied:
Trump was a good President. Prashad supporting him again if he runs again.

GTAngler replied:
Trump was a disgrace as a president. He tried to run the country like he did his businesses. Strong arm tactics and under the table...

Admit you mucked up elections petition and stop “cussing down” the Chief Justice – Nandlall tells Coalition lawyers, leaders
2 hours ago