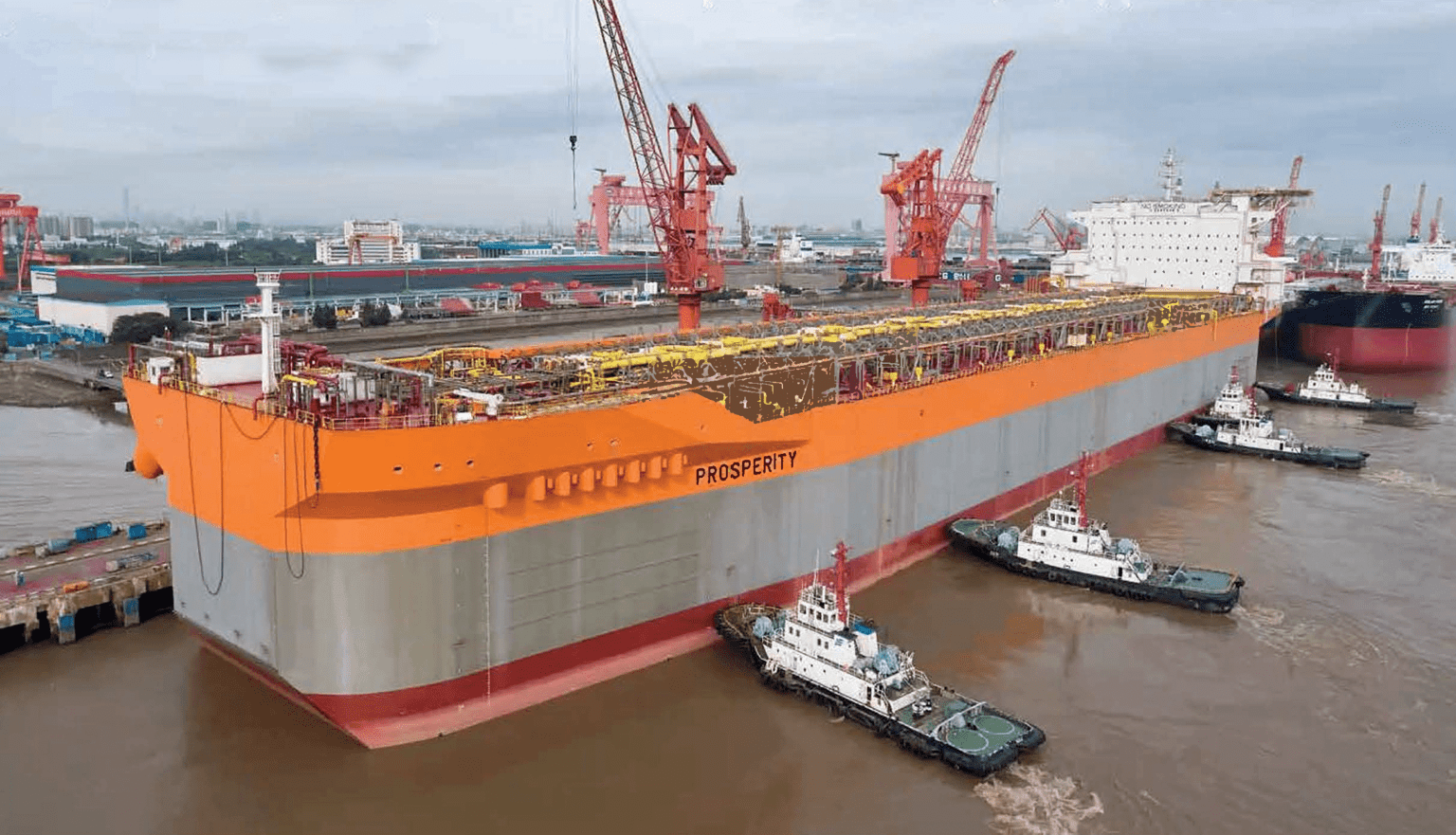 The hull for the Prosperity FPSO which will be used to develop the Payara field offshore Guyana.

Chinese state-owned oil and gas company CNOOC is raising 35 billion yuan ($5.41 billion) in a new share issue on the Shanghai stock exchange to fund several key oil and gas projects including Payara, offshore Guyana, where it has a 25% stake in the Stabroek Block.

The domestic fund-raising plan came as U.S. sanctions on CNOOC has forced global investors to exit or scale back investing in the firm.

CNOOC said in a statement that its board has resolved the issue of new yuan-denominated shares to be listed on the Shanghai Stock Exchange, pending approval from its existing shareholders and regulators. The company, already listed in Hong Kong, has called a shareholder vote for October 26. It did not disclose the expected listing date.

Based on the Monday close in Hong Kong, the shares that are planned to be offered in Shanghai will be worth the equivalent of 21 billion yuan. However, the pricing mechanism in mainland China is structurally different from the rest of the world, including Hong Kong.

The Guyana Government on September 30, 2020, announced the approval of the 220,000 bpd Payara Development Project.

The $9 billion development, targeted for start-up in 2024, will focus on an estimated resource base of about 600 million oil-equivalent barrels. Ten drill centers are planned along with up to 41 wells, including 20 production and 21 injection wells.

The Chinee Man running away with alyuh money

Chinee man to Guyanese rice farmer:  I sell rice by the plate and own Laurel. You plant rice by the hundreds of acres and you drive a old truck. LOL

They will be Guyana's new masters along with the Saudis.

They will be Guyana's new masters along with the Saudis.

Guyana is an oil State. Probably alot of Muslim Guyanese will be sporting Saudie attire. Dem muss be whispering in Irfaan ears.

Sign In To Reply
Post
Current Visitors: 12 (3 members, 9 guests)
Welcome to the Original Guyanese Discussion Forums, first established in 1996. Here you can discuss, ask questions or generally debate anything related to politics, movies, music, health or just gyaff away your day/night here. A note of warning, the Political forum is not for the faint of heart.  We do have some rules, so please adhere to them .
Do not post any messages that are obscene, vulgar, sexually-orientated, racist, hateful, threatening, or that otherwise violate any laws. Do not post any messages that harass, insult (name calling), belittle, threaten or mock other members.
Do not use profanity, racial, ethnic, religious, or other slurs and stereotypes, or post sexually-oriented material, masturbatory and excretory references, or any other offensive material.

Join Now
Keith replied:
Trusting God’s Plan in Trouble Genesis 12:10-20 Does your faith shrivel when you encounter trouble? Perhaps you prayed about a situation...

cain replied:
Re: People say….what is your interpretation?

cain replied:
He'll be real happy if they were to buy him a fried rice an a bokkle of whatever dah stuff he drinks...ahhhh leh me see now..oh yeh, .c...

cain replied:
I got a feelin Bro Keith partakes in a Bhajan or two in the mornings.

Irfon Ali replied:
he will be laughing maniacally and BJ and friends will say he's a madman
cain replied:
Look yeh, de man gaffa eat an' ting and the only way for him to do so is for him to write stuff, any kinda stuff regardless, just write.

Start your Mornings with Bhajans
9 hours ago

Poetic justice might be in de making!
13 hours ago