Former Member
Citi's Vikram Pandit on the hot seat
The FDIC is said to be looking to replace Pandit, a sign that regulators won't go easy on the managers of banks that might have failed without taxpayer help. 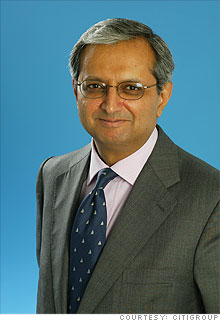 Citi chief Vikram Pandit is under pressure from regulators.

Citi shares have bounced but trade at just a fraction of their year-ago level.


NEW YORK (Fortune) -- It's starting to look like the spring awakening in bank stocks may not be enough to save the CEOs of America's biggest troubled banks, Citigroup's Vikram Pandit and Bank of America's Ken Lewis.

A top banking regulator is agitating for Pandit's removal, according to a report Friday in the Wall Street Journal. The clash between Pandit and Sheila Bair, the head of the Federal Insurance Deposit Corp., comes just a month after restive shareholders at Charlotte-based BofA (BAC, Fortune 500) stripped CEO Lewis of his chairmanship.

The FDIC told CNN it had no comment on the story. Citi (C, Fortune 500) says it stands behind Pandit, who took over as CEO at the end of 2007 and has spent much of his tenure trying to clean up the messes left by his predecessors Chuck Prince and Sandy Weill.

In a statement to CNN Friday, Citi chairman Dick Parsons said the company was "confident in our management."

BofA has similarly endorsed Lewis, and the three-month-long rally in bank stocks has quieted talk of wholesale government takeovers of these firms.

But given the massive investor losses at these banks and the failure of their top managers to anticipate the industry's meltdown last year, few would shed a tear at either executive's departure.

"These companies are sort of the poster children for the excesses that created this crisis," said Eric Jackson, an activist investor and managing member of Ironfire Capital in Naples, Fla. "I think it's appropriate for the regulators to push for substantial changes in management and on the boards." Jackson's firm does not own shares of either bank.

Citi and BofA have been the two biggest bank recipients of federal aid since the financial crisis erupted last fall. Together they have taken some $500 billion in federal aid, the lion's share of which has come in the form of federal guarantees of their troubled assets.

Recently, both firms have shown some signs that they have broken out of what earlier this year looked like terminal decline.

Shares of Citi have tripled since Pandit surprised Wall Street by saying Citi was on track for its first quarterly profit since mid-2007. BofA's stock price has quadrupled during the same time frame.

Both banks went on to report better-than-expected first-quarter results in April. Those surprises further boosted the shares even as many observers warned the numbers were padded by one-time gains and legal but incredible accounting maneuvers, such as profits tied to the declining value of the banks' own debt.

The hopes of a banking sector recovery only intensified after regulatory stress tests showed banks didn't need that much more money. The findings helped spur a surge of capital raising from the private sector that has bolstered the balance sheets of many big institutions.

0:00 /4:01'Government won't run Citi'
But while investor fears of a giant bank failure have dissipated, regulators haven't lost sight of the problems ahead. Though the 10 of the 19 biggest banks that had to raise $75 billion in capital after the stress tests had no trouble doing so, future loan losses will surely dwarf that figure -- which means further capital raises could be necessary.

"There's a desire to make sure the banks don't get complacent," said Douglas Elliott, a former investment banker who is an economic studies fellow at the Brookings Institute in Washington. "Until we have a better grasp on exactly how bad the losses are going to be, it's important to be cautious."

Even before the FDIC's push to oust Pandit came to light, it was clear that policymakers intended to shake up the big banks.

BofA named a new chief risk officer this week after regulators questioned the management failures that led BofA into its current morass. Citi shook up its own board earlier this year, with former Time Warner (TWX, Fortune 500) chief Parsons replacing Win Bischoff as chairman and Clinton administration Treasury Secretary Robert Rubin stepping down. (Time Warner is the parent company of Fortune and CNNMoney.com.)

Still, skeptics such as Jackson say a change here and there won't be enough, given the size and visibility of the two big banks.

"How can you have such massive failures without there being accountability?" said Jackson. "Citi and BofA are so large, so critical, they're almost a case unto themselves."

And some observers believe that even management changes won't be enough, and BofA and Citi will have to be broken up.

Vernon Hill, a longtime bank executive who is now chairman of investment firm Hill-Townsend Capital in Bethesda, Md., notes that a recent national customer satisfaction survey showed Citi was either last or tied for last in each of the five regions in which it does retail banking.

Sign In To Reply
Post
Current Visitors: 144 (1 member, 143 guests)
Welcome to the Original Guyanese Discussion Forums, first established in 1996. Here you can discuss, ask questions or generally debate anything related to politics, movies, music, health or just gyaff away your day/night here. A note of warning, the Political forum is not for the faint of heart.  We do have some rules, so please adhere to them .
Do not post any messages that are obscene, vulgar, sexually-orientated, racist, hateful, threatening, or that otherwise violate any laws. Do not post any messages that harass, insult (name calling), belittle, threaten or mock other members.

Join Now
cain replied:
Exactly as I've said many times, the Coalition people were too bradar and barefaced like rass. Dem PPP guys got em beat.

cain replied:
Vish, what is meant by, "some are saying it's a way to get more money" as read in the link?

lil boy replied:
No, it is you that is confusing, and incoherent. You said 'this forum is yet to nominate anyone. No wonder the vacancy is still open.'...
Vish M replied:
write coherently this forum has many viewers

Former Ministers Patterson and Ferguson received over $6.7M in gifts from Harbour Bridge, other agencies
35 minutes ago