Earlier this evening, attorney at law and People’s Progressive Party/Civic (PPP/C) member, Charles Ramson told residents of the Queenstown, Albertown area that Chris Gayle wants to collect the money that is still owed to him by the People’s National Congress Reform (PNCR). This was during a PPP/C public meeting.

According to Ramson, he was reliably informed that Gayle is actively trying to get the outstanding money that was promised to him for his visit to Linden when PNCR celebrated its 62nd anniversary in October last. 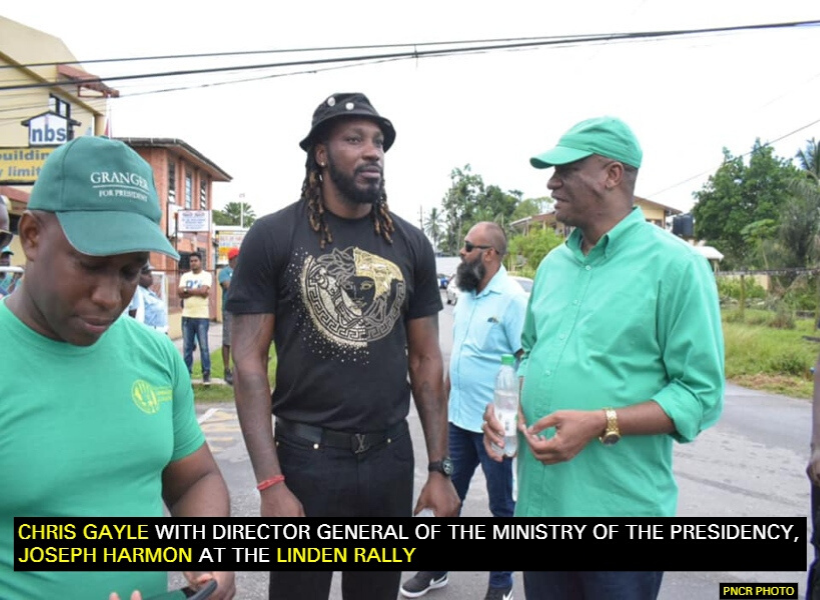 Ramson said that Gayle was promised US$50,000 for the visit to Linden where he walked with PNCR officials and greeted supporters. However, the world-famous cricketer, according to Ramson, was only paid US$10,000 of the promised sum.

Ramson told those who listened to him, “Nothing don’t hide in Guyana, that is how I know about the Chris Gayle story.”

He also told listeners, some of whom erected APNU flags and banners with President David Granger, “If you don’t believe me ask Harmon, he knows about it.”

The politician told listeners that they should be worried when PNC brings foreigners to do its bid as often times “it is your money that is being used, tax dollars.”

Ramson said that it is that sort of “wastage” and “disrespect” that the people of Guyana must vote against come March 2. He said, “It is only 32 days left to get rid of this incompetent cabal. Do not hold on to all their failed promises. They were to jail Jagdeo but up to now, they cannot touch him. How they will fulfill these other promises if they cannot even touch Jagdeo.”

He said that while house lots were only given out to foreigners and ministers, the PPP is set to deliver 50,000 low-cost house lots within the next five years.

He said, “We are going to ensure free university education, 20,000 online scholarships and we are going to immediately bring back the $10,000 cash grant then increase it to $50,000 per child in the coming years.”
Ramson also spoke about the new tax regime that PPP will create to ensure the ordinary man has to pay less and thus will have more money in his pocket.

Ramson said that Gayle was promised US$50,000 for the visit to Linden where he walked with PNCR officials and greeted supporters. However, the world-famous cricketer, according to Ramson, was only paid US$10,000 of the promised sum.

dat has nothing to do with winning a friggin Election. Besides it is hearsay!!!

dat has nothing to do with winning a friggin Election. Besides it is hearsay!!! Dave Post some nice PPP black and Dougla Gyals for Nehru. Show some pretty PPP diversity. All ah we is one family.
PPP must turn into a one family party from now to eternity.

You is a smart man.
You know dat you have a few Dougla Pickney all over Guyana right ? Thanks to you we country headed to ending one race domination.

Prash has been calling for douglarization of Guyana for a very long time and de man was right.

10 thousand US dollars for nonsense. That money could have gone to several poor students to pay their exam fees. What a waste of money. These antikoolie racists have no shame.

Base, Brother Kaz is now using this quote. Did you approve it ?

Sign In To Reply
Post
Current Visitors: 168 (3 members, 165 guests)
Welcome to the Original Guyanese Discussion Forums, first established in 1996. Here you can discuss, ask questions or generally debate anything related to politics, movies, music, health or just gyaff away your day/night here. A note of warning, the Political forum is not for the faint of heart.  We do have some rules, so please adhere to them .
Do not post any messages that are obscene, vulgar, sexually-orientated, racist, hateful, threatening, or that otherwise violate any laws. Do not post any messages that harass, insult (name calling), belittle, threaten or mock other members.

Join Now
Tola replied:
Like de PPP teach you this at FreeDum school.

Tola replied:
If Rama kant, how come you still hea and not in PPP paradise ?

I am Invited to Join The Backdam Crew by a member.
7 minutes ago