China wants to build a 200km-long undersea tunnel to America

And it'll take a whole day to get there. Sort of

China likes trains. Its latest idea is to drive a railway route from Beijing to America via Russia, running under the Bering Strait to Alaska, Canada and America.

The 8,000 mile route would need two undersea tunnels; one running from Russia to the Big Diomede Island, and one from Little Diomede Island to America – well, Alaska. The three miles between the two islands could be crossed by a shorter third tunnel or a bridge.

This journey would take a day, as the international date line splits the islands, which are known as Tomorrow Island and Yesterday Isle.

Much like the Channel Tunnel, the scheme to link the East and West has been kicking around for a hundred years. Tsar Nicholas II thought it a good idea in 1905, and El Reg wrote about it in 2007, when we reported that Russia was more interested in links with China.

The new Chinese scheme provides both, giving China a land route to the US (and Canada) and Russia a route to both North America and China.

According to the Chinese website sina.cn.com, engineer Wang Meng-shu lays out a plan for a route from northeast China through the Bering Strait.

It is reported that Wang Meng-shu said that his plan would have 200 kilometres of tunnels; albeit not contiguous, this is breathtakingly ambitious. China, however, claims to have the technology. The 8,000 mile route would reduce the need to fly, although at 350kph (220mph) it would still take two days.

China has a number of ambitions train projects in the pipeline. It is experimenting with a Hyperloop-style enclosed system which could, so it says, hit 1,800mph. 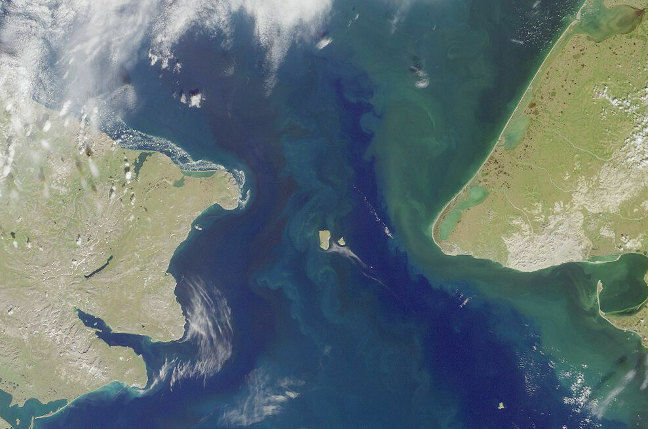 The Behring Strait. Russia is to the west, Alaska to the east

I believe they can do it. China is becoming famous for monumental undertaking. Also, they have the man power and money. Are we going to live to see this mega reality, D_G? BTW, I am accustomed to be above water. Under water for a day or two...I don't think so.

China and Germany already has a 5,000 km plan on the table bridging Beijing to Berlin.

Are we going to live to see this mega reality, D_G?

We probably may do so, Cobra, as it would be interesting to note and observe these types of developments.

By plane, I am about one and a half hours away from the location in Alaska.

China also has plans in other countries.

Welcome to the Original Guyanese Discussion Forums, first established in 1996. Here you can discuss, ask questions or generally debate anything related to politics, movies, music, health or just gyaff away your day/night here. A note of warning, the Political forum is not for the faint of heart.  We do have some rules, so please adhere to them.
Privacy Statement - Rules
Join Now
This youngster is doing an honorable thing fighting for democracy but it looks like this youngster is guarding the box because he is...
1 hour ago

Looks like Ruel got robbed badly in this election.
1 hour ago

Dem probably laughing at you guys antics and want see how many gun buss their pipes. You see Anil driver, I sorry for dah young man but...
1 hour ago

Banna doan make Iman laughnow, I was being sarcastic. So, you like Ron's last paragraph eh? Did you really read it? Dem guys gonna laugh...
2 hours ago

Why did you use that word? Would your foundation reject them?
2 hours ago

KEEP THIS TRAITOR AWAY FROM GECOM RECOUNT... SHOULD WE LAUGH OR CRY
4 hours ago

OUTRAGEOUS, MASSIVE LAST MINUTE TRANSFER OF STATE LANDS TO MANY INCLUDING FORMER COALITION MP
4 hours ago