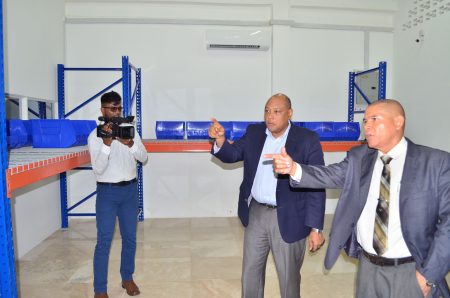 From right: Ministers George Norton and Raphael Trotman on a tour of the bond (SN file photo) 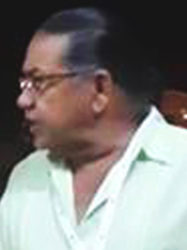 More than a year after the drug bond scandal erupted, there is nothing to suggest that the multimillion contract for the monthly rental of the Sussex Street property has been terminated, according to PPP/C MP Anil Nandlall who has expressed concern over the matter and called for it to be put back on the front burner.

“After the controversy broke in August, 2016, Cabinet set up a sub-committee which recommended an early termination of the five-year contract. A year after there is no evidence to suggest that this contract has been terminated or is nearing termination. The bond scandal should be revisited”, Nandlall told Stabroek News on Saturday.

Controversy erupted early last year after it was revealed that government was paying businessman Larry Singh (owner of Linden Holding Inc.) a monthly rental of $12.5M for a building at Sussex Street to store drugs.

A cabinet subcommittee was convened after former Health Minister Dr. George Norton had been found lying to Parliament in relation to the drug bond.

The subcommittee’s report has stated that  the lease should be revisited and strengthened and if there is a refusal by Linden Holding Inc, the landlord, government should give a year’s notice of a termination of the lease and build its own facilities in the intervening period.

“With respect to the rental sum of $12,500,000 it is the subcommittee’s considered opinion that the value should be re-assessed as it is likely that a similar facility could be obtained at a lower rate,” the report said.

It added that the general terms of the lease “are not altogether unfavourable” to the Ministry of Public Health as the lessor is obligated under the agreement to maintain the facility at a standard that will meet national and international specifications for the storage of drugs and pharmaceuticals.

However, the subcommittee added that the agreement could be strengthened with more specific terms that address insurance and maintenance.

Nandlall told this newspaper on Saturday that the rental was only made public following questions posed by him in the Committee of Supply in August, 2016. At that time, he reminded that over $50M had already been paid in rent but the bond was never used.

Subsequently he said, no tablets were found in the bond when an inspection was done by a team of Members of Parliament. The visit occurred during the 2016 Budget Debate.

“The nation’s taxpayers has so far lost nearly 200 million dollars in the process and the Treasury continues to bleed at 14 million dollars month. Yet we are told that we cannot afford to offer subsidies to our pensioners in relation to water rates and electricity bills; we are told that we cannot afford to remove VAT from private education for our children, medical supplies for our sick, educational supplies for our students, agricultural and mining equipment for our farmers and miners; we are told that we do not have money for the sugar industry so tens of thousands of people are being put on the breadline”, Nandlall stressed while adding that this waste of taxpayers’ dollars joins a long list of similar or more egregious expenditure of public funds at the hands of the Granger-led government. Among them he said is the $500, 000 monthly house rental for ministers, $1.3 M and $1.4 M per month as salaries for the director and lawyers respectively, attached to SARA; $1.4 M per month for rental of a building for SARA; and hundreds of millions of dollars being spent on Commissions of inquiry (CoIs).

“It is as if, this government has no concept of what is important or what should be priority for the people of Guyana. There is one certainty that will result from this level of squandermania.  It is national bankruptcy. We have travelled this road with the PNC already. They are taking us to that frightening destination, once again”, Nandlall said.

The deal with Singh to rent the Sussex Street property for use as a drug bond was said to have been initiated by the APNU+AFC government because extra storage capacity for drugs was needed. This was despite that fact that a government bond existed at Diamond on the East Bank where more pharmaceuticals could be stored.

Singh had never run a bond storage operation before and critics have said the deal appeared to be a sweetheart arrangement to give business to a PNCR supporter. There have been many questions as to how Singh was chosen given the fact that there was no public tendering for the rental of that building.

Sign In To Reply
Post
Current Visitors: 132 (17 members, 115 guests)
Welcome to the Original Guyanese Discussion Forums, first established in 1996. Here you can discuss, ask questions or generally debate anything related to politics, movies, music, health or just gyaff away your day/night here. A note of warning, the Political forum is not for the faint of heart.  We do have some rules, so please adhere to them.
Privacy Statement - Rules
Join Now
You are wrong. I have never given them permission. You are a loser if you did.
20 minutes ago

In a 2007 video interview at Freedom House, JJ said Cheddi was very upset at Indians parents asking him to place gold on their...
24 minutes ago

No it is your anti-koolie brothers and sisters who see me and you as inferior sub human koolies. But they are not man or woman enough to...
38 minutes ago

Oh rant Prash, I didnt know that's what I was thinking, hmmmmmmm You know what I'm thinking at this moment, I'm thinking you are mad.
38 minutes ago

Bail kee gandagee!!!!! You are one who is claiming that you are the sub human koolie offspring.
41 minutes ago

It is time for Ramjattan, Nagamootoo to leave politics
24 minutes ago
Appeal dismissed, but Court rules GECOM cannot hand over supervision of recount to CARICOM
2 hours ago

Canada helping its citizens leave Guyana
2 hours ago
LEAN ON ME....
2 hours ago