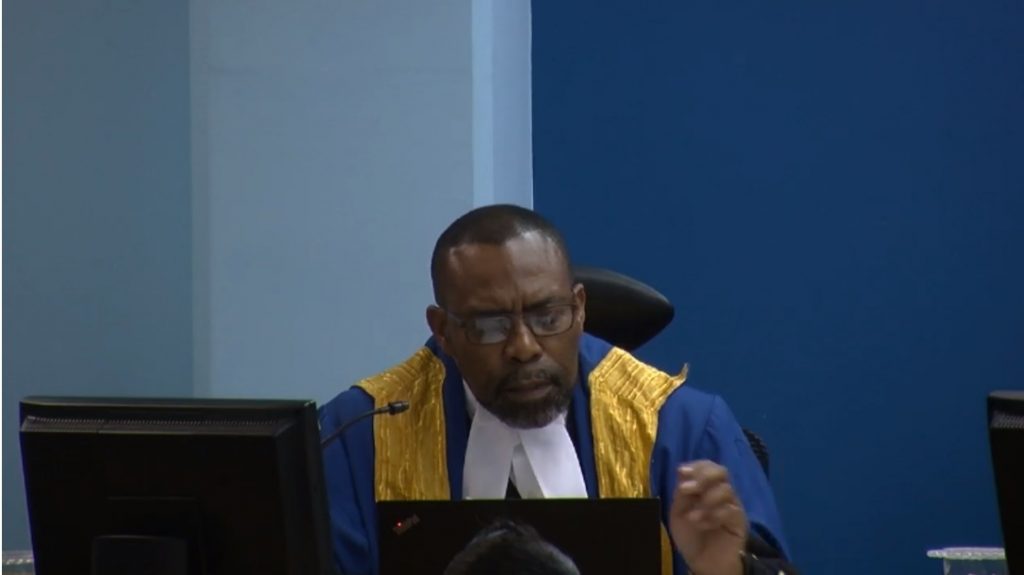 Trinidad and Tobago Senior Counsel, Douglas Mendes on Wednesday urged the Caribbean Court of Justice (CCJ) to find that President David Granger and Opposition Leader Bharrat Jagdeo should have consulted before submitting nominees for the post Chairman of the Guyana Elections Commission (GECOM).

And already one of the CCJ Judges, Winston Anderson, has indicated that there should be some form of ‘meaningful’ consultations between the President and the Opposition Leader to reach an acceptable agreement. “I think it’s a tragedy that we are here in this way. I won’t have thought that anybody would want the court to be the ultimate decider or put another way to get too intrusive in the process and hopefully, with the kind of guidelines which might be given. The two leaders can, in fact, agree so that we don’t have this kind of task before us,” he said.

Addressing the court on behalf of appellant, Executive Secretary of the People’s Progressive Party (PPP), Zulfikar Mustapha also told the judges that if they decide that GECOM Chairman, James Patterson’s appointment should be set aside, that such a decision should be suspended if they find that last December’s no-confidence motion was validly passed.

Mendes said, “If the court were to conclude in that appeal that an election ought to be held and that it must be held within a short period of time then we would want to address the court on whether you would want to consider suspending quashing the appointment of the Chairman in order that the election will not be disrupted.”

After Justice Winston Anderson sought clarification, Senior Counsel Mendes said there is precedent in Canada where a court had ruled that the failure to publish the laws in French was unconstitutional, but at the same time had suspended its decision.

The appeal to the CCJ stemmed from Mustapha’s failure to convince the Guyana High Court and the Guyana Court of Appeal that President David Granger’s unilateral appointment of Justice Patterson as GECOM Chairman in October 2017 was unconstitutional.

The prominent Trinidad and Tobago Attorney-at-law, in his oral arguments, acknowledged that the President enjoys the power to reject nominees, but the 1999 amendment to Guyana’s constitution provides for a shift away from the President’s unilateral appointment of the GECOM Chairman to a process that is acceptable to all parties.

“We are dealing with a modern constitution that imbues openness and transparency and what my learned friends have been submitting to you, with all due respect, is trying to take Guyana into the past into a situation where you have a monarchy—a President who is exercising powers that are unreviewable. That is not this constitution. This 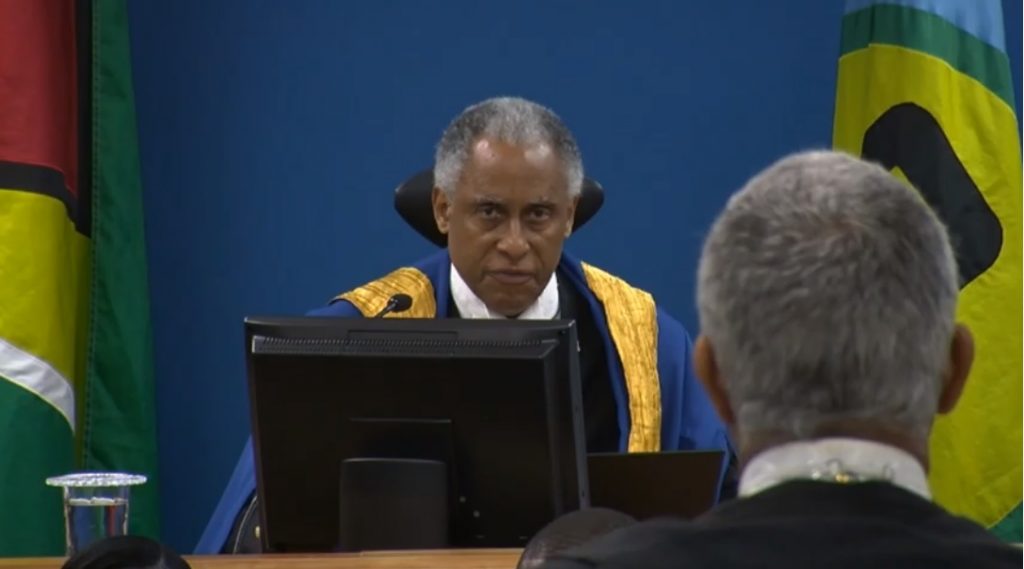 constitution goes to great pains to ensure that the rule of law is respected and that democratic principles are followed,” Mendes said. He said the Opposition Leader has to first ensure that his nominees are eligible after receiving guidance from the President on the qualities of the six nominees.

Justice Winston Anderson said he was somewhat concerned about the “degree to which we can import” the concept of meaningful consultations. In response, that does not mean there should not be some level of consultation to avoid a “guessing game” by the Opposition Leader. “It can’t work that way if the intention is that you have chairman of the commission that both parties are happy with, then the process has to be meaningful,” he said.

Mendes said the President would be justified to exercise unilateral action if the Opposition Leader stacks the list with party affiliates, but there should be a second round. Opposition Leader Bharrat Jagdeo had submitted three lists of six names each before President Granger had deemed those nominees unacceptable and went ahead and unilaterally appointed Retired Justice Patterson.

CCJ President, Justice Adrian Saunders remarked that it makes sense for them (President and Opposition Leader) to sit down and reach agreement before on six nominees beforehand. “This is why the optimum solution is for them to agree on six name,” he said.

Mendes cited prominent City businessman and veteran aviator, Captain Gerry Gouveia as an “eminent” person who had been involved in election monitoring since 1997, is a national awardee and a graduate of the United States Centre for Hemispheric Defence Studies. “We say presumptively he is fit and proper,” he said.

Justice Anderson said the constitution provides for “a list” meaning one list, but Mendes countered saying that the Opposition Leader does not have one opportunity. Justice Jacob Wit added that the process could begin with a letter.

On the question of whether President Granger was bound by the criteria that he had set out to the Opposition Leader, Mendes said that list of qualities “creates a legitimate expectation” and he should give reasons if he decides otherwise. “If he changes his mind, he has to say why and we have to be able to assess if he has acted properly in changing his mind or whether he is abusing his power but we will only know that if he tells us why,” Mendes.

The PPP’s lawyer charged that President is “not conducting himself…with a high degree of openness” and “on the face of the evidence that has been provided to the court and no evidence”. 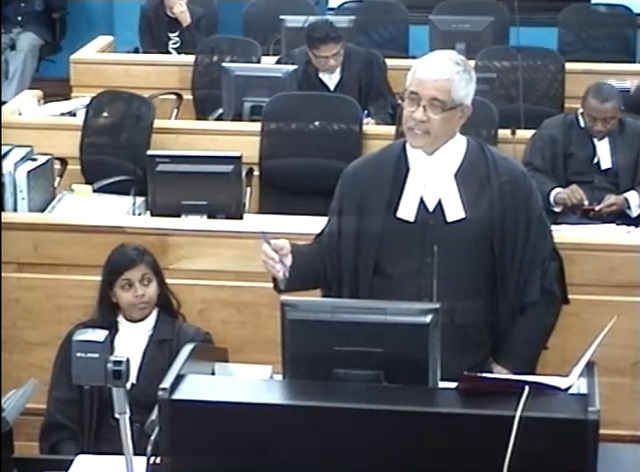 Justice Saunders repeatedly questioned whether the Opposition Leader and the public need to know what were the grounds for nominees to have been deemed unacceptable or whether “that is something that the president needs to keep within his bosom”.

Thorne argued that the the Opposition Leader merely needed to consult with the opposition parties and comply by submitting his nominees for the President to determine whether they are acceptable. “We are arguing that acceptability is not a joint exercise. My friend is reading into this constitution what does not appear on the face of the constitution. I do not agree with consultation,” he said.

While Thorne maintained that nothing in Guyana’s constitution provides for dialogue, he said the dialogue could be held after the Opposition Leader submits his list of nominees to the President. Justice Saunders, at one point, appeared to become impatient with Thorne apparently contradicting himself by stating that the constitution provides for only one list of nominees but saying there was room for dialogue on the integrity of the nominees.

Justice Saunders: To what end Because you add to that to submission that only list is permissible so what would be the sense of the Leader of the Opposition having dialogue at that point when, in fact, you are saying that he can’t submit anymore names?

Counsel Thorne: Perhaps we should not go as far as saying he cannot submit any other names but the constitution gives him the power to submit a list.

Counsel Thorne: Indeed, to give to the President the occasion to say to him that some persons on that list are unacceptable. I contemplate that that is the dialogue that transpires after the submission of the list

Justice Saunders told Thorne that he was giving the impression that the President could appoint whoever he prefers to be an elections commission chairman like had been the situation before Guyana’s constitution had been amended to include the 1990 Price-Carter Formula. “I’m getting the impression from you that the President can simply appoint who he wishes. That was what was in the previous constitution  and there was a whole Herdmanston Accord and deliberations that said ‘we don’t want that anymore’ but you still seem to be stuck on what was there before,” Justice Saunders said.

Thorne said the constitution seems to suggest that the President could reject all of the nominees, adding that he does not agree that the two politicians must first determine acceptability of the list.

Justice Wit remarked that “nothing has changed” based on Thorne’s argument as far as virtual unilateral appointment of  a GECOM Chairman after “going through the motion”.  “I have difficulty accepting that that could be the proper interpretation,” he said.

Sir Hal, in his submissions, said the President’s discretion could not be challenged and that the list of nominees must have at least one person who is not unacceptable to the President.

Sir Hal stressed that the President was not obliged to state who he did not find unacceptable and what the reason. The noted Barbadian Queens Counsel even went as far as saying, under questioning from Justice Saunders, that the President could change his own criteria he has set for nominees. “Yes, he is entitled to,” said Gollop.

He said Guyana’s constitution provides for the President to act in his own deliberate judgement except by any other provision of the constitution,  any other law that requires him to act on the advice or recommendation of any other authority.

Guyanese Judges(2 of them in the Appeal Court) are worst than DISGRACEFUL, DUMB and STUPID!!!

Anybody know if CCJ still on vacation?

CCJ is a hard-working group.

Sign In To Reply
Post
Current Visitors: 30 (3 members, 27 guests)
Welcome to the Original Guyanese Discussion Forums, first established in 1996. Here you can discuss, ask questions or generally debate anything related to politics, movies, music, health or just gyaff away your day/night here. A note of warning, the Political forum is not for the faint of heart.  We do have some rules, so please adhere to them .
Do not post any messages that are obscene, vulgar, sexually-orientated, racist, hateful, threatening, or that otherwise violate any laws. Do not post any messages that harass, insult (name calling), belittle, threaten or mock other members.

Shuman: a PPP proxy
6 hours ago

APNU/AFC to appeal dismissal of election petition
7 hours ago