Young Guyanese racecar driver Calvin Ming recorded valuable championship points over last weekend during the first round of the USF2000 championship this weekend in Saint Petersburg, Russia to be in fifth place overall after the opening round.
Ming noted that he had a tough qualifying round on Friday, posting on his Facebook page, “Another tough day in Qualifying one today. Will be starting the first race from 14th position. Still one more qualifying tomorrow to sort out all the kinks…” 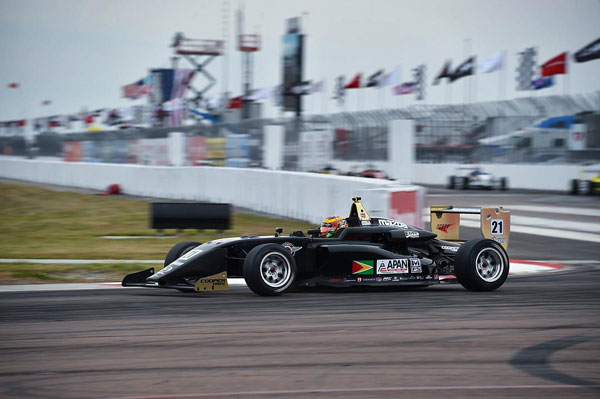 Ming finished the race on Saturday in fourth place after starting from 14th position. He again posted after the event and another qualifying session; “P4 finish in race one at Saint Petersburg from a P14 starting position….One more race tomorrow starting from the same position due to an unfortunate situation in qualifying again. Aiming on improving on the position today to aim for a podium spot tomorrow.”
However, things did not go fully to his plan as the young Guyanese speed ace had to settle for an 8th place finish. While not the desired result, Ming had valuable points after finishing in the top 10 on both occasions to be fifth in the standings.
“Scored some decent points this weekend with two top 10 positions. Finished race one in 4th and race two in 8th. Leaving the weekend 5th in points despite having issues all weekend and not having the results we wanted. Now we have some time to regroup and focus on the things we can improve on for the next round,” he wrote on Facebook.

Welcome to the Original Guyanese Discussion Forums, first established in 1996. Here you can discuss, ask questions or generally debate anything related to politics, movies, music, health or just gyaff away your day/night here. A note of warning, the Political forum is not for the faint of heart.  We do have some rules, so please adhere to them.
Join Now
Ex-basketball star Kobe Bryant, four others dead in helicopter crash
Banks DIH expanding into auto sales, energy services – Reis
Don’t approve Payara plan until Exxon improves deal in big way - -Mangal
List-joining parties in debut at Stabroek Market
Bushlot man hangs self after chopping wife
Bryn Pollard passes away at 92
GECOM Chair says elections will be free and fair - -cites safeguards
Gov’t says taking steps to counter any coronavirus cases
Current Visitors: 76 (13 members, 63 guests)
You fellas notice how the PNC outcast Sharma Solomon and Vanessa Kisson. You don't hear anything from them now. Very unfortunate. But...
16 seconds ago

I thought for a second you said Mit for Tit!
8 minutes ago

This is such a devastating loss. One of his daughters perished on the helicopter along with him.
11 minutes ago

Mits Bahi, nah get me in Al Yuh tit fuh tat.
28 minutes ago

President Granger Chased out of Linden
16 seconds ago

Chief Election Officer cautions about converging around polling stations-TELL THAT TO VOLDA.
8 minutes ago
12 years ago - A day of infamy. Never forget!
29 minutes ago

PPP/C will reverse decline of forestry sector
37 minutes ago