The victorious East Bank Essequibo team with representatives of the sponsor and ECB.

By Zaheer Mohamed in Essequibo
Kemol Savory struck a fine half century as East Bank Essequibo trounced Leguan by six runs to win the Busta / Essequibo Cricket Board first division 40-Over Festival on Sunday at the Imam Bacchus Sports Club ground, Affiance, Essequibo Coast.
Savory’s feat overshadowed a fine all-round performance by Leguan skipper Ricardo Adams, to hand East Bank Essequibo their third Busta title. The game was reduced to 30 overs following a late start due to the soggy state of the bowler’s run up at both ends caused by overnight rain.
East Bank Essequibo was inserted on a hard surface and opener Kevon Boodie struck the first ball of the innings from pacer Kevin Gordon to the long-on boundary, but Gordon provided Leguan with the breakthrough two balls later when he uprooted the stumps of Royan Fredericks (00) as East Bank Essequibo lost their first wicket with the score on five.
Batting at three, Savory cut Gordon for four but was dropped at slip off the very next delivery; wicket-keeper Mark Williams put him down off spinner Aseeb Khan before he smashed the said bowler over mid-wicket for six.
Khan then bowled Boodie for 12 with the score on 39-2. Savory and Jason Heyliger then consolidated to stabilise the innings with level-headed batting. Savory took boundaries off Khan and Gordon while Heyliger pulled Paul Simbu to the mid-wicket fence as they continued to accumulate runs on both sides of the wicket.
Left arm spinner Ricardo Adams then trapped Heyliger lbw for 22 off 46 balls before Savory smashed Khan over cover for six to bring up his fifty off 53 balls. The left-handed Savory continued to accumulate runs untroubled and smashed Khan for a six and a four before he was lbw to Adams for 73 with the score on 131-4; he struck five fours and two sixes.

Adams then had Dexter George (00) caught at the wicket and trapped Trevor Benn (00) lbw to achieve his hat-trick in his final over; he bagged 4-28 off six overs. Sheldon Alexander slammed Tulsieram Premnauth for consecutive sixes, glanced Seenarine Oudit for a four and struck him for six before he was caught at long-on off the final delivery of the innings for 46 off 44 balls. Ryan Hercules was not out on 12 as East Bank Essequibo finished on 180-7.
Leguan’s reply got off to a bad start when Mark Williams was run out without scoring. Williams played medium-pacer Javed Shafeek to point and took off for a single, the throw came into wicket-keeper Kemol Savory who fumbled giving fellow opener Huckumchand Savitir enough time to complete the run.
Even though Williams ended up at the non-striker’s end and lost his footing, Savitir refused to run. Arjune Ajmal was then bowled playing back to Shafeek as Leguan lost two wickets without a run on the board.
However Savitir hit Benn and Shafeek for fours before he attempted a wild swipe off Benn and lost his stumps for 11 with the score on 23. Skipper Ricardo Adams cut the lively Benn to point but Heyliger failed to hold on to a difficult chance and the ball went into the third-man boundary. Adams top edged a hook off the next ball to the fine-leg boundary before pulling Benn to the mid-wicket fence in his following over as he added 77 in 10 overs with Tulsieram Premnauth to steady the chase.
Premnauth took consecutive boundaries off Benn while the left-handed Adams hit Stephon Johnson for four through mid-wicket and soon brought up his fifty with a double off Fredericks. Adams was then stumped off left arm spinner Hemchand Persaud for 52 which contained four fours and one six off 57 balls.
Leguan then lost Brian Hubbert and Zahir Razack, both without scoring off Fredericks as they slipped 103-6. Premnauth struck Persaud for six and smashed Fredericks for four as he continued to take the fight to the opposition.
But East Bank struck in quick succession removing Seenrine Oudit (05) and Gordon (01) leaving the score at 127-8. Premnauth then smashed Fredericks for consecutive sixes to keep his team in hunt and soon reached his fifty.
East Bank Essequibo bowlers managed to restrict the scoring somewhat, but in an attempt to increase the scoring, Premnauth was bowled by Stephon Johnson for 69; he faced 59 balls and hit six fours and three sixes.
Leguan lost Gordon (01) and Oudit (05) in quick succession leaving Khan and Paul Simbu to get 18 from the final over. They managed 12 as Leguan ended on 174-9. Khan was unbeaten on 20 and Simbu on five.
Fredericks and Persaud claimed two wickets each while there was one apiece for Benn, Heyliger, Johnson and Shafeek. Savory and Adams were named players-of-the-match for their respective teams while Vijay Surujpaul of South Essequibo and Paul Simbu were rewarded for their outstanding performances in the preliminary round matches.
East Bank Essequibo collected a trophy and $75,000 while Leguan took home a trophy and $25,000. President of ECB Fizul Bacchus expressed gratitude to the Guyana Beverage Co. Inc. and Imam Bacchus and Sons for their support. Managing Director of Guyana Beverage Co. Inc Robert Selman congratulated both teams on an outstanding performance. 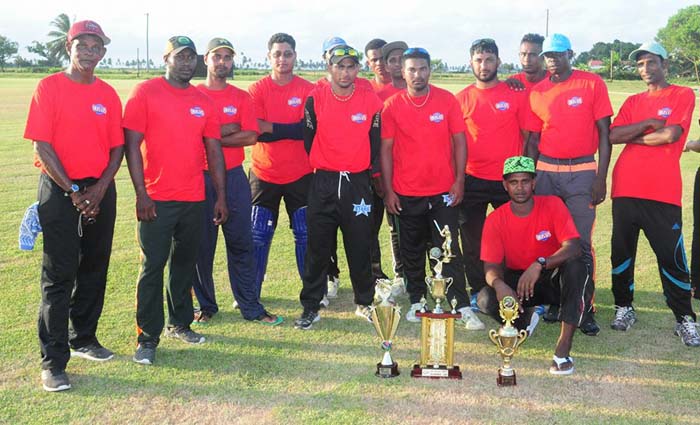 Toronto's Dominion Voting Systems sues Rudy Giuliani for $1.3B US
2 hours ago

Shuman: a PPP proxy
2 hours ago