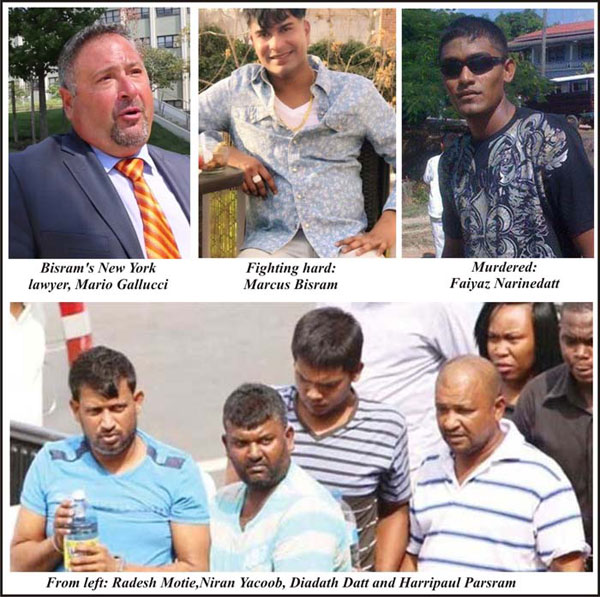 Embattled New York-based Guyanese businessman and philanthropist Marcus Bisram, is awaiting a court date in what could be the final hurdle in him being extradited.

In November, a few weeks after a New York judge ordered he be processed for extradition, Bisram’s lawyer, Mario F. Gallucci, of Helbock Nappa and Gallucci LLP, disclosed that he will be moving to file a Writ of Habeas Corpus.

That has been filed but a date has not been set. It will be the last process before Bisram is placed on a plane and sent to Guyana to face a murder charge.

A Writ of Habeas Corpus is used to bring a prisoner before the court to determine if the person’s imprisonment or detention is lawful.

“We expect that we will be successful on our Writ and Mr. Bisram will be immediately released.  He, as always, refutes all allegations and is quite aware that he is the victim of a corrupt Government. He understands that the Government is making false promises to the poor family of the deceased and just hopes that someday this family will realise that he in no way, shape or form had anything to do with this tragedy,” Gallucci said in November.

According to the lawyer, Bisram has always been a benefactor to Guyanese “since his great success in United States”.

“It should be noted that prior to this tragedy, Mr. Bisram was Guyana’s top benefactor.  He hopes that once he is released to be able to continue to assist his country both monetarily and also in removing the corruption which permeates the Government of your country.”

According to the lawyer, Bisram’s defense team is working closely with local counsel, Sanjeev Datadin, and will continue to do so until Bisram is vindicated.

On October 12, less than a year after a shocking case that alleged a police cover-up and attempted bribery of investigators into the killing of a Berbice carpenter, a New York court ordered Bisram be extradited to face the court in Guyana.

Bisram’s lawyers were told that in contrast to a criminal conviction, the certification for extradition is not directly appealable and is subject to a “limited review by way of a petition for a writ of habeas corpus to the district court.”

The lawyers were advised that Bisram’s last minute options of “Habeas Corpus” proceedings is available only to inquire whether the Judge had jurisdiction, whether the offence charged is within the treaty and, “by a somewhat liberal extension, whether there was any evidence warranting the finding that there was reasonable ground to believe the accused guilty.”

“If a habeas petition is filed, the Secretary (of State) will suspend review of the extradition matter, and will resume review only when and if the district court denies the petition. Consequently, there is no need to obtain any form of stay, provided that the habeas petition has been filed.”

Once the court has denied the habeas relief, Bisram has to surrender to Guyana. The US government also made it clear that it may oppose any application for a stay.

Bisram, well-known in Berbice for his philanthropic efforts to the police community and other charities, was expected to be handed over to the US marshals pending his extradition by the Secretary of State.

However, there are some formalities to be handled by the Secretary of State before he can be placed on a plane.

The processing of Bisram would come in seeming record time as it was only eight months ago that the Ministry of Foreign Affairs requested that he be sent back to Guyana to face a murder charge in the killing of Faiyaz Narinedatt.

The carpenter was allegedly dumped in the trunk of a car belonging to an acquaintance of the businessman, driven to a public road in Berbice and the scene made to look like a hit-and-run accident had taken place.

The businessman was arrested at a New York beach front property, in Far Rockaway, Queens; in early July after a US Judge had issued a warrant for him. Prior to that, Bisram was posted on the Interpol wanted list.

New York Judge, Peggy Kuo, filed the Certificate of Extraditability and Order of Commitment, paving the way for him to be sent back.

Unusual
It is not often that the US has extradited one of its citizens to Guyana. Guyana, on the other hand, has done so in a number of cases. The case would signal closer relations between Guyana and the US.

An extradition hearing was held on October 2, and according to Judge Kuo, after considering the evidence, in particular, the certified and authenticated documents submitted by the Government of Guyana, and the pleadings and the arguments of counsel, she has determined that her court has the jurisdiction to handle the proceedings.

Bisram’s lawyers had questioned whether there was indeed a treaty allowing the US to send back their client.

Acting United States Attorney, Bridget Rhode, representing the Department of Justice, Guyana’s equivalent to the Ministry of Public Security, wasted no time after the Judge’s order earlier this month.

In a filed letter to Bisram’s lawyers, Gallucci and Michael DeSantis, Rhode listed the next steps that will clear the way for the businessman to be sent back to Guyana.

Rhode explained that now the extradition order has been issued, the Secretary of State then has to determine whether to surrender the fugitive to the requesting state.

It was explained that typically, the fugitive is surrendered within two months of the issuance of the order.

Other arrests
Bisram’s alleged actions in November 2016 in Berbice, caused four men to be charged for the murder of Narinedatt.

She and Maryanne Lionel, 25, a bank teller of Republic Bank, also of Number 71 Village, Corentyne, Berbice were arrested during a sting operation.

They were charged for willfully attempting to pervert the course of justice.
The Preliminary Inquiries are ongoing in the local court with the High Court set to make a key ruling.

It was alleged that on November 19, 2016, at Eve Leary, Georgetown, they contacted a Detective Corporal and offered him $4M in cash to forgo charges against the four murder accused, who were at the time in custody pending investigations into the matter.

Bisram, described as a multi-millionaire and the founder of the Marcus Brian Bisram Foundation, is said to have donated $2M to a Berbice community policing group late last year and pledged $200M annually to the needy of the Ancient County.

It is alleged that Narinedatt was murdered between October 31 and November 1 at Number 70 Village, Corentyne, Berbice.

Narinedatt reportedly slapped and pushed away Bisram who allegedly ordered his friends to kill the carpenter.

It was reported that several men beat Narinedatt at the businessman’s premises. He was then taken to a roadway and beaten until he fell into a drain. The men reportedly took the carpenter by vehicle to Number 70 Village, Corentyne, Berbice, where they dumped the body and drove over it with a car.

Narinedatt had a son with wife, Pooja Pitam. His daughter was born after his death.

Pitam travelled to the US and was in front of the Brooklyn court in early July when Bisram was arraigned, two days after his arrest.

She was in tears while calling for justice during a television interview.
Bisram’s fall would shock friends and family. Living the dream life, he reportedly had a luxury apartment in the pricy Manhattan area and was very active on the social circuit and in the mandirs.

He reportedly left Guyana when he was a teen. He is 28 now and would have spent his August 20 birthday in jail, pending his extradition hearings.

He was reportedly close to a number of high-ranking police ranks in Berbice. Some of them allegedly, were fingered in attempting to cover the murder up.

Interesting developments after this pending decision.

There are many "community leaders" who were backing this Dude.

There are many "community leaders" who were backing this Dude.

Yes, there was even a Diwali boycott due to Lakshmi Singh position on the matter.

I believe he will get a fair trial guyana.

Welcome to the Original Guyanese Discussion Forums, first established in 1996. Here you can discuss, ask questions or generally debate anything related to politics, movies, music, health or just gyaff away your day/night here. A note of warning, the Political forum is not for the faint of heart.  We do have some rules, so please adhere to them.
Join Now
Private sector `gravely concerned’ about abrupt changes in polling places - -calls on GECOM to reverse decision
Soured relationship seen behind murder of Trinidad accountant
Keiler wins Courts Mashramani 50-miler in B/ce
Bent Street routs Rio All Stars 5-1 - —triumphs in Magnum Mash Cup Futsal final
Guyanese umpire Banwarie to make first-class debut
Guyanese women’s team selected for World Teams TT C/ship in S/Korea
Late changes made to list of polling places - -opposition-appointed commissioners
Sinclair donates cricket gear to Achievers SC
Current Visitors: 212 (13 members, 199 guests)
Our property taxes fund Catholic and Public schools in Canada and University is much more affordable compared to the USA. We are...
10 minutes ago

A thousand points is just 3.50%. Don't worry and invest for the long-term. We cannot predict the market in the short term but certainly...
16 minutes ago

I was pretty much non committed to any of the Democratic candidates until Bernie spoke about Castro. He has my vote now. It's a lesson...
22 minutes ago

That honour goes to Prashad.
29 minutes ago

Is this your contribution to GNI discussion ?
30 minutes ago

Bernie don't know how much it cost, but he thinks he knows who will pay
22 minutes ago

Zara has been suspended
29 minutes ago