Biden heckled over Obama-era deportations, tells protester 'You should vote for Trump'

A seemingly frustrated Joe Biden advised a protester to "vote for Trump" Thursday after being confronted about the Obama administration’s record on deportations.

It happened at a South Carolina town hall event for the former vice president, before about 800 people at Lander University in Greenville.

Biden seemed to lose his cool when Carlos Rojas, an immigration activist with a group called Cosecha Movement, pointed out that more illegal immigrants were deported during Obama's first two years as president than during Trump’s.

“In 2008 I was a volunteer for Obama because I had hope and I believed in the promises to the immigrant community," Rojas said. "The fact is that over those eight years there were three million people who were deported and separated from their families."

“No, I’m not going to do that, but I want to make sure that immigrant families … are not afraid and you have the power as a candidate to actually commit to stop all deportations from day one from executive action, and we want to hear you say that.”

This moment came shortly after Biden told another questioner that undocumented immigrants should “learn the language” to earn citizenship. https://twitter.com/ericbradner/status/1197686251819810816 …

Rojas and other protesters from the group were criticizing Obama-era deportations and asked Biden to say he’d end all deportations — which he rejected. 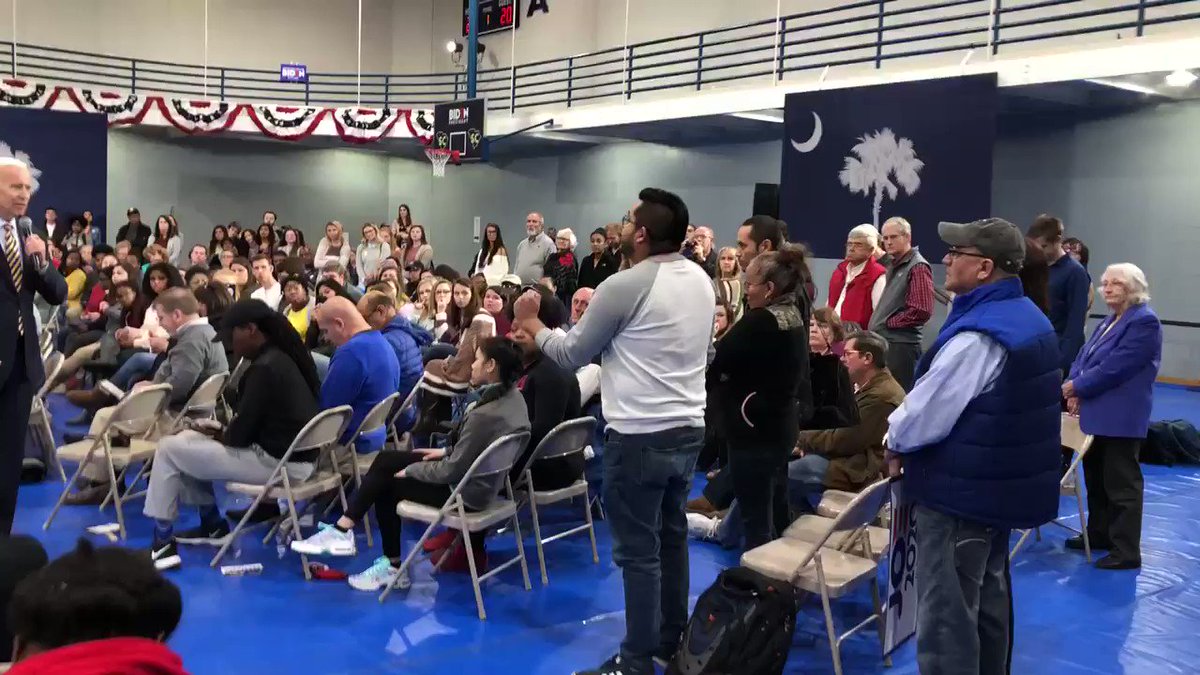 1,292 people are talking about this

“I will not stop all deportations. If you commit a crime, that’s a felony,” Biden affirmed.

At that point a group of protesters -- many holding signs reading “Not 1 More Deportation” – began to chant that very phrase, demanding Biden pledge to stop deporting all illegal immigrants if he’s elected president.

“No matter what happens, if someone commits perjury, they should be deported,” Biden pressed.

In an effort to quell protesters, Biden promised: “There will be no family separations under my … as president of the United States.”

“That’s a lie,” someone injected.

“That’s a lie, you said?” Biden responded. And the crowd erupted once more.

During the first three years of his presidency, Obama deported 1.18 million people, The Washington Post reported. Trump, despite promising in 2016 to deport “millions,” has deported less than 800,000 people during his first three years in office.

Under the Obama administration, Immigration and Customs Enforcement (ICE) deported more than 385,000 people each year in fiscal years 2009-11. The rate spiked in 2012 when 409,849 deportations were carried out, Axios reported, citing Department of Homeland Security records. The Trump administration has not carried out more than 260,000 deportations in a single year, according to the Post.

These numbers drew the ire of protesters during a July Democratic presidential debate.

CNN moderator Don Lemon asked Biden: “In the first two years of the Obama administration nearly 800,000 immigrants were deported, far more than during President Trump’s first two years. Would the higher deportation rates resume if you were president?”

“Absolutely not,” Biden responded. He briefly took a swipe at fellow candidate Julian Castro, who served as Obama’s secretary of Housing and Urban Development, before protesters cut him short.

Also at the town hall Thursday, after a student asked how Biden would address illegal immigration, Biden said the federal government needs “to produce a path to citizenship for the 12 million undocumented people in the United States,” according to IndexJournal.

“We are denying access to people who seek asylum,” Biden said. “The separation of families and putting kids in cages is brutal.”

Hehe, and they will!  This is almost as senseless as Hillary Deplorables comment!

Asylum is being exploited!  For example, people are using the DV excuse but there is no filings in their home country!

Hehe, and they will!  This is almost as senseless as Hillary Deplorables comment!

Biden is the male version of Hillary

Biden is an ass kisser. He really kissed Obama ass.

Sign In To Reply
Post
Current Visitors: 36 (5 members, 31 guests)
Welcome to the Original Guyanese Discussion Forums, first established in 1996. Here you can discuss, ask questions or generally debate anything related to politics, movies, music, health or just gyaff away your day/night here. A note of warning, the Political forum is not for the faint of heart.  We do have some rules, so please adhere to them .
Do not post any messages that are obscene, vulgar, sexually-orientated, racist, hateful, threatening, or that otherwise violate any laws. Do not post any messages that harass, insult (name calling), belittle, threaten or mock other members.

Join Now
Mitwah replied:
And this group only represents 53% of the populace. A working lunch and fete at the tax payers expense.

Shuman: a PPP proxy
3 hours ago