Berbicians are feeling a bit more at ease after news broke that ranks from the Major Crimes Unit, together with Berbice police ranks, were successful in arresting members of a gang that were wreaking havoc in the ancient county recently. 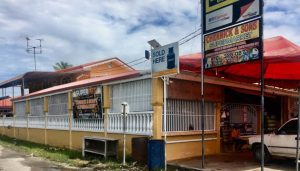 Police sources have since confirmed that a well known businessman from Arch Road, Rose Hall Town who operates a liquor and grocery store, his son and several others were arrested. Reports are that police who had set up an operation to net the suspects, intercepted a car during a road block at the Number 51 Police Station. Based on intelligence received, the car with three occupants that were heading east was searched. During the search, police discovered several suspicious items inclusive of ski-masks, dark coloured clothing, ammunition and guns. They were immediately taken into custody and the car lodged.
A police source disclosed that during questioning, the businessman from Rose Hall was fingered as an accessory since he would reportedly sell the items his son and accomplices steal.
Information provided to this publication revealed that the men were on their way to Skeldon to commit another armed robbery. They have since allegedly confessed to being a part of the gang that has committed several robberies on the Corentyne and Canje. One major robbery that they have reportedly confessed to was one at the Chennick and Sons Supermarket where the proprietor was beaten before they stole a chest containing a large sum of cash.
The men also reportedly admitted to using AK-47 rifles to commit the crimes. It is unclear if that calibre of firearm was found.

Gone are the days when robberies were committed at knife point. The AK 47 is not something to mess with. It is the most popular assault rifle on the planet. And Guyana seems to have a lot of them n the wrong hands.

During the PPP Govt the PNC used to borrow them from the GDF, many are still missing!!!

During the PPP Govt the PNC used to borrow them from the GDF, many are still missing!!!

Maybe Gagraj hid them and no one knows where.

Let us give credit to the cops for busting this ring.

Welcome to the Original Guyanese Discussion Forums, first established in 1996. Here you can discuss, ask questions or generally debate anything related to politics, movies, music, health or just gyaff away your day/night here. A note of warning, the Political forum is not for the faint of heart.  We do have some rules, so please adhere to them.
Privacy Statement - Rules
Join Now
Dat dag in dat cage is king tuh dem Chinee
2 minutes ago

China's Wuhan Coronavirus Spreads To Macau NEWS Chinese wet markets still selling bats 31st Mar 2020 7:29 AM Warning: Graphic As new...
5 minutes ago
Chinese wet markets that unleashed coronavirus on globe have reopened — and they're still selling bats 'The markets have gone back to...
8 minutes ago
This is very is very disturbing news. Guys, practice safety rules, social distancing, washing of hands, quarantine etc. I have a box of...
21 minutes ago
Cain just posted that China reopened markets selling snakes, bats, scorpions etc. This type of shyte has to stop. It will take a...
26 minutes ago
Shockingly, China’s Wet Markets are Reopening; Will We Ever Learn?
2 minutes ago
Guyanese are dropping with Corona
21 minutes ago

Is US now a shithole country?
26 minutes ago