One of the strangest Olympic bidding races in recent memory came to a surprising end Friday when Beijing, which staged the Summer Games seven years ago, was awarded the rights to the 2022 Winter Games, setting up the Chinese capital to become the first city to host both versions of the Games in more than a century of Olympic history.

Beijing’s victory was not the stunning part; given the commercial success of the 2008 Games, it was seen as a heavy favorite. What resonated was Beijing’s tiny margin of victory over the upstart bid from Almaty, Kazakhstan.

Beijing received 44 votes from International Olympic Committee delegates while Almaty received 40, a strong total indicating just how conflicted voters were over whether to give the Games to a country with plenty of resources but virtually zero winter sports history or send them to Central Asia for the first time in a still-developing former Soviet republic.

Ultimately, the voters opted for familiarity even if it may end up costing the event some authenticity. While Almaty’s bid highlighted the abundant mountains and plentiful snow that surround the city, Beijing’s plan relies on an extensive artificial snow-making operation and a new high-speed train project that, organizers said, will link the city with clusters of sites in the mountains as far as 90 miles away.

“It really is a safe choice,” Thomas Bach, the president of the International Olympic Committee, said. “We know China will deliver on its promises.”

Some I.O.C. voters — who are generally sports executives from countries around the world — also may have been thinking of nonsporting factors when they cast their votes. David Wallechinsky, president of the International Society of Olympic Historians, was in the room for the final bid presentations and said in a telephone interview: “Forty-four people voted for Beijing, but what are their motivations? A large number of the voters represent countries who don’t even take part in the Winter Olympics.”

Mr. Wallechinsky, who is not a voter, added: “So, the logistics for the athletes or the fans in terms of getting to venues may not be a big factor for them. Their agendas may have been very different. They may be thinking about how voting for China could help them down the road or how a few weeks in Beijing may be more preferable to a few weeks in Almaty.”

Certainly Beijing’s status as a tourist destination was a factor. Glitz, money, experience and a seven-foot former basketball star in a comedic turn were the key components to Beijing’s presentation to the I.O.C. voters, as the Chinese bid highlighted its memorable staging of the 2008 Summer Games.

Yao Ming, the former N.B.A. center, played a hockey goalie during a video that was played for voters, and bid officials emphasized how Beijing had shown itself to be an important partner with the Olympic movement after spending at least $40 billion to host the Games previously. Mr. Wallechinsky said he perceived some observers as being disgusted by the presentation.

“It was basically: ‘Last time we held the Olympics we earned a billion dollars. So you should vote for us,’ ” he said. But many others were surely swayed by the possibility of increased exposure to winter sports for some 300 million people in northern China.

China has created a special program, said to have cost about $30 million, that is intended to produce athletes in sports with little history in the country, like Nordic combined skiing and the sliding sports of luge, skeleton and bobsled.

Beijing plans to use some of its venues from the Summer Games, including the Bird’s Nest stadium and the Water Cube arena. At the Olympic Green on Friday, hundreds of people gathered to celebrate the announcement. People waved giant Chinese flags, and dancers in red robes performed traditional songs.

“Winning the bid will surely make more people know about China, that we are a major power now, and we are no worse than the United States,” said Zhang Zhaoshi, 76. “The victory will surely allow us Chinese to speak more confidently in the world.”

Some Beijing residents said they looked forward to cleaner air now that the government would face international pressure to improve the environment. Others said they thought the flood of tourists and investment would help improve the local economy, which has slowed recently.

But the celebration seemed somewhat muted compared with the euphoria of 2001, when it was announced that Beijing had won its bid for the 2008 Summer Olympics. Part of that is almost certainly because of Beijing’s less-than-wintry climate.

“We are not that enthusiastic about it because it is not the Summer Olympics but only the Winter Olympics,” said Wu Xiaowen, 46, an accountant in Beijing. “We don’t play or watch those games.”

Almaty, on the other hand, has little experience hosting big events, but it does have plenty of nearby mountains. Almaty, which is a commercial hub in oil-rich Kazakhstan, tried to position itself as the opposite to what it suggested was Beijing’s manufactured bid — Almaty’s slogan was, pointedly, “Keeping It Real” — and the former Kazakh capital cited the compact nature of its city. During its bid videos, there were many images of deep snow.

All of the venues in Almaty, organizers said, would have been within an 18-mile radius, and 70 percent of the necessary venues were in place before the vote. Kazakhstan’s prime minister, Karim Massimov, gave a stirring final speech for the bid in which he exhorted voters to “have faith in us” and to view Almaty as “a golden opportunity to prove that smaller, advancing nations can successfully host the Winter Games.”

A crowd of several hundred, mostly students and government workers, awaited the decision Friday on a warm afternoon outside the Republic Palace in Almaty. After watching the announcement of Beijing’s victory on a large screen, the crowd was mostly silent before quickly dispersing.

Bid organizers said it was likely that Almaty would try to win the rights to a future Games, but Kazakhstan only gained its independence in 1991 and its citizens were divided on whether hosting an Olympics was a wise move for a nation that is still developing in so many ways.

“The Olympic Games are not for us,” Sagyn Ayimbetova, 40, who has lived in Almaty for 26 years, said afterward. “It would be a hit for our budget and we would lose so much money. I was afraid our economy would fall down after the Games. So I am happy the committee made a good choice.”

The cost of hosting an Olympics has become a recurrent talking point for Mr. Bach. One of his primary initiatives, known as Olympic Agenda 2020, is essentially an overhaul of the bidding process. The goal is to force cities to lower infrastructure costs — and thus broaden the pool of potential bid cities — but also to meet basic human rights conditions before they will be fully considered.

It is so pathetic there were only two contenders for the host of the 2022 Olympic Winter Games. Both are poor choices. No developed...

This election was the final one before the rules of the Agenda 2020 program take effect, and many critics of the bidding process noted that it was, in many ways, a fitting coda. Bidding for the Winter Olympics, which are both significantly smaller and less popular than the Summer Games, has always been difficult, but this race was particularly rocky.

Four European cities, including winter havens like Oslo and Stockholm, pulled out after initially expressing interest; all cited various political or financial concerns, as well as soft public support. Those departures left behind only two viable candidates, both of which came with question marks.

Kazakhstan’s human rights record, particularly when it comes to freedom of speech and assembly, as well as tolerance for the L.G.B.T. community, has been criticized by numerous activist groups, while the global political concerns with China’s government are well known. Minky Worden, the global initiatives director at Human Rights Watch, said the current situation in China might best be described as “the worst crackdown in the post-1989 period across the board.”

According to Sophie Richardson, China director at Human Rights Watch, “The Olympic motto of ‘higher, faster, and stronger’ is a perfect description of the Chinese government’s assault on civil society: more peaceful activists detained in record time, subject to far harsher treatment.”

Ms. Richardson added: “In choosing China to host another Games, the I.O.C. has tripped on a major human rights hurdle.”

There is also concern over Beijing’s environmental situation, as air pollution has continued to be a problem and some experts have questioned how the proposed snow-making operation would affect the region ecologically. Organizers played down these concerns, saying the Chinese government was committed to protecting the environment.

After several days of buildup during the I.O.C.’s congress, the delegates finally recorded their votes — on paper, after an initial round of electronic balloting failed because of glitches — and opted to make history with China, which had never bid for an Olympics before the early 1990s but has now won the rights to two in the past 14 years.

Mr. Bach’s announcement of the winner prompted much hugging and dancing from the Chinese delegation in the audience.

“My reaction was kind of slow,” said Mr. Yao, the former basketball star, “because it’s still hard to believe that we actually won.” 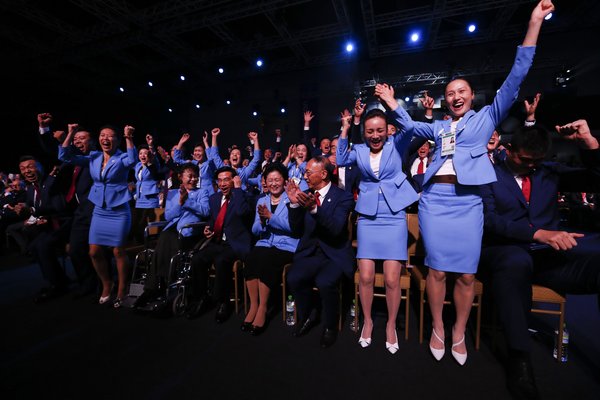 Members from the Beijing delegation celebrated after their city was awarded the hosting rights to the 2022 Winter Olympics at the International Olympic Committee meeting in Kuala Lumpur, Malaysia, on Friday. Credit Pool photo by Vincent Thian 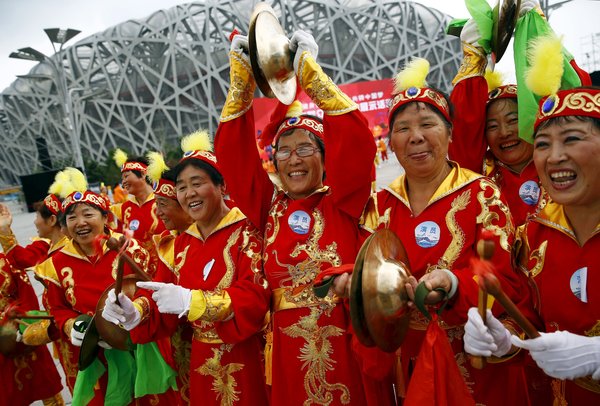 Performers outside the National Stadium in Beijing on Friday cheered before the International Olympic Committee announced that the city had won its bid to host the 2022 Winter Games. Credit Damir Sagolj/Reuters 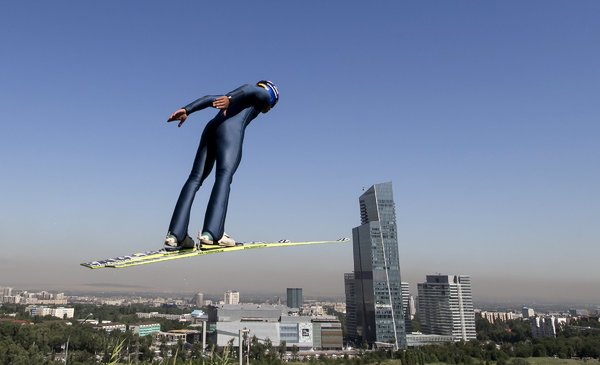 Welcome to the Original Guyanese Discussion Forums, first established in 1996. Here you can discuss, ask questions or generally debate anything related to politics, movies, music, health or just gyaff away your day/night here. A note of warning, the Political forum is not for the faint of heart.  We do have some rules, so please adhere to them.
Join Now
Loading...
Current Visitors: 195 (11 members, 184 guests)

It is interesting that the Democrat establishment wants Bernie out and the leftists media are promoting Bloomberg. This is a huge...
6 minutes ago

I believe with that amount of money, every Guyanese could have 30M dollars .. where are the government supporters—- hiding in shame.
15 minutes ago

Ralph Ramkarran, A New & United Guyana.. will he make it to the finish line...
29 minutes ago

Massive reduction of polling places by GECOM-- VOTER SUPPRESSION.
30 minutes ago
Guyana’s share of Liza crude to be traded at around minus $1.50/b versus Dated Brent
33 minutes ago